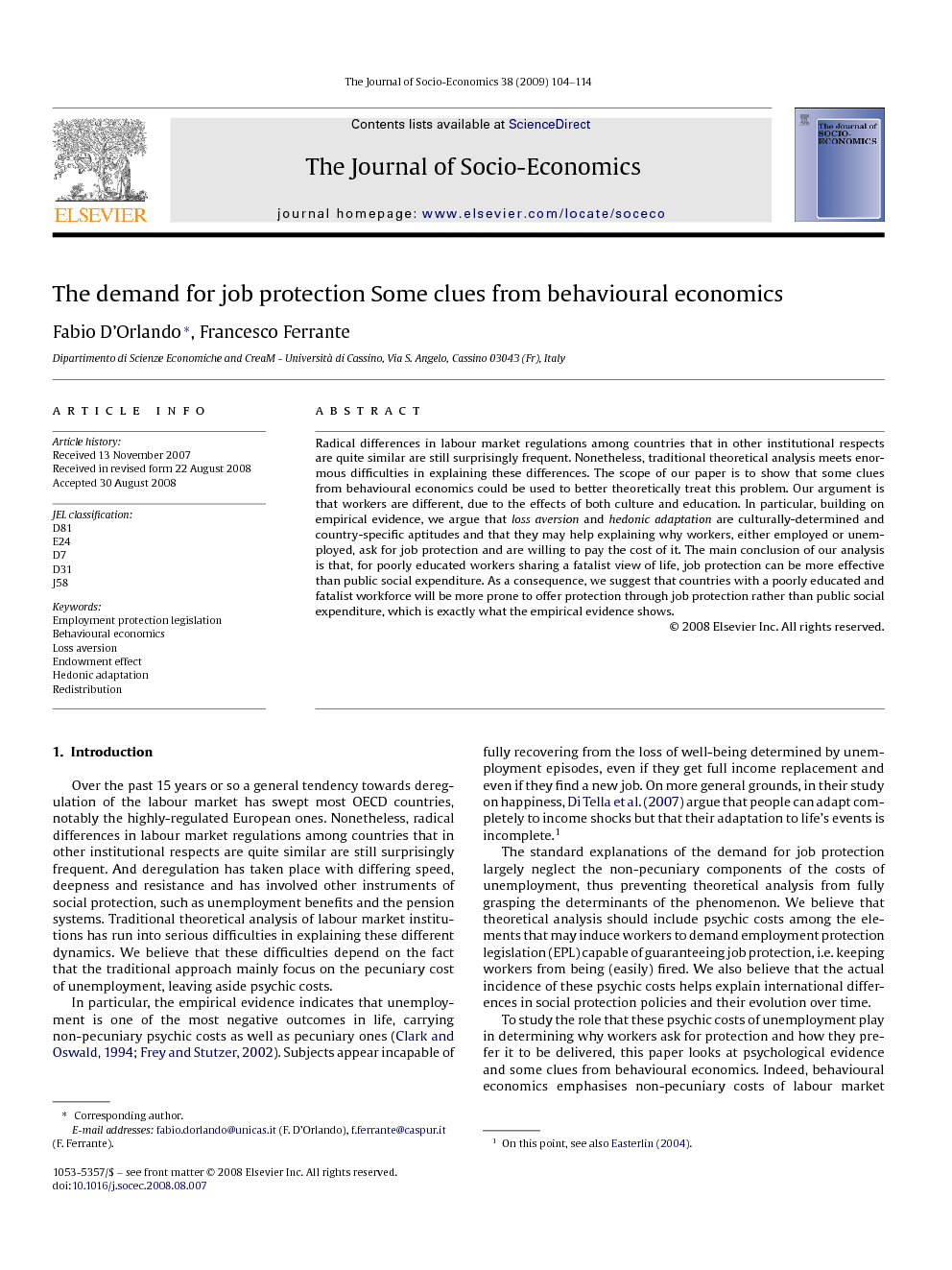 Radical differences in labour market regulations among countries that in other institutional respects are quite similar are still surprisingly frequent. Nonetheless, traditional theoretical analysis meets enormous difficulties in explaining these differences. The scope of our paper is to show that some clues from behavioural economics could be used to better theoretically treat this problem. Our argument is that workers are different, due to the effects of both culture and education. In particular, building on empirical evidence, we argue that loss aversion and hedonic adaptation are culturally-determined and country-specific aptitudes and that they may help explaining why workers, either employed or unemployed, ask for job protection and are willing to pay the cost of it. The main conclusion of our analysis is that, for poorly educated workers sharing a fatalist view of life, job protection can be more effective than public social expenditure. As a consequence, we suggest that countries with a poorly educated and fatalist workforce will be more prone to offer protection through job protection rather than public social expenditure, which is exactly what the empirical evidence shows.

Over the past 15 years or so a general tendency towards deregulation of the labour market has swept most OECD countries, notably the highly-regulated European ones. Nonetheless, radical differences in labour market regulations among countries that in other institutional respects are quite similar are still surprisingly frequent. And deregulation has taken place with differing speed, deepness and resistance and has involved other instruments of social protection, such as unemployment benefits and the pension systems. Traditional theoretical analysis of labour market institutions has run into serious difficulties in explaining these different dynamics. We believe that these difficulties depend on the fact that the traditional approach mainly focus on the pecuniary cost of unemployment, leaving aside psychic costs. In particular, the empirical evidence indicates that unemployment is one of the most negative outcomes in life, carrying non-pecuniary psychic costs as well as pecuniary ones (Clark and Oswald, 1994 and Frey and Stutzer, 2002). Subjects appear incapable of fully recovering from the loss of well-being determined by unemployment episodes, even if they get full income replacement and even if they find a new job. On more general grounds, in their study on happiness, Di Tella et al. (2007) argue that people can adapt completely to income shocks but that their adaptation to life’s events is incomplete.1 The standard explanations of the demand for job protection largely neglect the non-pecuniary components of the costs of unemployment, thus preventing theoretical analysis from fully grasping the determinants of the phenomenon. We believe that theoretical analysis should include psychic costs among the elements that may induce workers to demand employment protection legislation (EPL) capable of guaranteeing job protection, i.e. keeping workers from being (easily) fired. We also believe that the actual incidence of these psychic costs helps explain international differences in social protection policies and their evolution over time. To study the role that these psychic costs of unemployment play in determining why workers ask for protection and how they prefer it to be delivered, this paper looks at psychological evidence and some clues from behavioural economics. Indeed, behavioural economics emphasises non-pecuniary costs of labour market flexibility which the standard approach to decision-making generally ignores. We focus on the role of some related phenomena examined in economic psychology: loss-aversion ( Tversky and Kahneman, 1991 and Kahneman et al., 1991), the endowment effect ( Knetsch and Sinden, 1984, Knetsch, 1989, Kahneman et al., 1990 and Kahneman et al., 1991), the status quo bias ( Samuelson and Zeckhauser, 1988 and Kahneman et al., 1991), and hedonic adaptation ( Clark and Oswald, 1994 and Frey and Stutzer, 2002). The inclusion of these phenomena and the analysis of their cultural determinants allows a more robust explanation of the demand for job protection and its relationship with workers’ education. In particular, building on Ferrante (2004) and Bènabou (2000b), we show that workers’ educational attainment is a fundamental factor in explaining the demand for job protection and that our interpretative framework helps explain the choice between EPL and social public expenditure (SPE) within Europe. The basic intuition is that education mitigates the adverse effects of fatalism on workers’ perception of employment and income opportunities. According to this argument, EPL appears to be more effective to protecting poorly educated workers by reallocating the non-pecuniary costs of unemployment, than social insurance tools such as unemployment benefits (UBs) or other social programmes (i.e. SPE in general). Hence, we argue that countries with poorly educated workers should be more prone to provide job protection norms than SPE: exactly what empirical evidence shows. The basic conclusion is that flexibility (or inflexibility) is a behavioural attitude of individuals, that is affected primarily by culture and education, and not a normative characteristic of labour markets. But, whereas culture cannot be modelled by politicians and takes a long time to change, education can be affected through appropriate policy measures. The paper is organized as follows. Section 2 offers some preliminary empirical evidence on how OECD countries provide protection by combining EPL and SPE. Section 3 gives an overview of the standard explanations of the determinants of demand and supply of social protection. Section 4 extends this analysis by focusing on some insights from behavioural economics. Section 5 describes the main policy implications of our analysis and draws the conclusions.

The joint impact of loss aversion and hedonic adaptation on well-being should lead workers to be willing to pay the cost of waiting longer for a new job in exchange for a lower frequency of unemployment. This latter attitude may explain why labour market reforms meet so much resistance. The experimental evidence provided by psychological studies and casual observation both support the view that loss aversion and hedonic adaptation are pervasive phenomena that economists should take much more seriously into account in building models aimed at policy prescriptions. As for the rationale for regulating or deregulating labour markets, the arguments developed offer guidance for policy makers concerning the efficiency and feasibility of reforms. First, policies that aim at increasing microeconomic flexibility should be primarily concerned with removing the causes of inflexible attitudes. Since the demand for job protection is negatively related to workers’ skill level, education and training policies may be powerful instruments to reduce the need for social protection and the political opposition to reforms. Second, on grounds of feasibility, the time span for reform in poorly educated and fatalist countries (such as Italy, Greece, Portugal and Spain) is a crucial variable, since educational attainment and age have been shown to be key factors in the status quo bias. The speed of reduction of the demand for protection depends mainly on the speed of generational turn-over in the labour force and of the resulting build-up of human capital. Third, appropriate dual labour market reforms, generating flexibility at the margin and imposing heterogeneous job protection among workers with different ages and skills, can be efficient as well as fair as long as they provide different treatment for individuals endowed with different abilities to cope with change in occupational status. Finally, we expect that in the presence of loss aversion and hedonic adaptation, stabilization policies may deliver a higher social dividend than is claimed by models based on risk averse agents (e.g. Lucas, 2003 and Barlevy, 2004), even when prices and wages are flexible. In particular, the pervasiveness and the actual impact of loss aversion, as measured by the ratio between selling and purchasing prices, and the incidence of the non-pecuniary costs of unemployment, all suggest that the loss of well-being due to economic fluctuations is substantial indeed and that the share of that cost due to pure risk aversion is quite small.