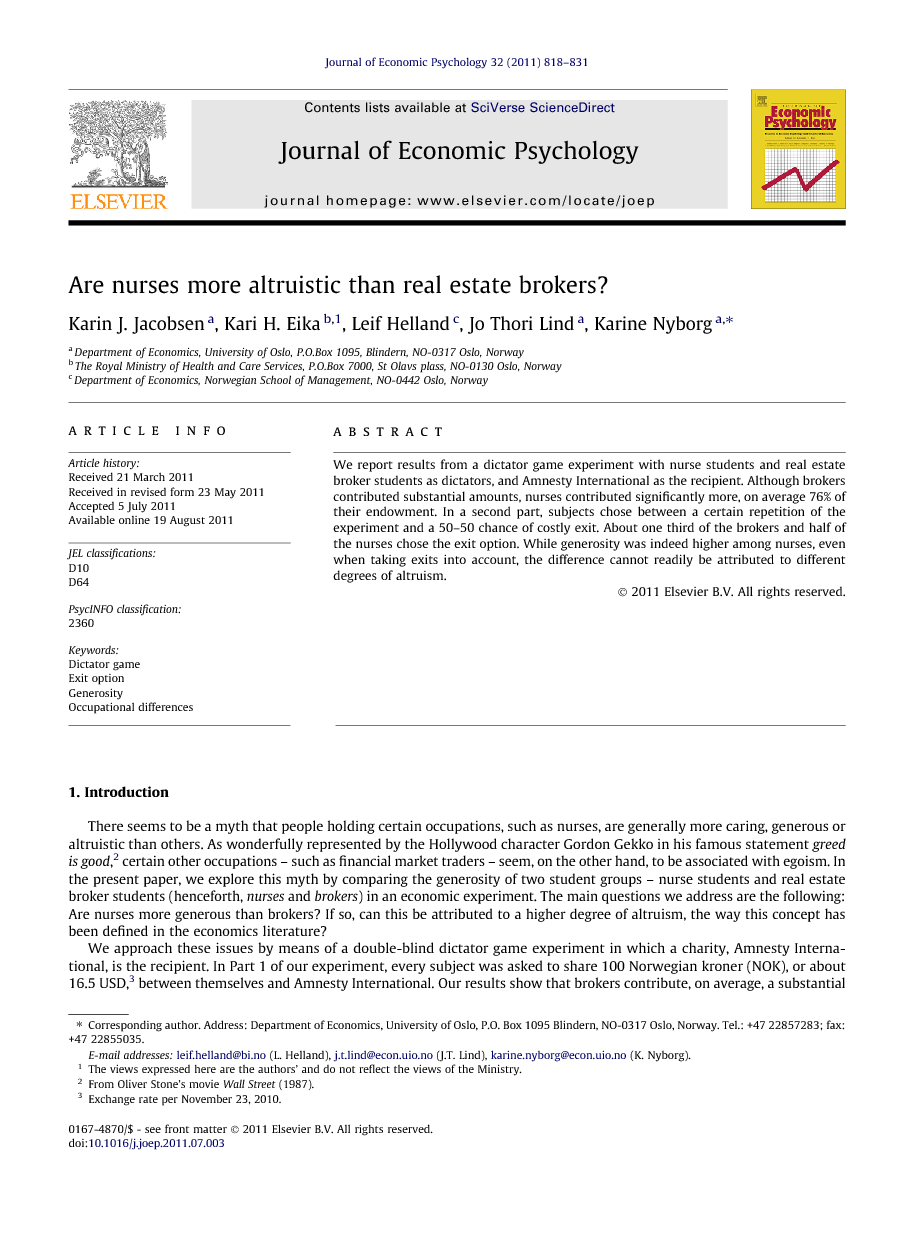 We report results from a dictator game experiment with nurse students and real estate broker students as dictators, and Amnesty International as the recipient. Although brokers contributed substantial amounts, nurses contributed significantly more, on average 76% of their endowment. In a second part, subjects chose between a certain repetition of the experiment and a 50–50 chance of costly exit. About one third of the brokers and half of the nurses chose the exit option. While generosity was indeed higher among nurses, even when taking exits into account, the difference cannot readily be attributed to different degrees of altruism.

There seems to be a myth that people holding certain occupations, such as nurses, are generally more caring, generous or altruistic than others. As wonderfully represented by the Hollywood character Gordon Gekko in his famous statement greed is good,2 certain other occupations – such as financial market traders – seem, on the other hand, to be associated with egoism. In the present paper, we explore this myth by comparing the generosity of two student groups – nurse students and real estate broker students (henceforth, nurses and brokers) in an economic experiment. The main questions we address are the following: Are nurses more generous than brokers? If so, can this be attributed to a higher degree of altruism, the way this concept has been defined in the economics literature? We approach these issues by means of a double-blind dictator game experiment in which a charity, Amnesty International, is the recipient. In Part 1 of our experiment, every subject was asked to share 100 Norwegian kroner (NOK), or about 16.5 USD,3 between themselves and Amnesty International. Our results show that brokers contribute, on average, a substantial 61% of their endowment; nurses’ contributions were significantly larger, however, reaching an average of 75%. Thus, in this particular context, nurses were indeed more generous than brokers. To our knowledge, the dictator behavior of neither nurses nor brokers has previously been explored in the literature. Our interest, however, lies not only with the level of generosity, but also with its possible underlying causes – in particular whether nurses have stronger preferences for others’ welfare. Dictator game giving is still not well understood; several recent studies indicate that care for the recipient’s welfare is not, in fact, the primary motive for dictator giving (e.g. Lazear et al., 2009 and List, 2007). Part 2 of our experiment is inspired by the work of Dana et al., 2006, Dana et al., 2007, Lazear et al., 2009 and Broberg et al., 2007. These authors show that when subjects are given the option to exit a dictator game, or when the consequence for others of the dictator’s choice is obscured, generosity is substantially reduced. In the second part of our experiment, therefore, subjects were given the choice between two options, A and B. Option A implied repeating the game from Part 1 with certainty. Option B implied a 50% probability of repeating the game from Part 1, and a 50% probability of receiving 90 NOK with no opportunity to donate to Amnesty International. Thus, option B implied a 50% probability of costly exit from the dictator game situation. Nurses were substantially more likely to opt for the exit alternative than brokers: 36% of brokers and 51% of nurses chose B. Interestingly, however, those subjects who opted for exit but drew a repetition of the dictator game contributed substantial amounts: 31% for brokers and 42% for nurses. Even after accounting for exit behavior, nurses were more generous than brokers (in Part 2 and in total). As we discuss in more detail below, this pattern of behavior is hard to reconcile with most standard models of social preferences. One possible explanation, however, could be that nurses experience a stronger sense of duty to conform with moral ideals (Brekke et al., 2003, Cappelen et al., 2007, Konow, 2010 and Nyborg, in press), and that this sense of duty applies more strongly to sharing decisions than to exit decisions.

Using a dictator game with a costly exit option and with Amnesty International as the recipient, we find that nurse students are more generous when placed in the role as dictators than real estate broker students. However, this finding cannot simply be explained by nurse students being more altruistic in the sense that they care more about Amnesty International, or in the sense that they care more about their own giving. If that was the explanation, we should not observe high exit rates among the nurse students. While about one third of the brokers chose the exit option, more than half of the nurse students did. However, when choosing an uncertain exit option but drawing another dictator game, not the exit, nurse students contributed substantial amounts, leaving them with much less money than what their payoff would have been with the costly exit. This is consistent with the idea that at least part of the observed generosity is caused by a sense of duty which is context-specific in the following sense: The obligation to contribute when placed in a sharing context, is stronger than the obligation to place oneself in a sharing context. That nurses are more generous in the role as dictators, but also more prone to opt for exit, might thus be explained by nurses experiencing a stronger sense of duty than brokers, and that this sense of duty does not apply equally strongly to the exit choice as to the sharing choice. If nurses are genuinely more altruistic towards others, the pleasure of helping would be a reward in itself, presumably stimulating generosity in predictable and stable ways. If nurses’ high generosity is, instead, motivated by context-dependent moral obligation, this might be different. Depending on the specific relationships between context and responsibility, obligations might be avoided, for example, by choosing another occupation; by turning one’s back to the needy; by reconsidering one’s belief about the strictness of identity requirements for one’s profession; or by otherwise redefining the situation as a less demanding one. Generosity caused by context-dependent moral obligation may thus possibly be more easily undermined, and more sensitive to seemingly unimportant contextual changes, than generosity driven by genuine altruism.