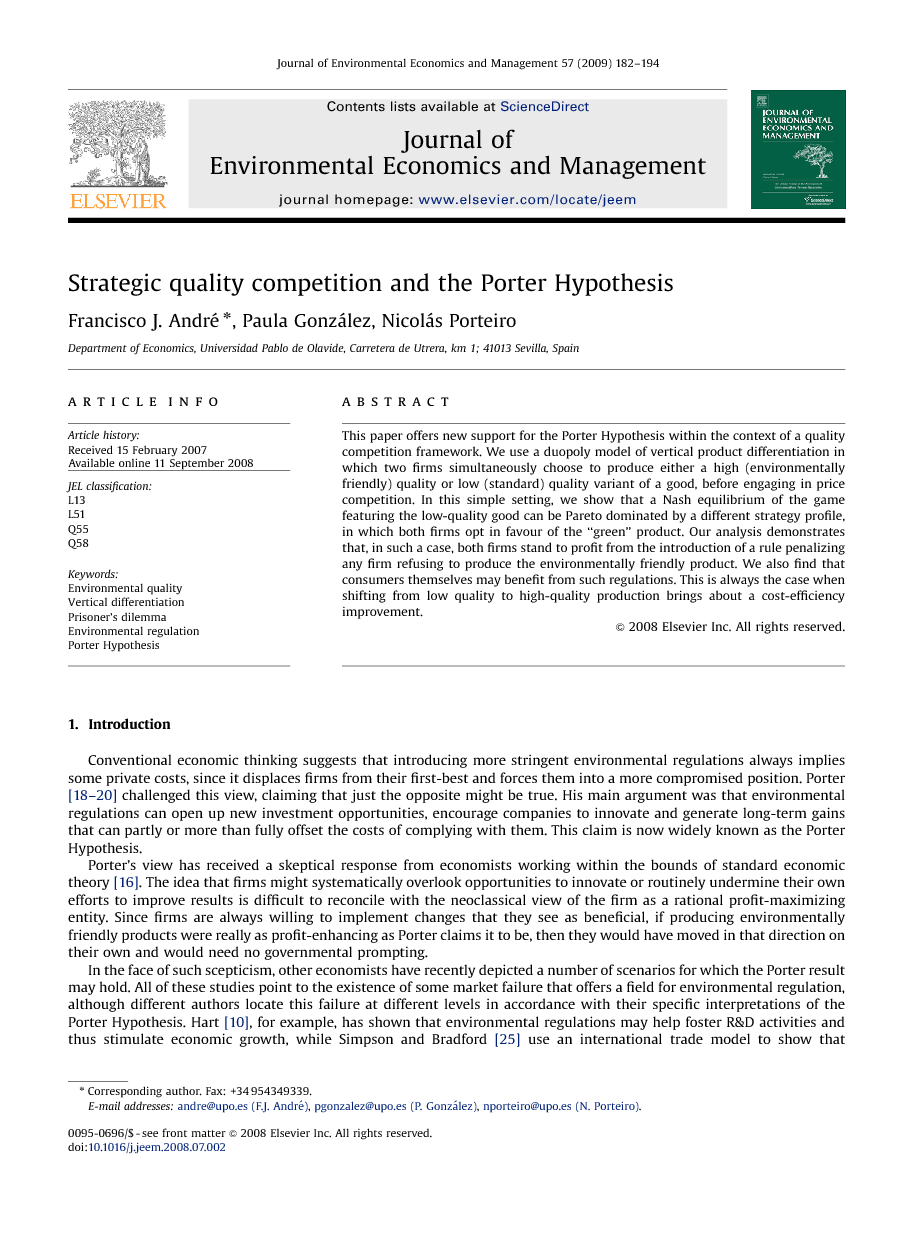 This paper offers new support for the Porter Hypothesis within the context of a quality competition framework. We use a duopoly model of vertical product differentiation in which two firms simultaneously choose to produce either a high (environmentally friendly) quality or low (standard) quality variant of a good, before engaging in price competition. In this simple setting, we show that a Nash equilibrium of the game featuring the low-quality good can be Pareto dominated by a different strategy profile, in which both firms opt in favour of the “green” product. Our analysis demonstrates that, in such a case, both firms stand to profit from the introduction of a rule penalizing any firm refusing to produce the environmentally friendly product. We also find that consumers themselves may benefit from such regulations. This is always the case when shifting from low quality to high-quality production brings about a cost-efficiency improvement.

In this paper, we have studied a duopoly model of vertical product differentiation in which firms simultaneously set the environmental quality of a given product and then engage in price competition. The structure of this game can result in a classical prisoner's dilemma in that, at equilibrium, both firms produce the standard variant of the good but stand to benefit from a joint decision to produce the more environmentally friendly variant. In this context, the implementation of a “green” policy may enhance the environmental quality of the product while simultaneously increasing firms’ private profits. Our analysis has stressed that environmental regulation can not only make firms more profitable, but it can also increase consumer surplus. This occurs when producing the environmentally friendly product turns out to be more cost-efficient than producing the standard variant. As a matter of fact, this is always the case when the fixed adoption cost represents the only extra expense associated with a firm's shift from a standard to an environmentally friendly variant of a given product. Public intervention is clearly warranted in such cases, since such regulation could be seen as a device to unlock the economy from an inefficient lock-in situation. Nevertheless, some caution should still be exercised when giving policy recommendations, especially when adoption of the cleaner technology implies higher marginal costs. While our model suggests a different avenue by which regulations may benefit both firms and consumers, it does not attempt to model some other important aspects of Porter's argument. We abstract from international competition and the potential for domestic firms to benefit from environmental regulation at the expense of their international rivals. In addition, we require neither the flexible regulations nor innovation that, according to Porter, were crucial in creating an environment where regulations may benefit firms. While other authors have explored each of these features in the context of the Porter Hypothesis, our point is that consumer preferences for “green” products may also favour the creation of a regulated environment in which firms stand to benefit from the sale of higher quality products at higher prices. Finally, we have used a specific policy instrument to obtain these results: a penalty or lump-sum tax on firms producing the low-quality variant of the product in question. This penalty can solve a coordination failure by inducing firms to move into a new profit-improving equilibrium. This coordination effect can also be extended to encompass more complex forms of environmental regulation, such as effluent taxes.