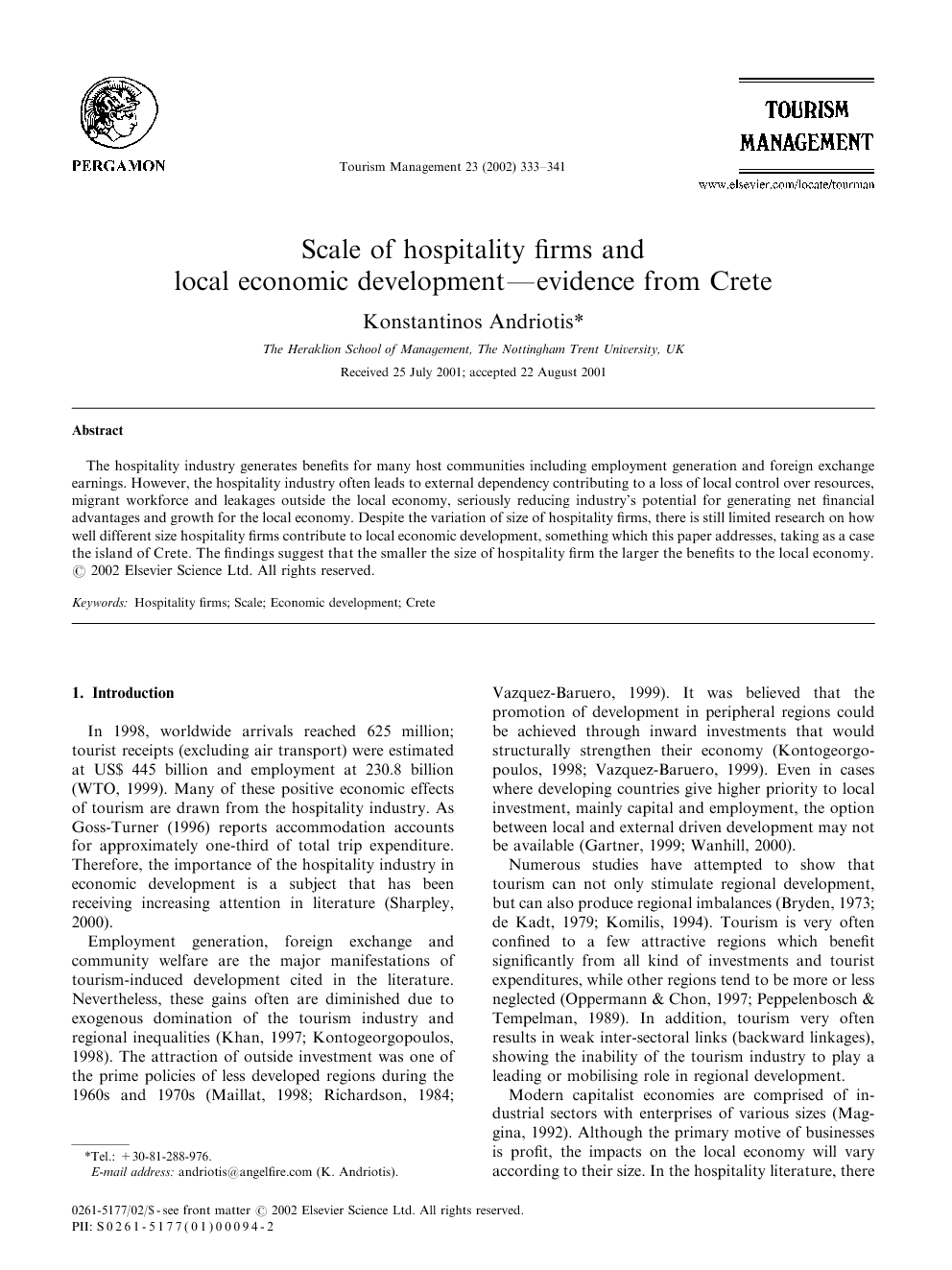 In 1998, worldwide arrivals reached 625 million; tourist receipts (excluding air transport) were estimated at US$ 445 billion and employment at 230.8 billion (WTO, 1999). Many of these positive economic effects of tourism are drawn from the hospitality industry. As Goss-Turner (1996) reports accommodation accounts for approximately one-third of total trip expenditure. Therefore, the importance of the hospitality industry in economic development is a subject that has been receiving increasing attention in literature (Sharpley, 2000). Employment generation, foreign exchange and community welfare are the major manifestations of tourism-induced development cited in the literature. Nevertheless, these gains often are diminished due to exogenous domination of the tourism industry and regional inequalities (Khan, 1997; Kontogeorgopoulos, 1998). The attraction of outside investment was one of the prime policies of less developed regions during the 1960s and 1970s (Maillat, 1998; Richardson, 1984; Vazquez-Baruero, 1999). It was believed that the promotion of development in peripheral regions could be achieved through inward investments that would structurally strengthen their economy (Kontogeorgopoulos, 1998; Vazquez-Baruero, 1999). Even in cases where developing countries give higher priority to local investment, mainly capital and employment, the option between local and external driven development may not be available (Gartner, 1999; Wanhill, 2000). Numerous studies have attempted to show that tourism can not only stimulate regional development, but can also produce regional imbalances (Bryden, 1973; de Kadt, 1979; Komilis, 1994). Tourism is very often confined to a few attractive regions which benefit significantly from all kind of investments and tourist expenditures, while other regions tend to be more or less neglected (Oppermann & Chon, 1997; Peppelenbosch & Tempelman, 1989). In addition, tourism very often results in weak inter-sectoral links (backward linkages), showing the inability of the tourism industry to play a leading or mobilising role in regional development. Modern capitalist economies are comprised of industrial sectors with enterprises of various sizes (Maggina, 1992). Although the primary motive of businesses is profit, the impacts on the local economy will vary according to their size. In the hospitality literature, there is a variety of studies which have researched various aspects of development for small firms (e.g. Beaver & Lashley, 1998; Friel, 1999; Getz & Carlsen, 2000; Glancey & Pettigrew, 1997; Holjevac & Vitodusic, 1999; Horobin & Long, 1996; Main, Chung, & Ingold, 1997; Morrison, 1998; Smith, 1998; Thomas, 1995; Williams, Greenwood, & Shaw, 1989). However, there is limited research for larger hospitality firms. The reason for this may be that the hospitality industry tends to be dominated by a large number of small firms operating alongside a few large ones (Shaw & Williams, 1994, p. 100). For example, Shaw, Williams, and Greenwood (1988) in Cornwall found that only 6.3 percent of the 159 hospitality firms interviewed had more than 40 rooms. Although there is a growing consensus that hospitality firms’ size has important influences on the economic development of a destination there has been a comparative neglect of tourism research into this issue. Notable exceptions include the studies of Kontogeorgopoulos (1998) and Rodenburg (1989) that investigate economic patterns of various size tourism enterprises and their contribution to local economic development. Bearing in mind the limited research on hospitality firms’ size variations, it is the aim of this paper to investigate how well different scales of hospitality firms contribute to local economic development taking as a case the island of Crete. It does this in five sections. These sections cover: the literature background; an examination of tourism and hospitality industry in Crete; the methodology of the study; the results of the study; and the conclusions.

The data presented in this paper emphasise the importance of studying the effects of different size hospitality firms. However, before any conclusions are drawn it is important to mention the limitations of this study. Due to the relatively small sample and the fact that the firms studied may not be representative of the hospitality industry of the island, caution needs to be applied in generalising the findings. In addition, a major problem faced in this study was the reluctance of many respondents to reply to questions related to financial and employment characteristics, something that prevented a better understanding of the contribution of the firms under investigation to local economic development. Despite those limitations, the study provides some insight into the effects of different size hospitality firms in the sample areas. From this research it was evident that the contribution of hospitality firms to local development is not uniform. In particular, larger hospitality firms tend to import managerial labour, compared to small- and medium-sized establishments, linkages for purchases of supplies from the local economy by large establishments fall dramatically, where smaller and medium-sized establishments tend to purchase locally and the smaller hospitality firms tend to employ a higher number of family members. The findings of this study are consistent with the findings of Rodenburg (1980) who found that “smaller scale enterprises offer a greater opportunity for profit and control to local people than do enterprises on a large scale” (p. 193). However, if this is the case why do incentives for new investments in Crete promote industrial scale hospitality firms? Although large-scale developments may increase public sector revenue through the easier control of large hospitality firms and increased taxation, they increase leakages, foreign employment, government expenditure on large-scale investments, and cumulate negative threshold effects. Therefore, Gannon (1993) suggests that “local entrepreneurs of small enterprises can, with modest outlay, contribute considerably to economic growth because they supply smaller markets, demand relatively small amounts of capital, use local resources and raw materials and do not require costly and sophisticated infrastructure” (p. 54). Likewise, Wilkinson (1989) believes negative effects can be lessened “if governments were to adopt policies which favoured small-scale development with a high degree of local involvement, thus avoiding dependence on multinational hotel chains” (p. 167). Therefore, programmes should be developed in Crete to assist small enterprises to survive and expand further since small-scale enterprises contribute better to local economic development and local people's welfare. In addition, to increase benefits from the local hospitality industry through higher participation of local investors in development, create employment opportunities for locals and reduce leakages from future developments, incentives should be given for the establishment of small-scale hospitality firms on the island, mainly in the underdeveloped southern and inland areas, where tourism activity is limited. However, mechanisms should be introduced to control their number, curb illegal building, eliminate the establishment and operation of unlicensed enterprises, as well as any kind of illegal transactions. To conclude, the study of hospitality firms scale in economic development is in its infancy, and as a result there is a dearth of reliable information. While the results presented in this paper give some insights into economic development aspects of different size hospitality firms, further research is necessary. A more certain impression of key issues related to size of hospitality firms and their impacts on local economic development should emerge giving the challenges which face hospitality in the near future resulting from the tension of globalisation of the industry. There is a need to establish a more permanent system of monitoring hospitality firms’ contribution to local development in order to help the public sector to adopt effective initiatives in the future.