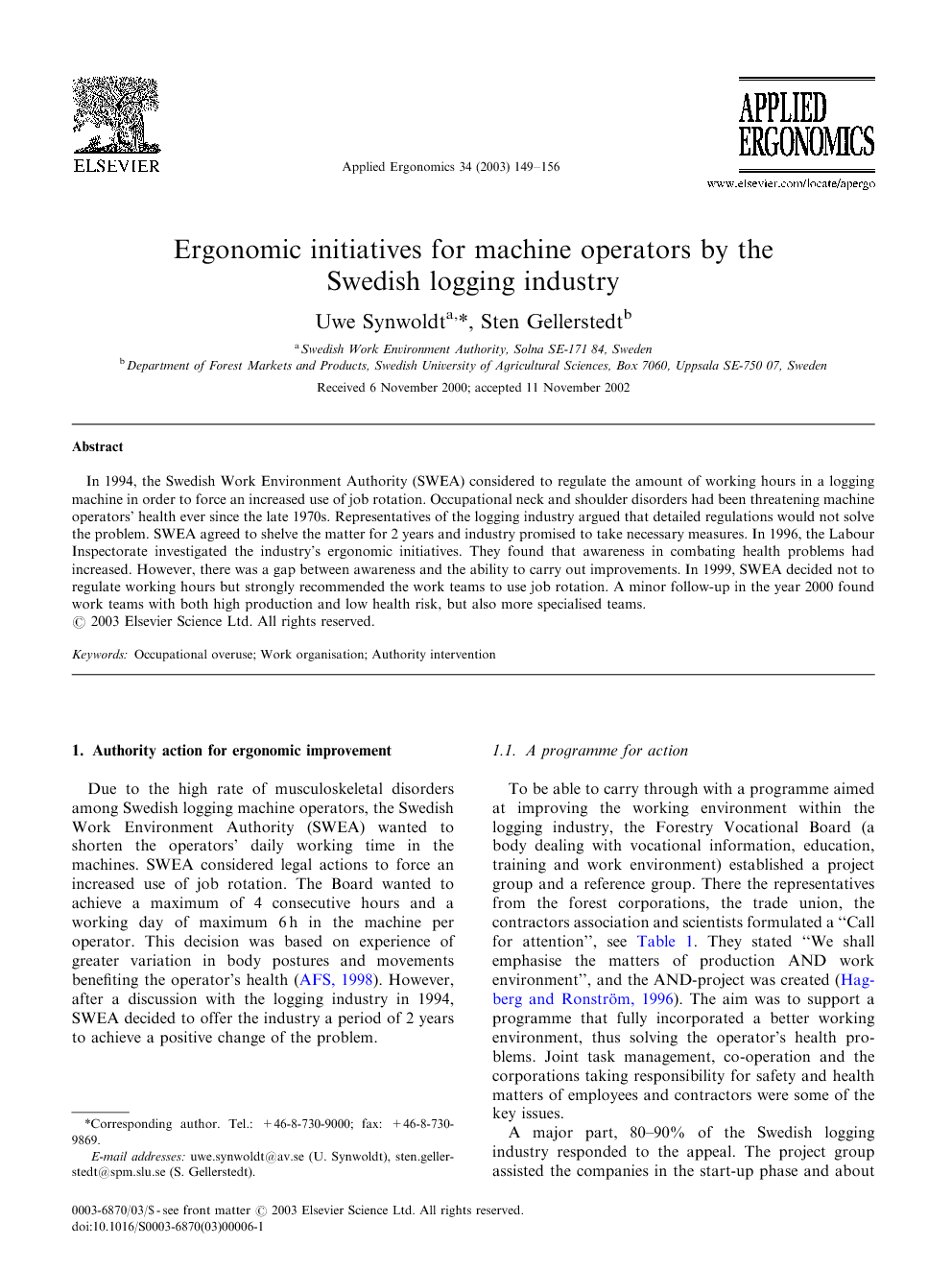 In 1994, the Swedish Work Environment Authority (SWEA) considered to regulate the amount of working hours in a logging machine in order to force an increased use of job rotation. Occupational neck and shoulder disorders had been threatening machine operators’ health ever since the late 1970s. Representatives of the logging industry argued that detailed regulations would not solve the problem. SWEA agreed to shelve the matter for 2 years and industry promised to take necessary measures. In 1996, the Labour Inspectorate investigated the industry's ergonomic initiatives. They found that awareness in combating health problems had increased. However, there was a gap between awareness and the ability to carry out improvements. In 1999, SWEA decided not to regulate working hours but strongly recommended the work teams to use job rotation. A minor follow-up in the year 2000 found work teams with both high production and low health risk, but also more specialised teams.

Due to the high rate of musculoskeletal disorders among Swedish logging machine operators, the Swedish Work Environment Authority (SWEA) wanted to shorten the operators’ daily working time in the machines. SWEA considered legal actions to force an increased use of job rotation. The Board wanted to achieve a maximum of 4 consecutive hours and a working day of maximum 6 h in the machine per operator. This decision was based on experience of greater variation in body postures and movements benefiting the operator's health (AFS, 1998). However, after a discussion with the logging industry in 1994, SWEA decided to offer the industry a period of 2 years to achieve a positive change of the problem. 1.1. A programme for action To be able to carry through with a programme aimed at improving the working environment within the logging industry, the Forestry Vocational Board (a body dealing with vocational information, education, training and work environment) established a project group and a reference group. There the representatives from the forest corporations, the trade union, the contractors association and scientists formulated a “Call for attention”, see Table 1. They stated “We shall emphasise the matters of production AND work environment”, and the AND-project was created (Hagberg and Ronström, 1996). The aim was to support a programme that fully incorporated a better working environment, thus solving the operator's health problems. Joint task management, co-operation and the corporations taking responsibility for safety and health matters of employees and contractors were some of the key issues. A major part, 80–90% of the Swedish logging industry responded to the appeal. The project group assisted the companies in the start-up phase and about 5000 persons received direct information. At each of the 28 participating companies, a contact person at central level was appointed to work with the AND-project. There were also three seminars for the purpose of experience interchange between the companies. One of the AND-project's cornerstones was that each forest company should set out clear aims and actively support the process of achieving them. This should be done in close collaboration with employees and contractors. There were three categories of aims, namely: creating variation at work, building good physical working environment and gaining psycho-social health and physical fitness. After the 2-year respite given by SWEA, the project group reported in 1996 on how far the companies had proceeded with the AND-project (Hagberg and Ronström, 1996). The results showed that 40% of the participating companies had managed to integrate the AND-project by supporting it on all corporation levels. About 20% of the companies were still in the start-up phase of the project, having received only weak support from their organisations. The remaining 40% had not succeeded in integrating the project in their production. In those companies, the working environment was governed by a person not working close to logging but whose main task was to meet official requirements. SWEA was not fully satisfied with these results but could not decide, on the information given by the industry, whether or not to regulate. In the winter of 1997/98, the Labour Inspectorate (LI) evaluated whether the logging industry had the potential to reduce the machine operator's health problems (Andersson et al., 1999). The aim was also to inform operators, contractors and forest companies about the risks for overuse symptoms and also about possible measures for the avoidance of musculoskeletal disorders and work accidents.

The logging industry had to show that they were able to solve the occupational health problems among machine operators. Hagberg and Ronström reported in 1996 that, 2 years after the start of the AND-project, 20% of the companies still were in the start-up phase and 40% had not started at all. The LI, however, found in their evaluation 2 years later that measures aimed at the prevention of health problems had increased. These measures included individual planning, more favourable shift forms, job rotation and pauses. The LI also judged the presence of a higher awareness as to how to prevent occupational health problems among operators, contractors and forest companies. Yet, a decrease in the operator's exposure during the period was hard to prove as well as a decrease in health problems. One reason discussed by the LI was the short time span since the start of the project. The aim of the LI's investigation was also to stimulate the process of integrating good work environment praxis into the daily logging work. A question in LI's study is the validity and reliability of the collected information regarding the operator's health. The interviewer asked at the same time about health status today and 3 years earlier. How clearly can people remember whether they experienced any musculoskeletal disorders 3 years earlier? When processing the answers, LI also forgot to exclude the operators who did not work 3 years ago. That makes it impossible to say anything about the trend in health complaints. Another weakness regarding the operators’ health is the difficulty of comparing previous studies with the present one. The question asked in questionnaire No. 1 was not in conformity with the Nordic Questionnaire (Kuorinka et al., 1987), which had been used in many earlier studies. This flaw could have been corrected by using the more detailed health data in questionnaire No. 3, but that was not done. The labour inspectors’ different experience and attitudes regarding forestry and its problem may have influenced the quality of the study. Some inspectors focused on technical problems, others on organisational matters. Data would probably have been more accurate if the inspectors had found shared ambitions for the investigation. An inspection in mid-Sweden showed a very low percentage of health complaints among the operators (Fredander et al., 1999), probably due to how the questions were asked. Scientific knowledge regarding questionnaires, available from a nearby University, were not utilised, probably due to lack of time. Another deficiency of the investigation was that data were never digitalised, which made it difficult to do additional analysis, e.g. regarding the health problems of the operator working both 1994/95 and 1997/98. We applied a Target Achievement Model (Vedung, 1994), to this analysis of the LI's evaluation. It was found to be a straightforward method, questions being asked about the target of the project formulated from SWEA's provisions about Ergonomics and Systematic Work Environment Management. The weakness of this model, however, is that it does not allow for analysis of costs and cannot trace unforeseen effects.