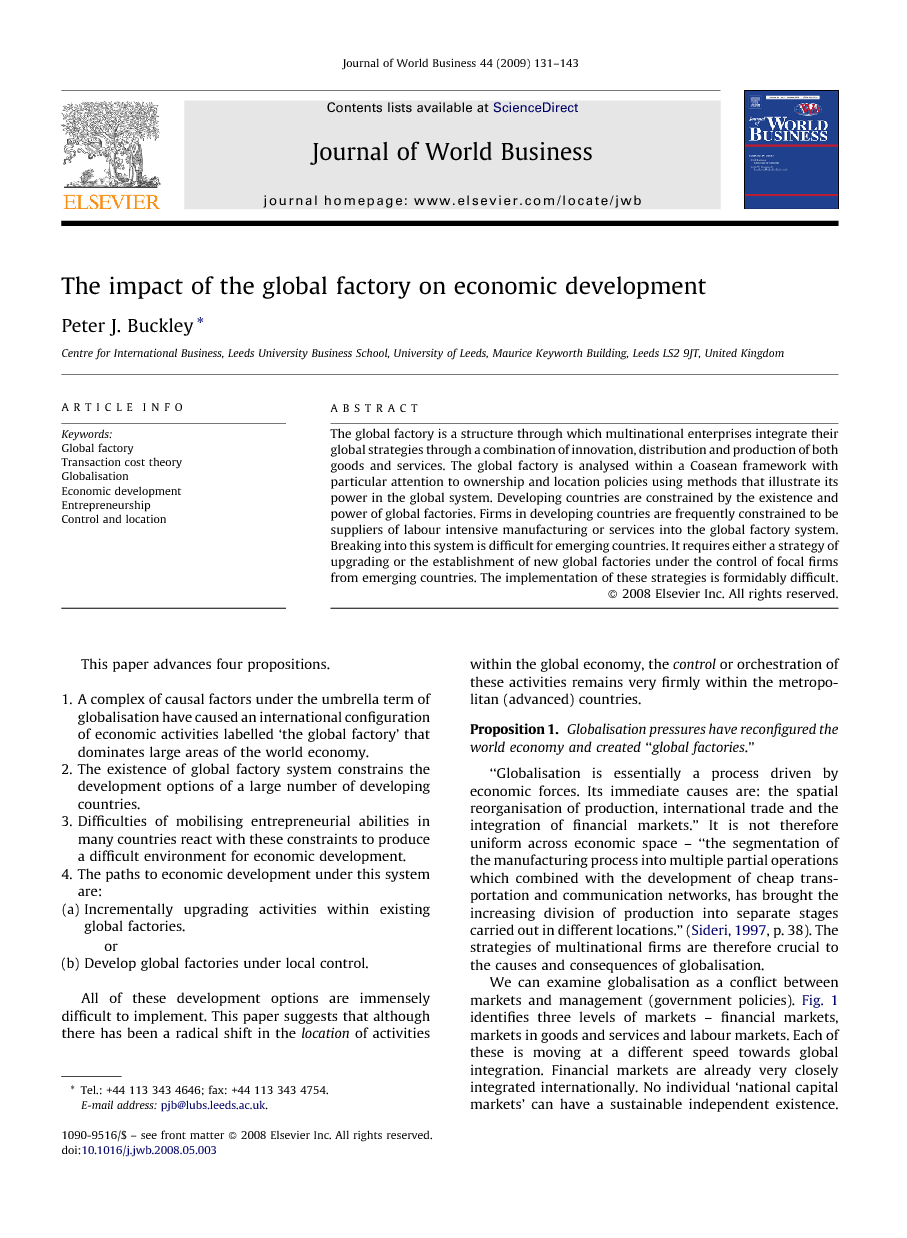 The global factory is a structure through which multinational enterprises integrate their global strategies through a combination of innovation, distribution and production of both goods and services. The global factory is analysed within a Coasean framework with particular attention to ownership and location policies using methods that illustrate its power in the global system. Developing countries are constrained by the existence and power of global factories. Firms in developing countries are frequently constrained to be suppliers of labour intensive manufacturing or services into the global factory system. Breaking into this system is difficult for emerging countries. It requires either a strategy of upgrading or the establishment of new global factories under the control of focal firms from emerging countries. The implementation of these strategies is formidably difficult.

From the literature dealing with Asia, we have learnt that rent-seeking has been a pervasive feature of practically all Asian countries, including those that have performed best during the last four or five decades. What distinguishes them is not the incidence of rent-seeking as such, but the organization of rent-seeking and the identity of rent seekers. The differences have historical origins going back to colonial times. In particular, the ‘fragmented clientelism’ afflicting the Indian subcontinent (India, Bangladesh and Pakistan), colonized by the British, seems to have been much less conducive to economic growth and efficiency than the pattern of coordinated and centralized patron–client flows found in South Korea and Taiwan, colonized by Japan. While in the former area, there existed decentralized centres of organizational and political power that had the ability to demand or protect redistributive rents effectively, in the latter countries, the central leadership of the state could use a carrot-and-stick strategy to induce learning but also block feather-bedding. As a result, in South Korea and Taiwan the rents of the emerging capitalists were protected only in so far as their use was in conformity with the calculations and interests of the political leadership, whereas in the Indian subcontinent they were guaranteed by independent political factions purchased by these capitalists and unconcerned with the productive use of the rents (Khan, 2000, 91–98; Kohli, 2004). Southeast Asian countries, including Indonesia, Malaysia, Thailand, the Philippines, and Singapore, stand somewhere in between these two forms of clientelism (Studwell, 2007). In SSA, the rent-seeking process looks more like the fragmented clientelism of the Indian subcontinent than the more centralized patronage observed in South Korea and Taiwan. In fact, most African countries seem to suffer from the disadvantages of fragmented clientelism to an even more serious extent than do India, Pakistan and Bangladesh because centrifugal tendencies born of ethno-regionalism are especially strong in a continent with weak political institutions and incipient states. Where ancient African kingdoms existed, their boundaries were not coterminous with those of the independent states that Africans inherited at the end of the colonial period. This lack of correspondence prevented the consolidation of these ancient structures into modern states. It also gave rise to severe political and social conflicts at the time of independence (Coquery-Vidrovitch, 1985, Austen, 1987, Tordoff, 1997 and Herbst, 2000, Chap. 4). That an inclusionary national development project is conspicuously lacking in most African countries follows from the above conditions of ethnic nationalism: the political elite have not fulfilled the popular expectations aroused by the nationalist leaders in the run up to independence (Fage and Tordoff, 1995). While in India, for example, the problem was not the absence of a national industrial policy but the inability of the central leadership in charge of its elaboration and implementation to discipline poor performers and reallocate resources rationally due to the political opposition of powerful excluded groups, in SSA there is typically no centrally defined industrial policy or development strategy. This deficiency is reflected in the high dependence vis-à-vis foreign aid that African countries have learned to live with. The problem of low capital accumulation is further compounded by the tendency of African elites to spend their rental incomes largely on lavish consumption rather than investing them in productive sectors with high monopoly rents or put their savings in foreign bank accounts or assets rather than at home. The spread of universal religions with a powerful God as figurehead may hold in check the forces that undermine the accumulation of productive capital in SSA. Their beneficial effects may be felt at two distinct levels. First, by nurturing feelings of loyalty and identity towards a large reference group that exceeds ethnic boundaries, they may gradually help to establish the basis for a generalized morality and a civic polity backed by pan-lineage and pan-ethnic institutions. Second, by instilling values and norms that violate customs with adverse effects on capital accumulation and entrepreneurship, they contribute to behavioral changes that encourage economic growth. In particular, they provide a formidable shelter against redistributive pressures emanating from kith and kin, and they emphasize values such as frugality, honesty, and hard work that encourage saving, risk-taking and improved contract enforcement and flexibility.35 Religion can produce those effects only in so far as adherence to its tenets is sufficiently genuine and when conversion affects the existing social structure by raising the position of people who occupied low ranks in the previous system. In many areas of West Africa, old kinship-based organizations and customs have persisted throughout the pre-colonial Islamization period because the commitment to Islam remained superficial and opportunistic. Regarding Islam, the best situation probably obtains when (i) the ideals of universal brotherhood and equality are pursued with enough commitment to undermine ethno-regional identities and redistributive norms, and (ii) sufficient flexibility is allowed to circumvent the main growth-limiting Islamic rules, particularly those concerning inheritance. In spite of what has just been said, the recent flowering of pentecostal churches and other revivalist movements born outside the ambit of established churches is not necessarily a welcome change for Africa. It might just reflect the ability of unscrupulous and cynical entrepreneurs posing as inspired preachers or prophets to exploit the gullibility of poor illiterate people who are especially vulnerable to charismatic leadership in times of prolonged economic and political crisis. Far from the ascetic morality that characterized mainline churches a few decades earlier, the new evangelists tend to be people who, by cunning and trickery, have succeeded in becoming immensely rich while deceptively promising to their followers that the same luck is soon going to befall them. Their success has much to do with their professed belief in the active presence of the Holy spirit. Indeed, for people brought up in magical universes inhabited by spirits who are represented as real individual beings and with whom some form of effective communication is possible and essential, this feature offers almost irresistible attraction (Laurent, 2003 and Ellis and Ter Haar, 2004, Chap. 3, 137).