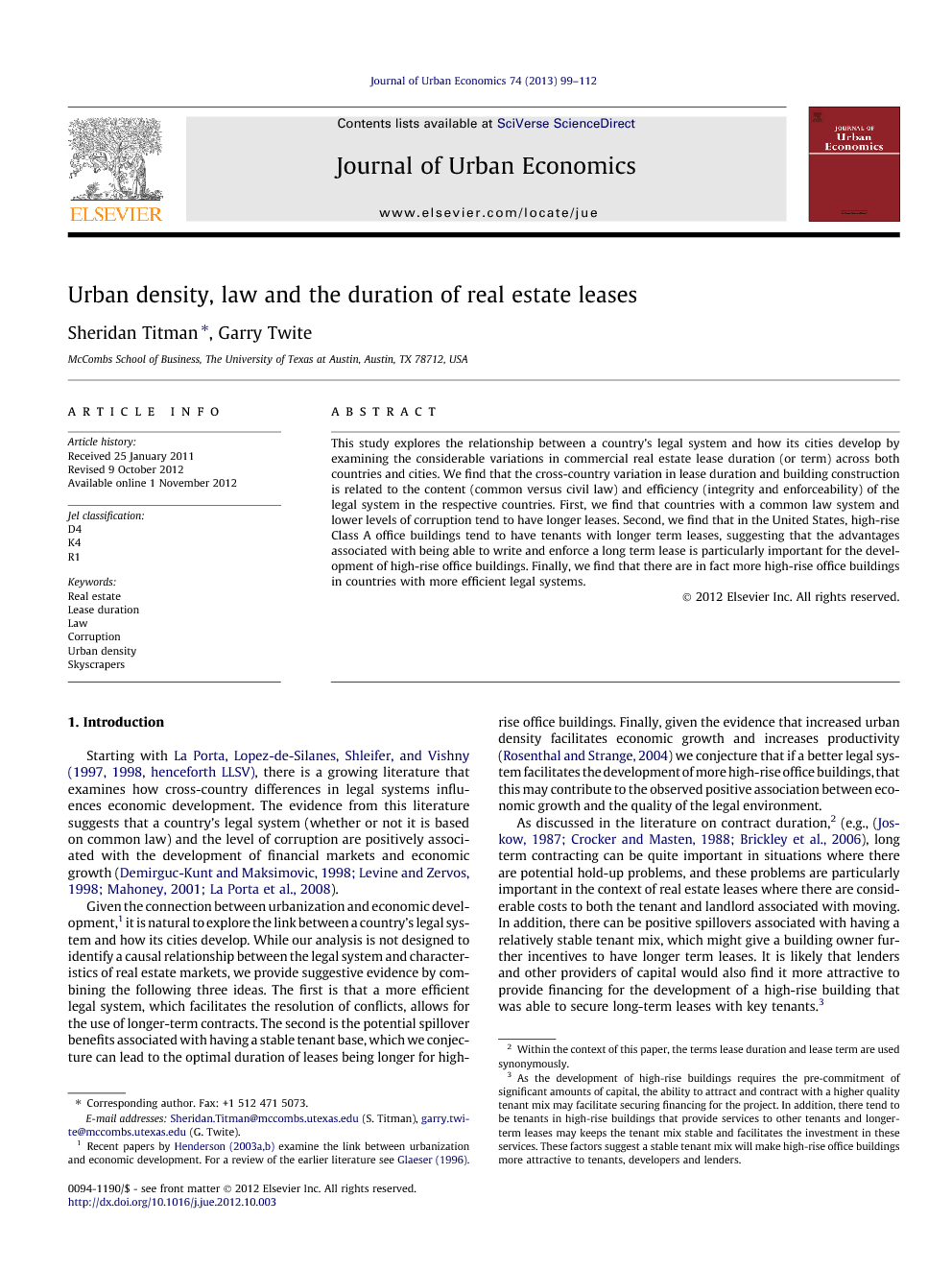 This study explores the relationship between a country’s legal system and how its cities develop by examining the considerable variations in commercial real estate lease duration (or term) across both countries and cities. We find that the cross-country variation in lease duration and building construction is related to the content (common versus civil law) and efficiency (integrity and enforceability) of the legal system in the respective countries. First, we find that countries with a common law system and lower levels of corruption tend to have longer leases. Second, we find that in the United States, high-rise Class A office buildings tend to have tenants with longer term leases, suggesting that the advantages associated with being able to write and enforce a long term lease is particularly important for the development of high-rise office buildings. Finally, we find that there are in fact more high-rise office buildings in countries with more efficient legal systems.

Starting with La Porta et al., 1997 and La Porta et al., 1998, there is a growing literature that examines how cross-country differences in legal systems influences economic development. The evidence from this literature suggests that a country’s legal system (whether or not it is based on common law) and the level of corruption are positively associated with the development of financial markets and economic growth (Demirguc-Kunt and Maksimovic, 1998, Levine and Zervos, 1998, Mahoney, 2001 and La Porta et al., 2008). Given the connection between urbanization and economic development,1 it is natural to explore the link between a country’s legal system and how its cities develop. While our analysis is not designed to identify a causal relationship between the legal system and characteristics of real estate markets, we provide suggestive evidence by combining the following three ideas. The first is that a more efficient legal system, which facilitates the resolution of conflicts, allows for the use of longer-term contracts. The second is the potential spillover benefits associated with having a stable tenant base, which we conjecture can lead to the optimal duration of leases being longer for high-rise office buildings. Finally, given the evidence that increased urban density facilitates economic growth and increases productivity (Rosenthal and Strange, 2004) we conjecture that if a better legal system facilitates the development of more high-rise office buildings, that this may contribute to the observed positive association between economic growth and the quality of the legal environment. As discussed in the literature on contract duration,2 (e.g., (Joskow, 1987, Crocker and Masten, 1988 and Brickley et al., 2006), long term contracting can be quite important in situations where there are potential hold-up problems, and these problems are particularly important in the context of real estate leases where there are considerable costs to both the tenant and landlord associated with moving. In addition, there can be positive spillovers associated with having a relatively stable tenant mix, which might give a building owner further incentives to have longer term leases. It is likely that lenders and other providers of capital would also find it more attractive to provide financing for the development of a high-rise building that was able to secure long-term leases with key tenants.3 However, long-term leases require effective mechanisms for dealing with conflicts that can arise within the term of the lease. For example, the landlord may fail to maintain the building or to provide promised services, like trash removal. The tenant may be disruptive to other tenants or take actions that hurt the value of the property. These conflicts can be resolved by simply having the tenant move out when they have a short-term lease, but may require litigation when the tenant has a long-term lease. Hence, we expect to see longer duration leases in countries with a legal system that allows for the efficient resolution of these disputes, and shorter duration leases in countries with less efficient legal systems. To explore these ideas we first examine the cross-sectional determinants of lease duration using two data sets provided by CB Richard Ellis. The first data set, which allows us to explore the importance of cross-country legal differences, provides typical lease terms in 185 cities and 57 countries around the world. Our regressions estimate the relation between the lease duration reported in this data set on measures of the content and efficiency of the legal system, economic development and the number of high-rise buildings in each city. The second data set, which we use to examine the relation between property types and lease duration, includes information on individual lease contracts on office space within the United States. Finally, using data from Skyscraper.com, we estimate the relation between the legal environment in these 57 countries and the relative number of high-rise office buildings and skyscrapers in each city, defining a high-rise building to be more than 35 m tall or more than 12 floors and a skyscraper to be more than 100 m tall or more than 30 floors. In our first set of regressions, we find a strong and robust positive relation between lease duration and a country’s legal origin. Leases in common law countries tend to be longer than leases in civil law countries. This result is consistent with the observation by Djankov et al. (2003) that tenant/landlord conflicts are more quickly resolved in common law countries. We also find that lease duration is shorter in countries that are considered to be more corrupt. In our second set of regressions, which examine data on individual U.S. office leases, we find that tenants in high-rise buildings tend to have longer-term leases. Since we expect no impediments to the utilization of long-term leases in the U.S., we interpret this regression as indicating that the advantages associated with longer-term leases are particularly important for the development of high-rise buildings. All else equal, this should make high-rise office buildings relatively more attractive to develop in countries with legal systems that allow for the efficient enforcement of the terms of a long-term lease. In our final set of regressions, we examine the association between the legal system and the number of high-rise office buildings per capita. We find that all else equal, there are more high-rise office buildings in common law countries, and countries with less corruption. This last result is consistent with our conjecture that more efficient legal systems, which facilitate the use of long-term contracts, can influence the development of cities. The paper is organized as follows. Section 2 discusses the association between the legal system, lease duration, building density and economic growth. Section 3 discusses the association between market liquidity and the duration of real estate leases. Section 4 discusses the association between the economic environment and the duration of real estate leases. Section 5 describes the sample and methodology. Section 6 presents the results and Section 7 draws some conclusions.

Office space is relatively homogeneous across countries, and thus provides an ideal experiment for analyzing the effect of the legal environment on the structure of contracts. Our analysis indicates that commercial real estate leases tend to be longer in developed economies, common law legal systems and in countries with less corruption. We also find somewhat weaker evidence that suggests that inflation and the density of the real estate market influences lease duration. The structure and efficiency of a country’s legal system can influence an economy in a number of ways, and our results are suggestive of one possible mechanism. By affecting the ability of landlords and tenants to write and enforce long-term leasing agreements, the legal system may affect both the size of the buildings that are developed. In particular, our results are consistent with the ability to write and enforce long-term contracts being especially important for taller office buildings, and perhaps because of this, we see fewer high-rise buildings and skyscrapers in countries with less efficient legal systems. While our analysis describes a clear link between the legal environment and both the structure of contracts and the development of high-rise office buildings, the direct chain of causation that we describe is somewhat speculative. An alternative possibility, which we have not ruled out, is that countries with more efficient legal systems attract firms, e.g., banks, law firms, consultants and accountants, that tend to prefer long-term leases in high rise office buildings. It is also possible that financing large real estate projects is more difficult in countries with weaker legal systems, and that this has a direct effect on urban density. Sorting through these alternative channels is likely to be a challenge, but is potentially an interesting avenue for future research. Finally, it should be noted that although the scope of this study is relatively narrow, it may have implications on the broader literature that examines the relation between the efficiency of the legal system and economic growth. Given the economic benefits associated with urban development, our finding of a positive association between a country’s legal environment and how its cities develop provides one channel by which the legal environment facilitates growth. However, it is likely that high-rise buildings are just one example of a long-term investment that promotes economic growth and is more attractive in countries with more efficient legal systems. A deeper analysis of the relation between investment horizons and the efficiency of the legal system offers an interesting avenue for future research.