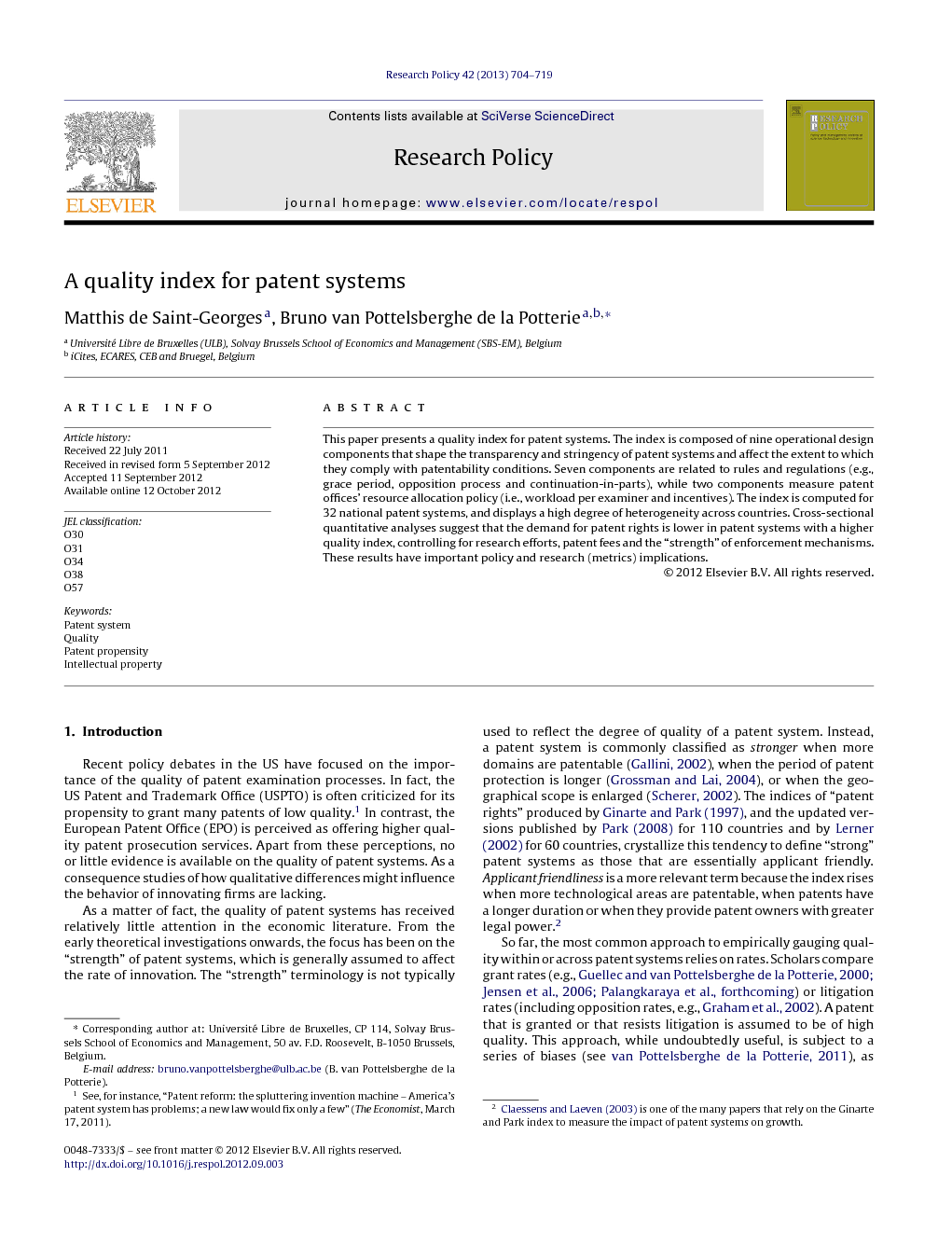 This paper presents a quality index for patent systems. The index is composed of nine operational design components that shape the transparency and stringency of patent systems and affect the extent to which they comply with patentability conditions. Seven components are related to rules and regulations (e.g., grace period, opposition process and continuation-in-parts), while two components measure patent offices’ resource allocation policy (i.e., workload per examiner and incentives). The index is computed for 32 national patent systems, and displays a high degree of heterogeneity across countries. Cross-sectional quantitative analyses suggest that the demand for patent rights is lower in patent systems with a higher quality index, controlling for research efforts, patent fees and the “strength” of enforcement mechanisms. These results have important policy and research (metrics) implications.

The objective of this paper is to create a quality index of patent systems of 32 countries and test whether quality affects the behavior of applicants. The first part of the paper is devoted to the methodology used to compute the index (components and alternative weighting schemes). Heterogeneity is observed across countries. The EPO and the patent offices of the UK and several Nordic countries have the highest-quality metrics. At the other extreme are the US and several Commonwealth countries, which have the lowest indicators of quality. The medium-high group includes many European countries (e.g., Austria, Poland, France), the major Asian economies (e.g., Japan, China, South Korea, Malaysia) and several other countries (e.g., Russia, Switzerland). The medium-low group includes, among others, Germany, Brazil, Mexico, Spain and Singapore. The US patent reform, induced by the America Invents Act of September 2011, has improved the country's quality index slightly, allowing the US to move from the low-quality group to the medium-low quality group. This is essentially due to the switch towards a first-to-file system and the adoption of a post-grant opposition process. The second part of the paper aims to investigate whether the quality of patent systems affects applicants’ filing behavior. Several quantitative models are used to test whether patent systems with a high quality index receive fewer patent applications. The results show that the higher the index, the lower the demand for patent rights (measured using four alternative indicators, including the number of claims filed, by domestic organizations and from abroad, and the number of patents filed). In other words, applicants adapt their filing behavior according to the broad quality of the patent system they target. This negative relationship between quality and the demand for patent rights is still observed when relative fees, the number of researchers and the strength of enforcement mechanisms are taken into account. Interestingly, non-resident applicants are more sensitive to quality and relative fees than resident applicants. These results should be taken with caution and need further validation, either with a larger sample of countries, more years, or an industry level approach. This being said they are robust to several variations in the model and in the dependent variable, and as such they have important implications for policy makers, patent count methodologies and further research opportunities. The policy implications are threefold. First, as several facets of patent systems and their operational design influence applicant behavior, policy makers have a clear opportunity to fine-tune the design of their patent systems to a greater extent than is commonly believed. This is especially true for non-resident applicants, which are more sensitive to these policies than resident applicants. For instance, one way to further reduce the USPTO backlog of pending applications would be to reduce the reliance on continuations in parts (CIPs) and to set up a request for examination after a search report is made public. Second, recent years have been marked by more intense collaboration among the largest patent offices in the world. This is evidenced by the increasing number of national patent offices being recognized as International Search Authorities (ISA) for PCT filings at WIPO, by the explosion in the number of PPHs bilateral agreements (Patent Prosecution Highways). Under a PPH, a patent already examined by patent office A would be treated faster by patent office B if the search and examination report are made available. These projects could be perceived as preliminary steps towards a global mutual recognition process. The significant variations in the quality index across countries, worldwide and within the EU, suggest that a mutual recognition process would lead to a smaller common quality denominator effect: applicants could first file their patents in the least stringent, most opaque office, and then extend it abroad. However, should such a legitimate attempt to evolve towards a global patent system receive further political support, the index presented in this paper – and especially its nine components – would serve as a useful basis for considering preliminary convergence mechanisms. Third, the results presented in this paper suggest that patent count metrics based on priority applications in several national patent offices are subject to a potential bias. Indeed, patent office A might receive more applications than patent office B because the former has a lower quality index. In such situations, count differences would not automatically reflect differences in innovation performance. Finally, in our eyes the present paper paves the way to at least two interesting research opportunities. A first one is to tackle the Lemley vs. Jefferson controversy described by van Pottelsberghe de la Potterie (2011). Thomas Jefferson, the former president of the US, claimed that the government should restraint their propensity to grant monopolistic rights, because the latter have perverse effects. On the other hand, Lemley (2001) raised the “rational ignorance” concept, whereby patent offices should not devote resources to assess patents that would never be used. The quality index of patent systems shows an opposite effect than the patent strength index (also called patent rights) of Ginarte and Park (1997), which is essentially a patent friendliness index. The latter index has been used extensively in the literature to assess the economic impact of patent systems. One might, therefore, wonder whether a patent system with a higher quality index is more favorable to innovation and economic growth. Clearly, an extremely stringent system that would lead to the granting of, for example, only ten patents per year is unlikely to stimulate more innovation. However, the reverse is also true – the automatic granting of all patent applications would lead to a massive hold-up phenomenon, in which companies would allocate more resource to filing patents than to innovation. This is undoubtedly an interesting question for future research. A second field of research would be to improve the ‘output’ measures of examination stringency. The various sources of bias in these metrics (grant rates, litigation rates, opposition rates), briefly listed in the present paper, could be taken into account in order to have more reliable ‘stringency’ measures of patent systems.