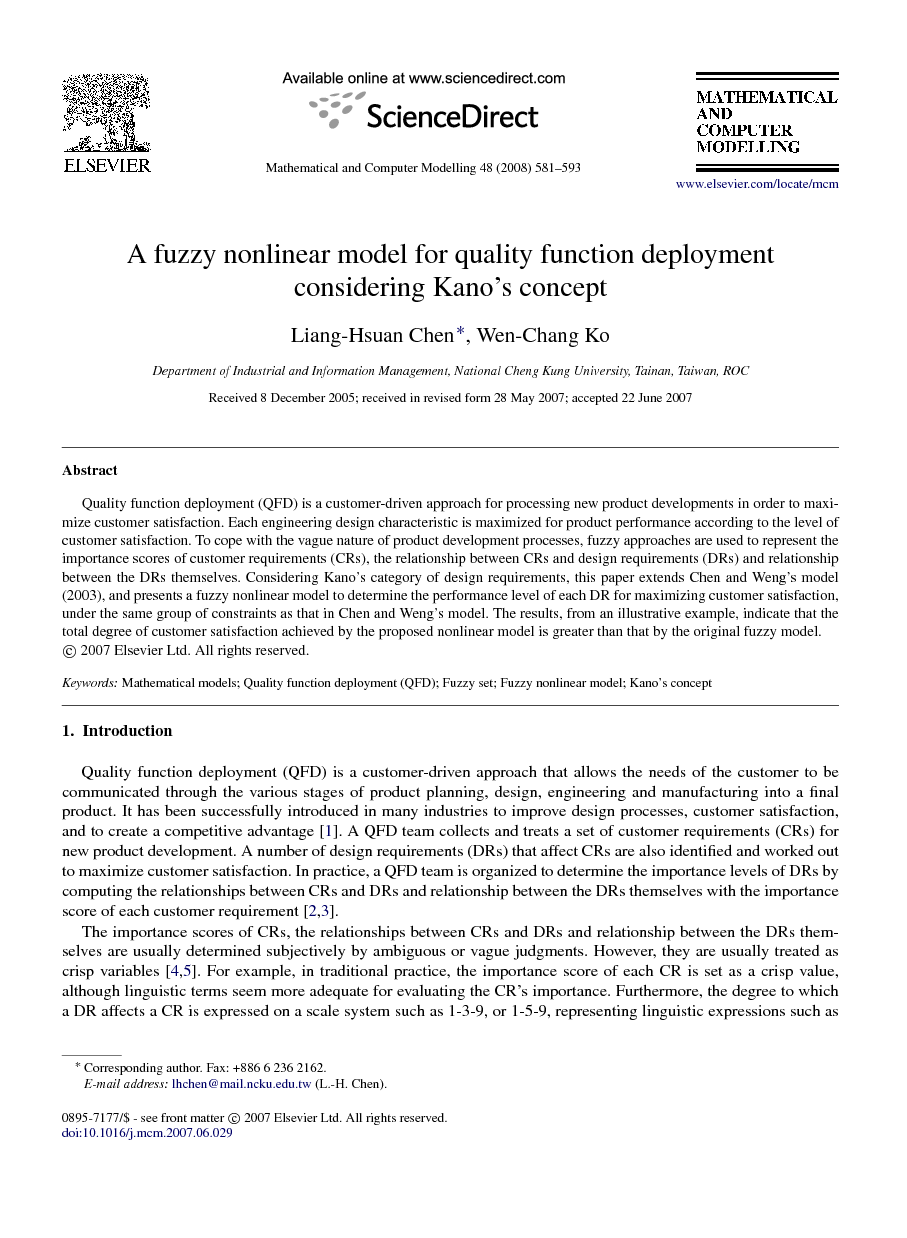 Quality function deployment (QFD) is a customer-driven approach for processing new product developments in order to maximize customer satisfaction. Each engineering design characteristic is maximized for product performance according to the level of customer satisfaction. To cope with the vague nature of product development processes, fuzzy approaches are used to represent the importance scores of customer requirements (CRs), the relationship between CRs and design requirements (DRs) and relationship between the DRs themselves. Considering Kano’s category of design requirements, this paper extends Chen and Weng’s model (2003), and presents a fuzzy nonlinear model to determine the performance level of each DR for maximizing customer satisfaction, under the same group of constraints as that in Chen and Weng’s model. The results, from an illustrative example, indicate that the total degree of customer satisfaction achieved by the proposed nonlinear model is greater than that by the original fuzzy model.

Quality function deployment (QFD) is a customer-driven approach that allows the needs of the customer to be communicated through the various stages of product planning, design, engineering and manufacturing into a final product. It has been successfully introduced in many industries to improve design processes, customer satisfaction, and to create a competitive advantage [1]. A QFD team collects and treats a set of customer requirements (CRs) for new product development. A number of design requirements (DRs) that affect CRs are also identified and worked out to maximize customer satisfaction. In practice, a QFD team is organized to determine the importance levels of DRs by computing the relationships between CRs and DRs and relationship between the DRs themselves with the importance score of each customer requirement [2] and [3]. The importance scores of CRs, the relationships between CRs and DRs and relationship between the DRs themselves are usually determined subjectively by ambiguous or vague judgments. However, they are usually treated as crisp variables [4] and [5]. For example, in traditional practice, the importance score of each CR is set as a crisp value, although linguistic terms seem more adequate for evaluating the CR’s importance. Furthermore, the degree to which a DR affects a CR is expressed on a scale system such as 1-3-9, or 1-5-9, representing linguistic expressions such as “weak”, “moderate”, and “strong”. However, design engineers usually do not have sufficient knowledge and information about the influence of engineering responses on CRs, due to the lack of information or language hedge from the customer [6]. These considerations have made the applications of fuzzy approaches significant in addressing diversified and imprecise problems in the importance score of each CR and the relationships between CRs and DRs and relationship between the DRs themselves. In applying fuzzy approaches, several studies [7], [8], [9], [10] and [11] have attempted to deal with the vague nature of linguistic terms by using fuzzy numbers to express the importance score of CRs. Chen and Weng [6] proposed a fuzzy linear programming model to determine the optimal fulfilment degree of each DR at each αα-cut for achieving the optimal customer satisfaction. Wang [5] presented a fuzzy outranking approach to model the imprecise preference relationships between DRs to achieve customer satisfaction and balanced product design. Temponi et al. [12] developed a fuzzy logic-based extension to QFD for capturing vague requirements. Some models have also been formulated for determining the levels of CRs or DRs based on fuzzy sets theory [8], [13], [14], [15] and [16]. However, these existing studies still suffer from drawbacks in approaches and methodologies, as mentioned by Chen and Weng [6]. In practice, effective design leads to the achievement of maximum customer satisfaction. DRs are able to achieve better design effectiveness when their performance is highly correlated with customer satisfaction. However, the performance of DRs is not necessarily proportionally consistent with customer satisfaction. Kano et al. [17] proposed that quality performance of a product or service has three different relationships with customer satisfaction. Some researchers have incorporated Kano’s idea into QFD for assigning weights to different CRs to explain how CRs impact customer satisfaction in different ways [1], [2], [18], [19] and [20]. Unlike the existing literature, in this study we apply Kano’s concept to classify DRs into three categories based on their importance to customer satisfaction, since the performance of various DRs achieve different levels of customer satisfaction. This approach is mainly used to extend the fuzzy linear QFD model in Chen and Weng’s study [6], and a fuzzy nonlinear mathematical programming model is constructed to increase customer satisfaction under the same conditions, such as budget limitations, market competition and technical difficulty constraints. An example of a semiconductor packing case is given to illustrate the proposed model. In the following section, the fuzzy linear model is introduced. In Section 3, a fuzzy nonlinear model is developed to figure out the performance degrees of DRs that produce maximum customer satisfaction. The way in which DRs are categorized into three classes based on the Kano’s concept is also described. An example is presented to illustrate our approach in Section 4. Finally, the concluding remarks are provided in Section 5.