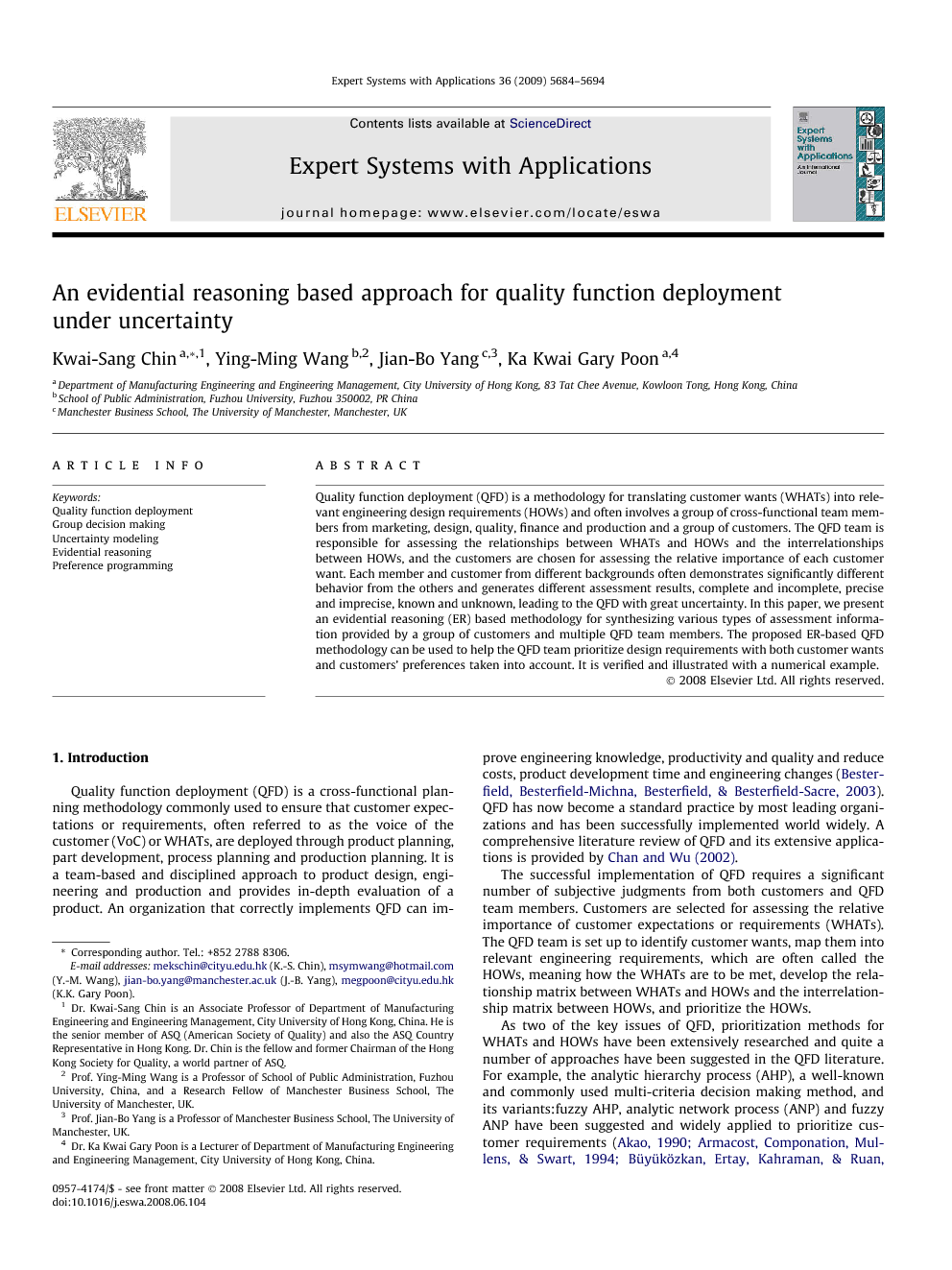 Quality function deployment (QFD) is a methodology for translating customer wants (WHATs) into relevant engineering design requirements (HOWs) and often involves a group of cross-functional team members from marketing, design, quality, finance and production and a group of customers. The QFD team is responsible for assessing the relationships between WHATs and HOWs and the interrelationships between HOWs, and the customers are chosen for assessing the relative importance of each customer want. Each member and customer from different backgrounds often demonstrates significantly different behavior from the others and generates different assessment results, complete and incomplete, precise and imprecise, known and unknown, leading to the QFD with great uncertainty. In this paper, we present an evidential reasoning (ER) based methodology for synthesizing various types of assessment information provided by a group of customers and multiple QFD team members. The proposed ER-based QFD methodology can be used to help the QFD team prioritize design requirements with both customer wants and customers’ preferences taken into account. It is verified and illustrated with a numerical example.

Uncertainty is inherent in human being’ subjective judgments and needs to be taken into account properly in human decision making. In this paper, we developed an ER-based QFD methodology for dealing with various types of uncertainties such as incomplete, imprecise and missing information that may occur in the implementation process of QFD. The proposed methodology allows customers and QFD team members to express their opinions using a unified belief structure independently, can accommodate judgments that may be complete or incomplete, precise or imprecise like intervals, and can also handle situations where customers and QFD team members do not provide any assessment information either because they feel difficult to make proper judgment or simply do not want to make any judgment due to whatever reasons they may have. This provides desirable flexibility for customers and QFD team members to make their true judgments and freely express their opinions yet still within a rigorous and systematic framework. A numerical example was also examined to illustrate the implementation process of the ER-based QFD methodology. It is shown that uncertainties associated with incompleteness, imprecision or ignorance can all be well modeled using the belief structures. The interval ER algorithm provides a rigorous, reliable and systematic way to aggregate multiple belief structures. Perhaps, a drawback to use the ER-based QFD methodology is its complexity. However, such a drawback can be overcome when the interval ER algorithm is implemented recursively on a Microsoft Excel worksheet.