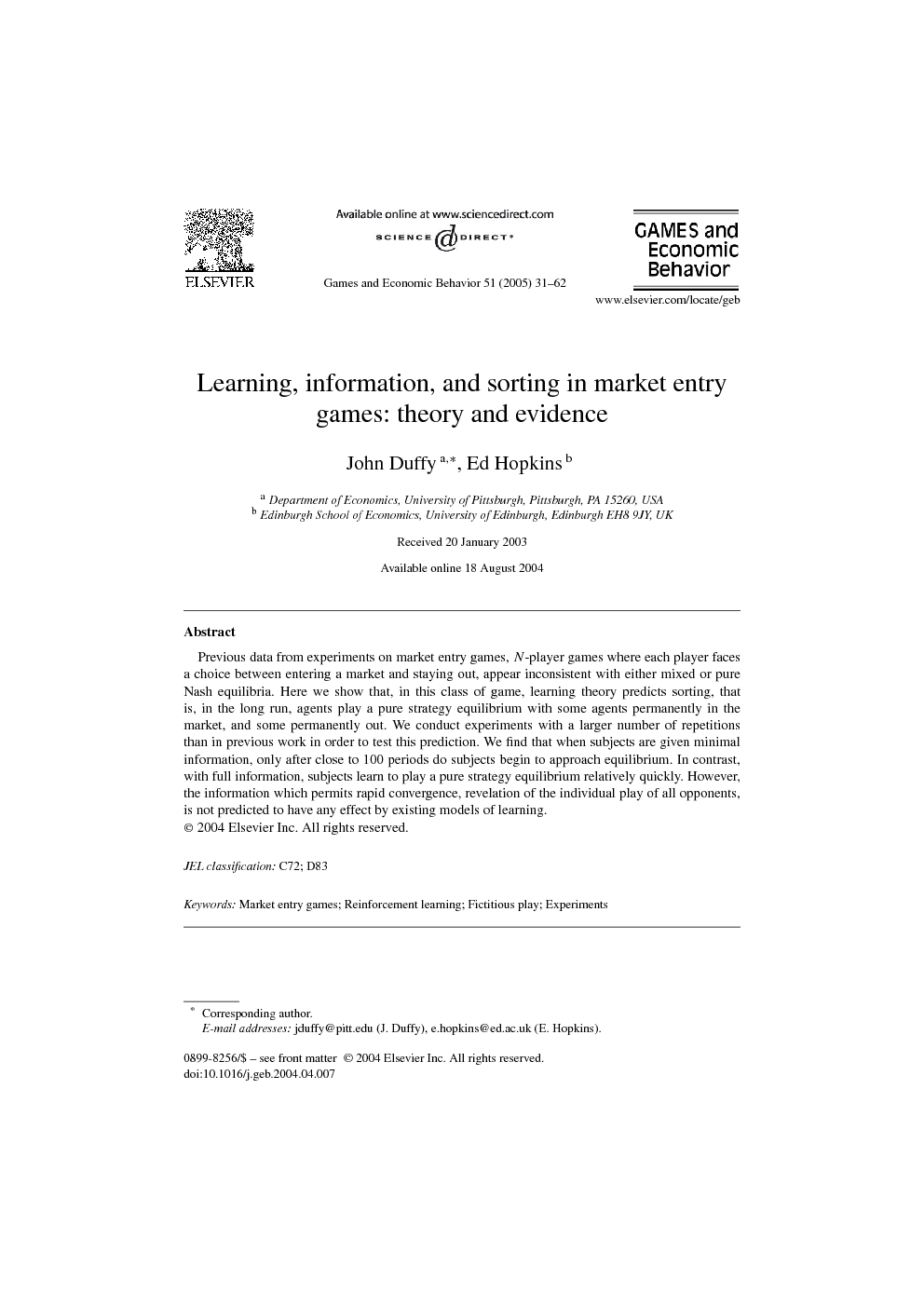 Previous data from experiments on market entry games, N-player games where each player faces a choice between entering a market and staying out, appear inconsistent with either mixed or pure Nash equilibria. Here we show that, in this class of game, learning theory predicts sorting, that is, in the long run, agents play a pure strategy equilibrium with some agents permanently in the market, and some permanently out. We conduct experiments with a larger number of repetitions than in previous work in order to test this prediction. We find that when subjects are given minimal information, only after close to 100 periods do subjects begin to approach equilibrium. In contrast, with full information, subjects learn to play a pure strategy equilibrium relatively quickly. However, the information which permits rapid convergence, revelation of the individual play of all opponents, is not predicted to have any effect by existing models of learning.

We have derived new results on learning behavior in market entry games and have carried out an experiment to test our predictions. The theoretical predictions appear to have some support. In most sessions, toward the end of 100 rounds, play was at or close to the pure equilibrium outcome predicted by the reinforcement and fictitious play learning models. These findings suggest that it may take a substantial number of repetitions before the play of experimental subjects in market entry games (and possibly other games as well) approaches the asymptotic predictions of learning models. Consequently, caution appears called for in using asymptotic results for learning models to predict or characterize behavior in economic decision-making experiments, which are typically conducted for relatively shorter lengths of time.Our experimental design also enabled us to investigate subjects’ use of information. Our main conclusion here is that individuals are adaptable in ways that are not captured by current learning models. When individuals possess the minimal amount of information assumed by reinforcement learning models, as in our limited information treatment, such that they do not even know that they are playing a game, they are still capable of learning equilibrium behavior. However, reinforcement learning does not capture the change in behavior that occurs when more information is provided. Similarly, belief based learning models, such as fictitious play, do not capture the qualitative difference in play between our aggregate and full information treatments. One possible explanation for the differences we observe is that individuals are using repeated game (dynamic) strategies that are not captured by the learning models considered. The most common class of repeated game strategies are collusive strategies that permit players to gain greater payoffs than they would in a static equilibrium. There is no evidence for that type of behavior here. We are left to speculate what other objectives the subjects might have had, and what dynamic strategies, out of an infinite class, might have been employed. Identification of these different alternatives is not easy. A second possibility, in line with the work of Camerer et al. (2002), is that certain “sophisticated” players are using the repeated nature of the game and the information about individual actions that is available in the full information treatment to teach other, less sophisticated agents how to play (e.g. to stay out). We found only weak evidence in support of this teaching hypothesis, but perhaps that is because we do not examine strategic behavior across a variety of different repeated games as Camerer et al. (2002) do In any case, no single learning model appears to capture the behavior observed across our three experimental treatments. We hope that our analysis has shed some light on the shortcomings of existing learning models, and spurs other researchers to provide further improvements.