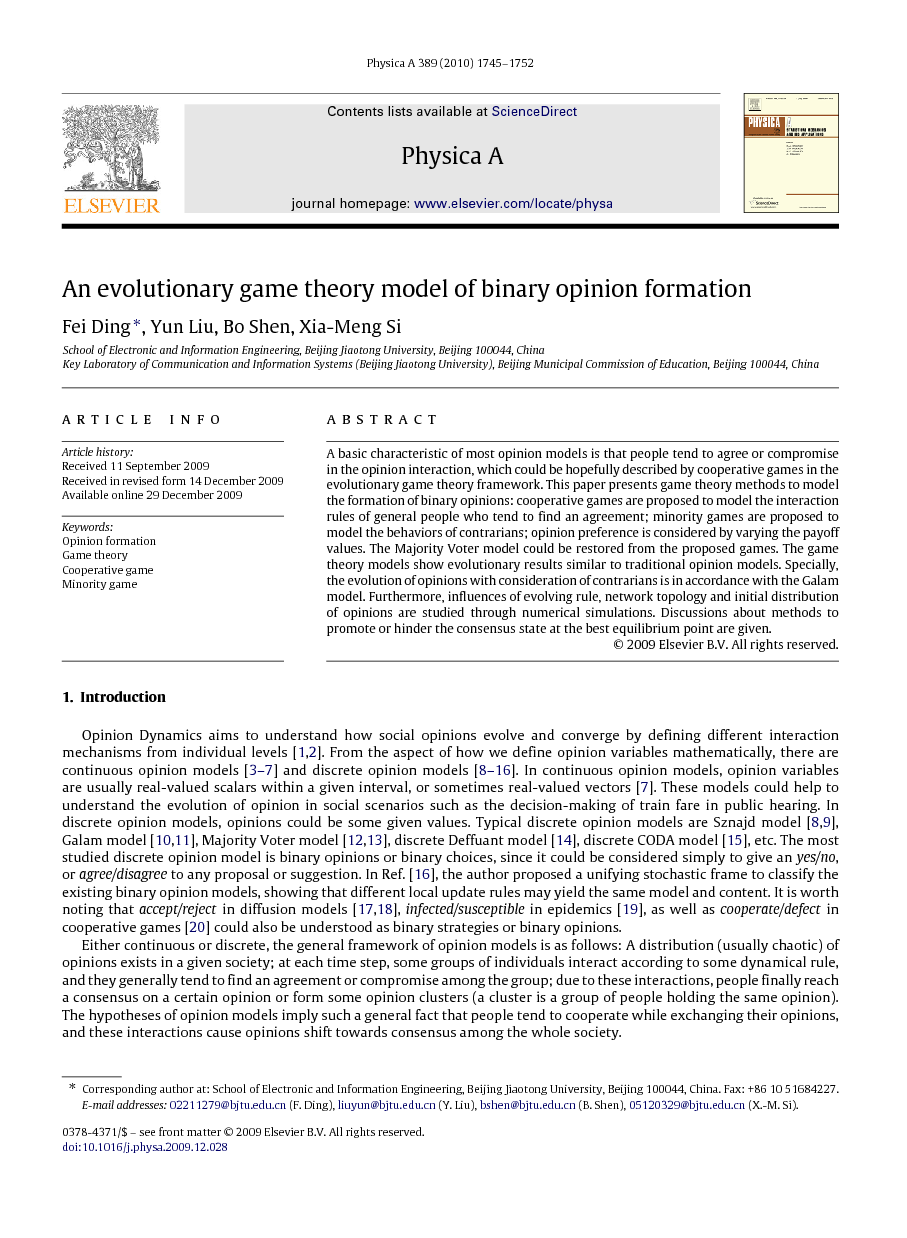 A basic characteristic of most opinion models is that people tend to agree or compromise in the opinion interaction, which could be hopefully described by cooperative games in the evolutionary game theory framework. This paper presents game theory methods to model the formation of binary opinions: cooperative games are proposed to model the interaction rules of general people who tend to find an agreement; minority games are proposed to model the behaviors of contrarians; opinion preference is considered by varying the payoff values. The Majority Voter model could be restored from the proposed games. The game theory models show evolutionary results similar to traditional opinion models. Specially, the evolution of opinions with consideration of contrarians is in accordance with the Galam model. Furthermore, influences of evolving rule, network topology and initial distribution of opinions are studied through numerical simulations. Discussions about methods to promote or hinder the consensus state at the best equilibrium point are given.

Opinion Dynamics aims to understand how social opinions evolve and converge by defining different interaction mechanisms from individual levels [1] and [2]. From the aspect of how we define opinion variables mathematically, there are continuous opinion models [3], [4], [5], [6] and [7] and discrete opinion models [8], [9], [10], [11], [12], [13], [14], [15] and [16]. In continuous opinion models, opinion variables are usually real-valued scalars within a given interval, or sometimes real-valued vectors [7]. These models could help to understand the evolution of opinion in social scenarios such as the decision-making of train fare in public hearing. In discrete opinion models, opinions could be some given values. Typical discrete opinion models are Sznajd model [8] and [9], Galam model [10] and [11], Majority Voter model [12] and [13], discrete Deffuant model [14], discrete CODA model [15], etc. The most studied discrete opinion model is binary opinions or binary choices, since it could be considered simply to give an yes/no, or agree/disagree to any proposal or suggestion. In Ref. [16], the author proposed a unifying stochastic frame to classify the existing binary opinion models, showing that different local update rules may yield the same model and content. It is worth noting that accept/reject in diffusion models [17] and [18], infected/susceptible in epidemics [19], as well as cooperate/defect in cooperative games [20] could also be understood as binary strategies or binary opinions. Either continuous or discrete, the general framework of opinion models is as follows: A distribution (usually chaotic) of opinions exists in a given society; at each time step, some groups of individuals interact according to some dynamical rule, and they generally tend to find an agreement or compromise among the group; due to these interactions, people finally reach a consensus on a certain opinion or form some opinion clusters (a cluster is a group of people holding the same opinion). The hypotheses of opinion models imply such a general fact that people tend to cooperate while exchanging their opinions, and these interactions cause opinions shift towards consensus among the whole society. Cooperation is abundant in nature ranging from microbial interactions to human behaviors. The evolution of cooperation has long been a hot research topic in Biology, Economics, and Sociology [21], [22] and [23]. Game theory and evolutionary game theory [22], [23] and [24] are important tools in the study of cooperation. Researches are devoted to model various cooperative phenomenons [20], [22] and [23], explain emergence and evolution of cooperation [21] and [25], and explore methods to promote cooperation [26] and [27]. In Ref. [28], the authors used methods from statistical physics to discuss the evolution of cooperation in the prisoner’s dilemma, showing that there are intriguing interdisciplinary links between evolution game theory and physics. In this paper, we aim to adopt methods from evolutionary game theory to model opinion formation, and show interesting relations between binary opinion models and cooperative games. Previous researches have witnessed some attempts to model the opinion formation using game theory methods. In Ref. [29], the authors modeled the interactions between individuals with one-shot games, with interaction strategies to be keep one’s own opinion, agree with the other’s opinion, and take a compromise opinion. They successfully obtained the famous Deffuant model [3] and [4]. On the basis of their work, we took consideration of a new ‘not participate’ strategy, and put the one-shot game into the evolutionary game theory framework [30]. Abundant dynamical regimes were obtained when we also considered strategy noise and preference. These works are within the framework of continuous Bounded Confidence model [5]. However, we find in these models that the confidence bound is very hard to explain. Besides, the definitions of interaction strategies and their payoffs are complex. In Ref. [31], the authors model the opinion interaction with a battle-of-the-sex game. According to their study, people would finally reach a consensus in the majority opinion or fall into fractions of co-existing opinions. In this paper, we model the opinion interaction more concisely using cooperative games and minority games. By setting the payoff values differently, opinion preference could be well simulated. We would also show how to obtain the Majority Voter model from the proposed model, and some dynamical results about how to influence the winning probability of the opinion with preference. The paper is organized as follows. In Section 2, we propose some games to model binary opinion formation. Section 3 is devoted to discussions about evolutionary characteristics and implications of the model. In Section 4, we use numerical simulations to show influence factors of the best equilibrium state. Finally, we draw our conclusions in Section 5.

In this paper, we model the interaction rule in binary opinion formation using evolutionary game theory method. Specifically, we use cooperative games to model opinion interactions between people, which reflect a general fact that people tend to reach an agreement during mutual discussions. We also use minority games to model the interaction rules of contrarians. By varying payoff values and evolving rules, opinion preference and noise in opinion adoption could be considered. We also restore the Majority Voter model from the proposed games. We study the influences of contrarians, interaction network topology, initial distribution of opinions, and evolving rules to the winning probability of the opinion with preference, through game theory analysis and numerical simulations. Our results show that heterogeneity in the network topology, noise in the strategy adoption, decrease in the preference value, and decrease in the initial adoption rate of the preferred opinion would weaken the trend that the system shifts to the best equilibrium state with all agents holding the preferred opinion. When contrarians are not sufficient to dominate the evolution, emergence of contrarians would help the preferred opinion to win, but would also reduce satisfaction of the group. When contrarians are dominating the evolution, the system would switch between the two opinions. If the opinion preference is big enough, even the opinion that is less adopted in the initiation would win; a phase transition is observed in the winning probability of the preferred opinion. Our study indicates some social facts: if some opinion is preferred by the whole population, the consensus on the opinion is the best choice; the more the opinion is preferred, or the more the opinion is adopted initially in the society, the more chance that the opinion would win; if people are not good at choosing their best strategies, or they are quite different in communication abilities, the chance for the preferred opinion to win would go down; the influence of contrarians is two sided: a small amount of contrarians would bring extra time for people to evaluate between the two opinions, and help them to make better choices; but too much contrarians would confuse people, so that they could not reach an agreement in the society. Our work shows that we could use game theory method to model the opinion formation, and to restore basic characteristics of traditional opinion models, such as cooperation and defection. As extensions of the proposed model, we could take more interaction characteristics into consideration by varying payoff values or evolving rules. Besides, we could obtain more dynamical results by considering individual or group heterogeneity. In addition, we believe that more methods and results from game theory, evolutionary game theory, especially those concerning cooperative game and the promotion of cooperation should be used to study opinion formation, and the promotion of global convergence on opinion.