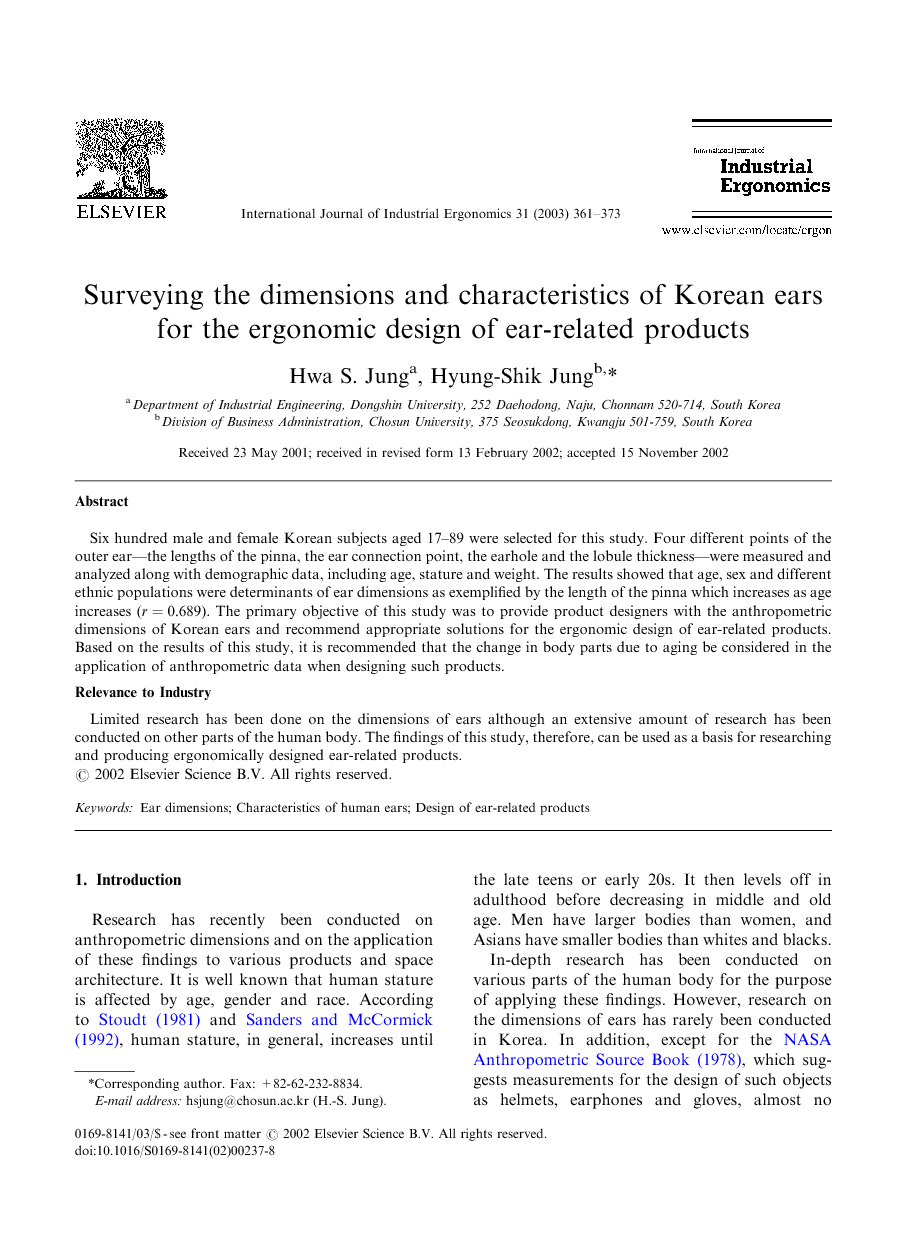 Six hundred male and female Korean subjects aged 17–89 were selected for this study. Four different points of the outer ear—the lengths of the pinna, the ear connection point, the earhole and the lobule thickness—were measured and analyzed along with demographic data, including age, stature and weight. The results showed that age, sex and different ethnic populations were determinants of ear dimensions as exemplified by the length of the pinna which increases as age increases (r=0.689). The primary objective of this study was to provide product designers with the anthropometric dimensions of Korean ears and recommend appropriate solutions for the ergonomic design of ear-related products. Based on the results of this study, it is recommended that the change in body parts due to aging be considered in the application of anthropometric data when designing such products. Relevance to Industry Limited research has been done on the dimensions of ears although an extensive amount of research has been conducted on other parts of the human body. The findings of this study, therefore, can be used as a basis for researching and producing ergonomically designed ear-related products

Research has recently been conducted on anthropometric dimensions and on the application of these findings to various products and space architecture. It is well known that human stature is affected by age, gender and race. According to Stoudt (1981) and Sanders and McCormick (1992), human stature, in general, increases until the late teens or early 20s. It then levels off in adulthood before decreasing in middle and old age. Men have larger bodies than women, and Asians have smaller bodies than whites and blacks. In-depth research has been conducted on various parts of the human body for the purpose of applying these findings. However, research on the dimensions of ears has rarely been conducted in Korea. In addition, except for the NASA Anthropometric Source Book (1978), which suggests measurements for the design of such objects as helmets, earphones and gloves, almost no literature can be found on the subject. It is reported that ears, like hair and nails, are a unique part of the human body in that they continue to grow throughout life (Sanders and McCormick, 1992). The reason is that the pinna, which is made of cartilage, extends as the cartilage hardens with age (Heathcote, 1995). If ear dimensions increase continuously as reported, this aspect should be considered in the ergonomic design of ear-related products. According to Sanders and McCormick (1992), the ear is divided into three anatomic parts: the outer, middle and inner ear. The outer ear which plays the very important role of collecting and delivering sound energy, is comprised of the pinna, the auditory canal and the eardrum. The pinna is made of cartilage and collects sound waves in the air. It can be divided into the 9 parts shown in Fig. 1. The auditory canal, a bayonet-shaped tube extending from the pinna measuring approximately 2.5 cm in length, is connected to the inner part of the ear (Crouch and McClintic, 1971). According to Tolleth (1978), an otoplasty expert, the thin outer ear along the rim of the pinna of a normal adult has a length of 6.5–7.5 cm with the width of the ear being approximately 50–60% of its length. In addition, the top of the ear is on the same level with the eyebrows, and the bottom is slightly lower than the nose or the bottom part of the nose. The ear is tilted backward at an angle of 20°. The ear dimensions in this study refer to those of the outer ear in terms of the length of the pinna parts and the thickness of the lobule. The dimensions of the auditory canal or the eardrum are not included. The purpose of this study was threefold. The primary purpose was to establish an empirical research database for the ear dimensions of Koreans of different ages and genders. The second purpose was to suggest optimal dimensions and shapes for the ear-related products. For these purposes, we measured the ear dimensions of various subjects of different ages and genders and quantitatively analyzed this relationship to other dimensions such as height and weight. The third purpose was to apply ergonomics to ear-related products. For this step, we compared and analyzed the dimensions and shapes of current models of ear-related products on the market. Through shape classification, we analyzed the shape-related problems using a qualitative method and discussed the ergonomic solutions to these problems. This study also explored the differences between the ears of Koreans and Westerners, and the difference in the dimensions of right and left ears.

Recently, a vast amount of research has been done on the measurements of various parts of the human body. There has been little research, however, on the dimensions of ears. The present study was done using 600 Koreans based on the theory that ears grow throughout one's lifetime, whereas all the other parts of the human body stop growing in one's early 20s. The dimensions of ears in different gender/age stratifications were measured and their relation to age, weight and height was studied through statistical analyses. Based on the data collected, current ear-related products in Korea were evaluated for their ergonomic fitness in terms of design. Ideal dimensions were suggested for the evaluated products for each age group of customers. The findings of the study are summarized below: 1. The dimensions of ears are significantly related to age, weight and height, but more particularly to the age than weight and height. 2. While males have bigger ears than females, the dimensions of ears grow with age in both genders. Males have a higher correlation between age and ear dimensions than females. 3. A paired-samples t-test used to find the difference between the left and right ears showed that only the length of the pinna is significantly different. 4. Ear-related products designed for the shape of Disposition Nature and Bone Nature need to be made bigger and wider than those for the shape of Nutrition Nature. 5. In comparison, Korean males have bigger ears than western males, whereas Korean females have smaller ears than their western counterparts. 6. In applying the results to ear-related products, the following are suggested: ◦ Headphones and earmuffs used as industrial safety devices should be 1 cm bigger than the current models with the length of the pinna applied to a percentile of 95. ◦ Ear-cup earphones should be made in small, medium and large sizes, applying a percentile of 95 to the ages of 10–20, 30–40 and 50–60 for each dimension. ◦ In the case of earphones, the length of the earhole should be applied to a percentile of 75, and an oval shape would be best to prevent slippage. ◦ When designing earring pins, a percentile of 95 in relation to the thickness of the lobule should be applied with a pin no more than 0.2 cm thick. A comparison between the ideal dimensions and those of current models shows that most current products need to be designed more ergonomically as shown in this study. The most salient finding of this study is that the ear of the consumer population varies according to its age stratification. In order to apply this aspect to product design, therefore, it is necessary to conduct a market survey on the ages of the target consumer group. This kind of survey will contribute to selecting a prospective consumer population more accurately. The biggest procedural challenge of this study was striving for accuracy since the information about height and weight given by the participants might not have been exact. The reliability for the data of those over 60 in particular is questionable because either they had not measured their height or weight or they could not remember their exact measurements. In addition, since only two people judged the classification of ears in the current study, there may be certain errors of classification. Although 100 people voluntarily participated in the measuring of both ears, only one ear was measured for the rest of the sample population, suggestors other limitations to this study; some people were reluctant to have both ears measured because one had certain minor defects. For those participants, we measured only the ear without defects. These limitations should be overcome in any future research. Further studies also need to explore the relationship between face and ear dimensions through a correlation analysis, product design with adaptation to the length and the angle of ear protrusion, and the effect of the location of ears and eyes, for example, close-set, wide-set, on wearing glasses. The purpose of the current study was to discover whether ear dimensions grow with age. Although the theory existed, it was difficult to find useful statistical research studies on the subject. This study supported the theory, which had been based common sense but not substantiated by empirical studies, that the dimensions of ears grow with age. Our findings—ears grow with age as the cartilage of the pinna becomes hard—were also confirmed by reviewing related literature and consulting ear, nose and throat specialists. The findings of this study, therefore, can be used as a basis for researching and producing ergonomically designed ear-related products.