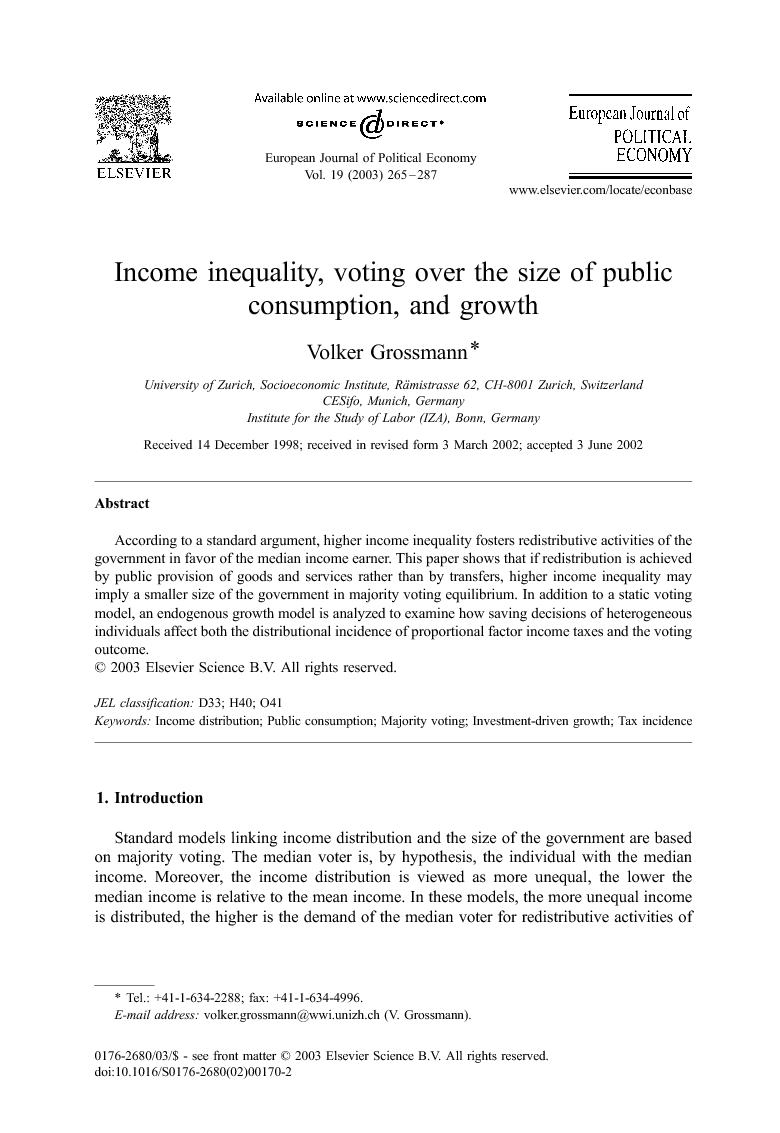 According to a standard argument, higher income inequality fosters redistributive activities of the government in favor of the median income earner. This paper shows that if redistribution is achieved by public provision of goods and services rather than by transfers, higher income inequality may imply a smaller size of the government in majority voting equilibrium. In addition to a static voting model, an endogenous growth model is analyzed to examine how saving decisions of heterogeneous individuals affect both the distributional incidence of proportional factor income taxes and the voting outcome.

Standard models linking income distribution and the size of the government are based on majority voting. The median voter is, by hypothesis, the individual with the median income. Moreover, the income distribution is viewed as more unequal, the lower the median income is relative to the mean income. In these models, the more unequal income is distributed, the higher is the demand of the median voter for redistributive activities of the government (e.g., Meltzer and Richard, 1981).1 This argument has also been applied to explain the often observed negative relationship between income inequality and economic growth.2 Since redistribution is financed by taxes that distort saving decisions, higher inequality slows down investment-driven growth through the politico-economic channel (e.g., Bertola, 1993, Persson and Tabellini, 1994 and Alesina and Rodrik, 1994). The empirical evidence for these suggestions is, however, at best, mixed.3 This paper examines the link between income inequality and the size of government in a majority voting equilibrium by considering tax-financed redistribution through publicly provided goods and services rather than transfer policies.4 Examples include recreational facilities, parks, roads, health, and cultural services. It should be noted that like tax transfer schemes, this kind of public expenditure usually has a redistributive impact on the median income earner. This is because tax payments (which are used to finance publicly provided goods) rise with income, but the median income earner does not necessarily consume less of publicly provided goods and services than richer individuals.5 More specifically, I investigate whether public consumption spending as share of national income rises or falls with income inequality. This is done in both a simple static model and also in a dynamic general equilibrium model with investment-driven growth. The intertemporal model allows an analysis of how taxation affects the voting outcome through savings, when individuals differ in capital endowments. This is the main focus of this paper. As it turns out, one cannot generally expect a positive relationship between income inequality and the public consumption share in a majority voting equilibrium. For instance, assuming exogenous labor supply and specifying the tax scheme as synthetic income tax (various tax schemes are considered), higher inequality of capital endowments unambiguously leads to lower taxation and public expenditure, respectively. The reason for this is the following. As is usual in models with infinite planning horizons and perfect credit markets, higher capital income taxation leads owners of capital to reduce savings, leaving the impact on their consumption levels ambiguous. In turn, lower savings slow down investment-driven growth, negatively affecting growth rates of both income and consumption of all individuals similarly (as usual in steady state equilibrium). In contrast, higher labor income taxation unambiguously reduces consumption levels of owners of labor but does not affect savings and growth. Thus, an increase in the public consumption share hurts capital-poor individuals more than capital-rich ones under a synthetic income tax. Finally, it is shown that allowing for endogenous labor supply may lead to an additional shift of the relative tax burden towards capital-poor individuals. Analogously to the just described “savings effect”, this is the case when capital-rich individuals can also better cope with labor income taxation by adjusting leisure upward. Fig. 1 shows that in a cross-section of OECD countries, the Gini coefficient of gross income (as measure of inequality) and public consumption expenditure as share of GDP are indeed negatively, rather than positively, related. In addition, Clarke (1995) finds, if anything, a negative (although not very robust) relationship between inequality and the public consumption share, using a broader set of countries. Moreover, many studies suggest a weak empirical link between income inequality indicators and various tax rates (e.g., Perotti, 1996 and Figini, 1999). In an alternative class of models, Bénabou, 1996 and Bénabou, 2000 and Saint-Paul (2001) show that capital market imperfections (e.g., borrowing constraints to finance higher education) lead to majority voting equilibria where redistribution and inequality may indeed be negatively related. It should be noted that the majority voting approach in this paper is not chosen because it is the best way to represent actual political processes, but in order to show that standard results about the relationship between inequality and the size of the government can be overturned. Analyzing a representative democracy model rather than a median voter model, Peltzman (1980) has derived the result that redistribution can rise when income is distributed more equally. Moreover, whether or not one believes that actual political outcomes can be understood by median voter models, it is interesting to examine the determinants of individually preferred policies (without necessarily drawing conclusions for voting equilibria). The results of this paper may also be compared with the literature on the relationship between inequality and the private provision of public goods. As pointed out by Sandler (1997), the “technology of public good aggregation” determines whether this relationship is positive or negative.6 Related work also includes the median voter growth model of Fiaschi (1999), in which government spending is productive (see also Alesina and Rodrik, 1994). That is, in Fiaschi's model, public investments enter the production function of a representative firm, whereas in my model the level of public consumption enters the utility functions of agents. Moreover, Fiaschi (1999) argues that the level of taxation need not be negatively related to growth, whereas I show that inequality need not be positively related to government spending. Section 2 sets up a simple static median voter model and examines the link between the income distribution and the public consumption share. Section 3 proposes a growth model which is, in some sense, comparable with the static model of Section 2. The equilibrium growth rate is derived in Section 4. Section 5 identifies the additional effects on the individual demand for public consumption compared with the static case. Section 6 derives the voting equilibrium. In Section 7, both the assumptions and the contribution of the model are discussed; the analysis is also extended by allowing for endogenous labor supply. Section 8 concludes.

Higher income inequality is often proposed to foster redistributive activities of the government in favor of the median income earner. This paper has examined the relationship between income inequality and public consumption in both a static and a dynamic median voter model, where public consumption is financed by income taxes. In the static case, a higher relative income of the median voter has been assumed to imply a higher individual tax share for financing public consumption. Nevertheless, the substitution effect of this higher relative price for publicly provided goods and services on the individual demand for public consumption may be dominated by a wealth effect. Thus, although public expenditure plays a redistributive role in the model, higher income inequality may nevertheless imply a smaller size of the government in majority voting equilibrium. More interestingly, it has been shown that in a general equilibrium growth model, this result may be strengthened due to the effect of taxation on savings and growth. A dynamic model allows a distinction between the effects of taxation on accumulated and nonaccumulated factors of production. For instance, in the case in which public consumption expenditure is financed by a synthetic proportional income tax and labor supply is exogenous, a capital-rich median voter unambiguously prefers a greater government provision of goods and services than a capital-poor median voter. The reason for this is the following. Higher capital income taxation reduces savings, leaving the impact on (current) private consumption levels of owners of capital ambiguous. In contrast, owners of labor unambiguously reduce their private consumption levels in response to labor income taxation. However, the reduced savings of owners of capital slow down investment-driven growth of both capital and labor income. Thus, under a synthetic proportional income tax, savings adjustments leave capital-poor individuals to bear more of the tax burden if the public consumption share is increased. Allowing for endogenous labor supply additionally shifts the relative tax burden towards capital-poor agents, if capital-rich agents are also more able to cope with labor income taxation by reducing labor supply. In fact, empirically, more equal economies do not seem to have smaller governments and, thus, do not seem to be less engaged in redistribution towards the median voter through the tax system.