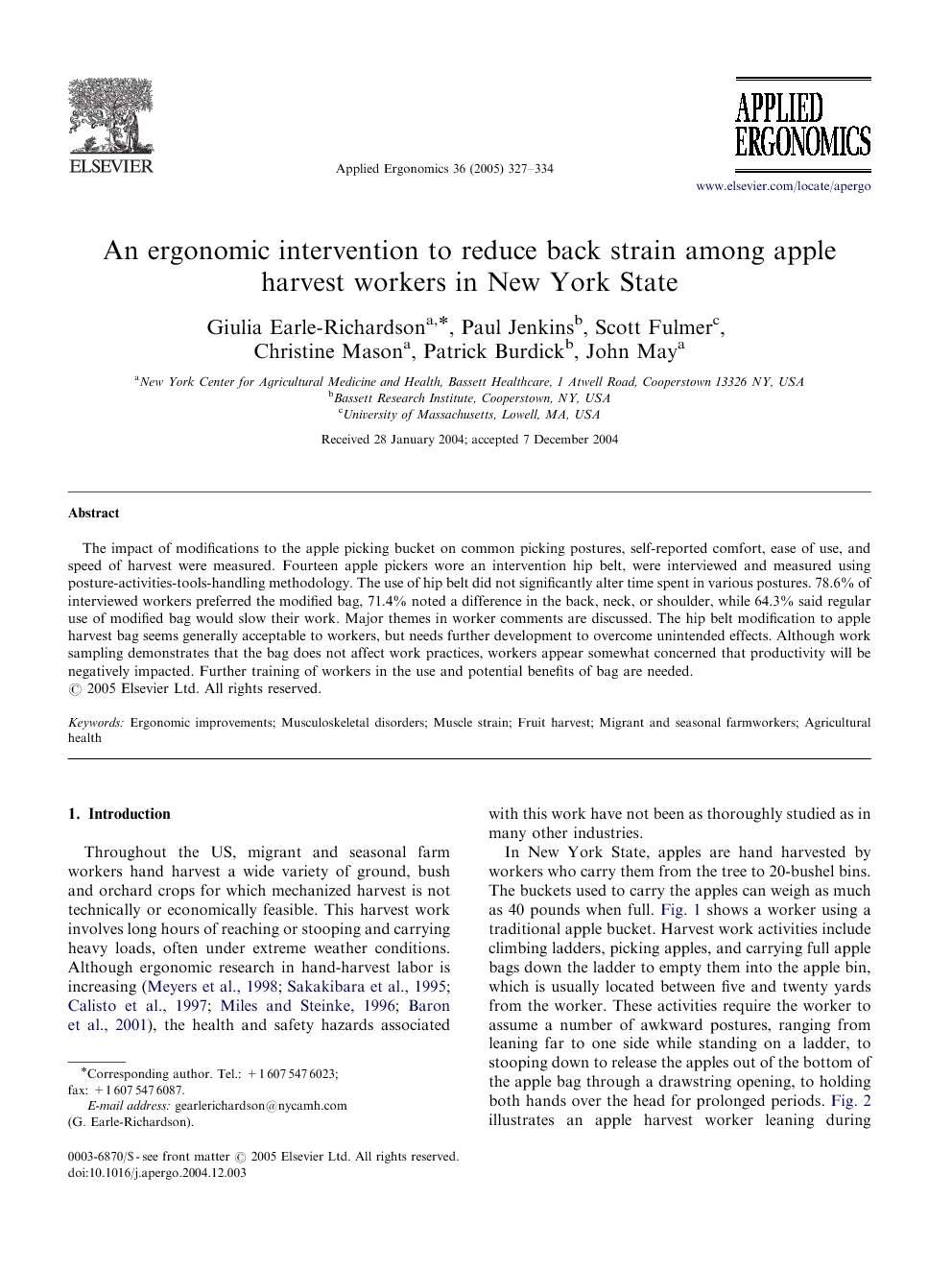 The impact of modifications to the apple picking bucket on common picking postures, self-reported comfort, ease of use, and speed of harvest were measured. Fourteen apple pickers wore an intervention hip belt, were interviewed and measured using posture-activities-tools-handling methodology. The use of hip belt did not significantly alter time spent in various postures. 78.6% of interviewed workers preferred the modified bag, 71.4% noted a difference in the back, neck, or shoulder, while 64.3% said regular use of modified bag would slow their work. Major themes in worker comments are discussed. The hip belt modification to apple harvest bag seems generally acceptable to workers, but needs further development to overcome unintended effects. Although work sampling demonstrates that the bag does not affect work practices, workers appear somewhat concerned that productivity will be negatively impacted. Further training of workers in the use and potential benefits of bag are needed.

Throughout the US, migrant and seasonal farm workers hand harvest a wide variety of ground, bush and orchard crops for which mechanized harvest is not technically or economically feasible. This harvest work involves long hours of reaching or stooping and carrying heavy loads, often under extreme weather conditions. Although ergonomic research in hand-harvest labor is increasing (Meyers et al., 1998; Sakakibara et al., 1995; Calisto et al., 1997; Miles and Steinke, 1996; Baron et al., 2001), the health and safety hazards associated with this work have not been as thoroughly studied as in many other industries. In New York State, apples are hand harvested by workers who carry them from the tree to 20-bushel bins. The buckets used to carry the apples can weigh as much as 40 pounds when full. Fig. 1 shows a worker using a traditional apple bucket. Harvest work activities include climbing ladders, picking apples, and carrying full apple bags down the ladder to empty them into the apple bin, which is usually located between five and twenty yards from the worker. These activities require the worker to assume a number of awkward postures, ranging from leaning far to one side while standing on a ladder, to stooping down to release the apples out of the bottom of the apple bag through a drawstring opening, to holding both hands over the head for prolonged periods. Fig. 2 illustrates an apple harvest worker leaning during picking. Many of these postures are assumed while the apple bag is full or partially full, which increases the likelihood of muscle and joint strain injuries. The postures associated with these activities have been cited in a number of studies as being related to musculoskeletal disorders (Pinzke, 1997; Meyers et al., 1998; Pan et al., 1999; Calisto and Kleisinger, 2001; Bjelle et al., 1979; Sakakibara et al., 1995). Previous research by the New York Center for Agricultural Medicine and Health (NYCAMH) suggests that back, neck and shoulder strain is a common problem among orchard workers (Earle-Richardson et al., 2003). This is consistent with other similar studies (Sakakibara et al., 1995; Calisto et al., 1997). Further research (Earle-Richardson et al., 2004) found that workers spend three-quarters of the time with a full or partially full bag and significant amounts of time in awkward trunk, arm or leg postures. This research also identified significant intervals of doing both of these in combination. Other studies have found proportions of apple hand harvest time spent with hands over the shoulder in a range from 40% to 50% (Calisto and Kleisinger, 2001; Sakakibara et al., 1995). The identification of high proportions of working time spent with heavy loads and in awkward postures underscores the need for the development of load or posture-modifying interventions. Once developed, such interventions must be evaluated according to a number of criteria before producing and testing on a large-scale. Specifically, it must be determined whether the intervention is likely to be effective in the orchard environment and is acceptable to workers as well as to the orchard enterprises. In this study, a community ergonomic work team made up of research staff, farm workers, orchard owners and other agricultural community members developed two ergonomic modifications to the apple-harvesting bag. One of these alterations was then evaluated by working apple harvest workers for overall acceptability, comfort and impact on picking speed.

From these analyses, it can be concluded that the hip belt intervention to displace some of the apple bag load was acceptable to a majority of study subjects, although further research into the matter of picking speed is also needed. Redesign of the hip belt-bag attachment mechanism is needed, so that it is easier to hook, so the bag can move around the worker when empty, and so that there are no extra protrusions to catch on branches. Lastly, a more fully developed orientation and training for bag users is needed, to assure that a clear understanding of the mechanism of weight transfer is understood, and so that bag adjustments are not time-consuming. When these modifications are complete, large-scale testing of the impact of the intervention on back, neck and shoulder pain and strain should be undertaken.