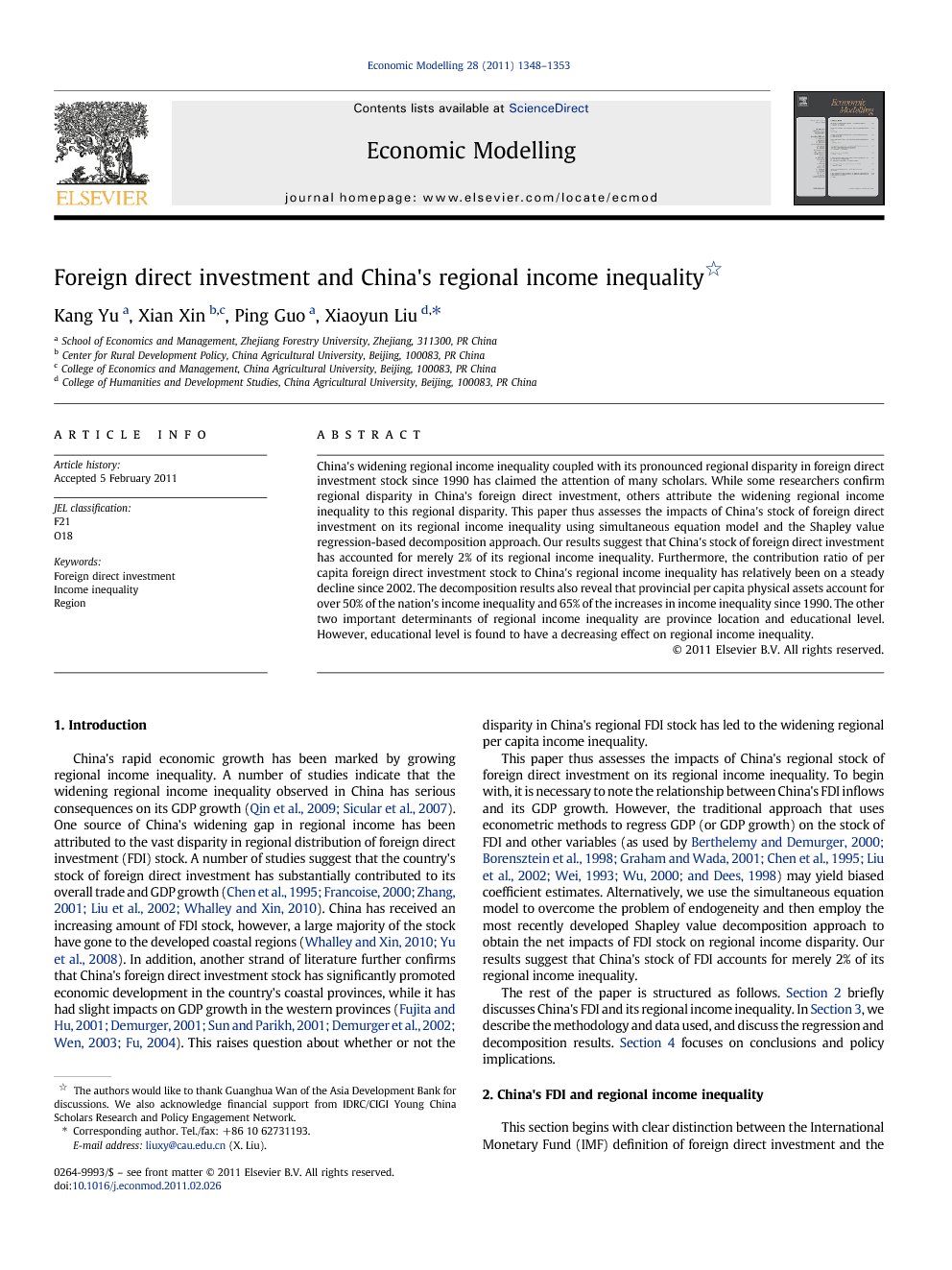 China's rapid economic growth has been marked by growing regional income inequality. A number of studies indicate that the widening regional income inequality observed in China has serious consequences on its GDP growth (Qin et al., 2009 and Sicular et al., 2007). One source of China's widening gap in regional income has been attributed to the vast disparity in regional distribution of foreign direct investment (FDI) stock. A number of studies suggest that the country's stock of foreign direct investment has substantially contributed to its overall trade and GDP growth (Chen et al., 1995, Francoise, 2000, Zhang, 2001, Liu et al., 2002 and Whalley and Xin, 2010). China has received an increasing amount of FDI stock, however, a large majority of the stock have gone to the developed coastal regions (Whalley and Xin, 2010 and Yu et al., 2008). In addition, another strand of literature further confirms that China's foreign direct investment stock has significantly promoted economic development in the country's coastal provinces, while it has had slight impacts on GDP growth in the western provinces (Fujita and Hu, 2001, Demurger, 2001, Sun and Parikh, 2001, Demurger et al., 2002, Wen, 2003 and Fu, 2004). This raises question about whether or not the disparity in China's regional FDI stock has led to the widening regional per capita income inequality. This paper thus assesses the impacts of China's regional stock of foreign direct investment on its regional income inequality. To begin with, it is necessary to note the relationship between China's FDI inflows and its GDP growth. However, the traditional approach that uses econometric methods to regress GDP (or GDP growth) on the stock of FDI and other variables (as used by Berthelemy and Demurger, 2000, Borensztein et al., 1998, Graham and Wada, 2001 and Chen et al., 1995Liu et al., 2002, Wei, 1993, Wu, 2000 and Dees, 1998) may yield biased coefficient estimates. Alternatively, we use the simultaneous equation model to overcome the problem of endogeneity and then employ the most recently developed Shapley value decomposition approach to obtain the net impacts of FDI stock on regional income disparity. Our results suggest that China's stock of FDI accounts for merely 2% of its regional income inequality. The rest of the paper is structured as follows. Section 2 briefly discusses China's FDI and its regional income inequality. In Section 3, we describe the methodology and data used, and discuss the regression and decomposition results. Section 4 focuses on conclusions and policy implications.