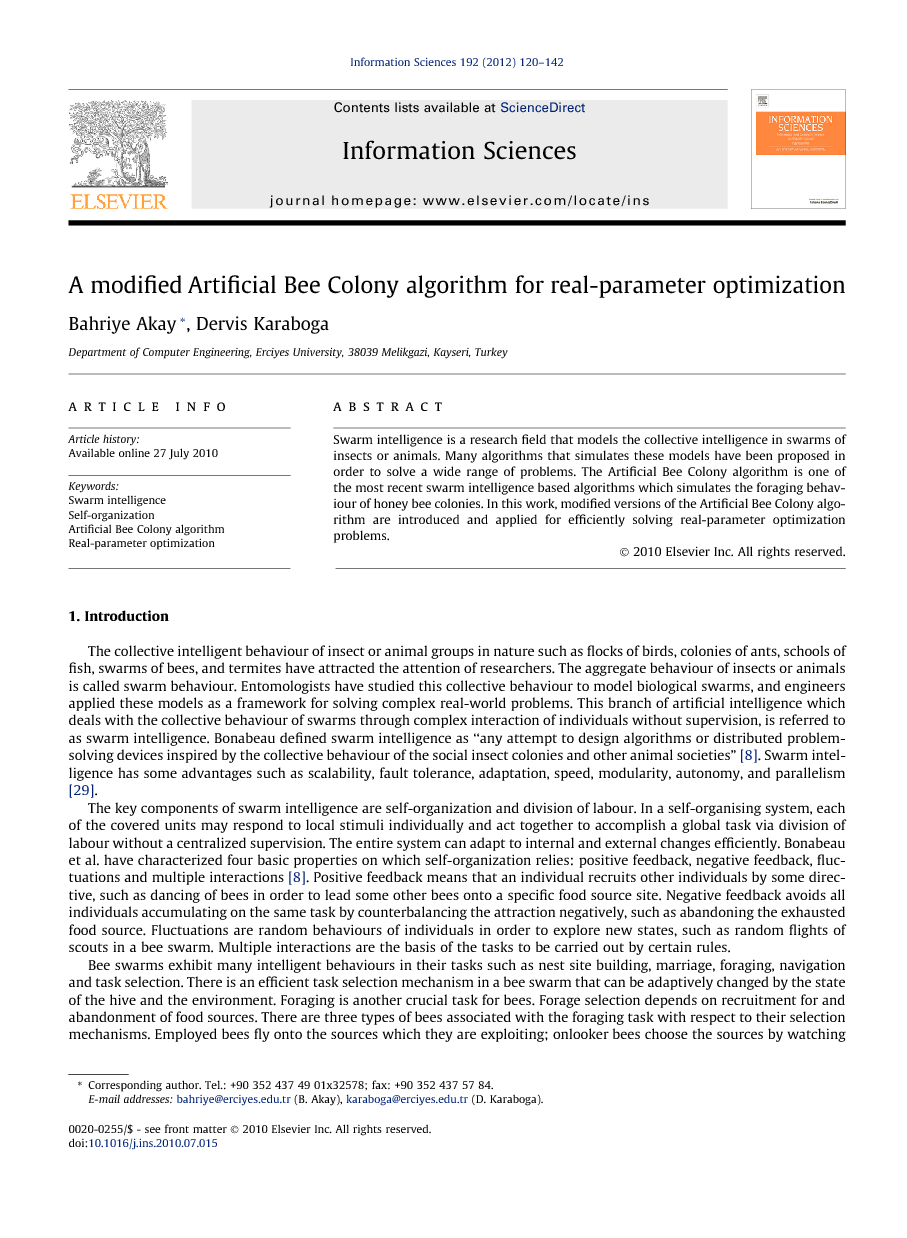 Swarm intelligence is a research field that models the collective intelligence in swarms of insects or animals. Many algorithms that simulates these models have been proposed in order to solve a wide range of problems. The Artificial Bee Colony algorithm is one of the most recent swarm intelligence based algorithms which simulates the foraging behaviour of honey bee colonies. In this work, modified versions of the Artificial Bee Colony algorithm are introduced and applied for efficiently solving real-parameter optimization problems.

The collective intelligent behaviour of insect or animal groups in nature such as flocks of birds, colonies of ants, schools of fish, swarms of bees, and termites have attracted the attention of researchers. The aggregate behaviour of insects or animals is called swarm behaviour. Entomologists have studied this collective behaviour to model biological swarms, and engineers applied these models as a framework for solving complex real-world problems. This branch of artificial intelligence which deals with the collective behaviour of swarms through complex interaction of individuals without supervision, is referred to as swarm intelligence. Bonabeau defined swarm intelligence as “any attempt to design algorithms or distributed problem-solving devices inspired by the collective behaviour of the social insect colonies and other animal societies” [8]. Swarm intelligence has some advantages such as scalability, fault tolerance, adaptation, speed, modularity, autonomy, and parallelism [29]. The key components of swarm intelligence are self-organization and division of labour. In a self-organising system, each of the covered units may respond to local stimuli individually and act together to accomplish a global task via division of labour without a centralized supervision. The entire system can adapt to internal and external changes efficiently. Bonabeau et al. have characterized four basic properties on which self-organization relies: positive feedback, negative feedback, fluctuations and multiple interactions [8]. Positive feedback means that an individual recruits other individuals by some directive, such as dancing of bees in order to lead some other bees onto a specific food source site. Negative feedback avoids all individuals accumulating on the same task by counterbalancing the attraction negatively, such as abandoning the exhausted food source. Fluctuations are random behaviours of individuals in order to explore new states, such as random flights of scouts in a bee swarm. Multiple interactions are the basis of the tasks to be carried out by certain rules. Bee swarms exhibit many intelligent behaviours in their tasks such as nest site building, marriage, foraging, navigation and task selection. There is an efficient task selection mechanism in a bee swarm that can be adaptively changed by the state of the hive and the environment. Foraging is another crucial task for bees. Forage selection depends on recruitment for and abandonment of food sources. There are three types of bees associated with the foraging task with respect to their selection mechanisms. Employed bees fly onto the sources which they are exploiting; onlooker bees choose the sources by watching the dances performed by employed bees, and scouts choose sources randomly by means of some internal motivation or possible external clue. The exchange of information among bees is the most important occurrence in the formation of the collective knowledge. The most important part of the hive in terms of exchanging information is the dancing area. Communication among bees related to the quality of food sources takes place in the dancing area. Various dances are performed on the dancing area, such as waggle, round, tremble depending on the distance of the discovered source. Although the Ant Colony Optimization (ACO) algorithm [11] simulating the behaviour of ant colonies and Particle Swarm Optimization (PSO) algorithm [30] mimicking flocks of birds are the most popular intelligence based optimization algorithms, there are some algorithms presented in the literature based on the foraging behaviour of a bee swarm [55], [36], [57], [58], [18], [42], [15], [12], [9], [3], [46], [35] and [31]. Tereshko developed a model of foraging behaviour of a honeybee colony based on reaction–diffusion equations [55]. Lucic and Teodorovic developed the Bee System based on the foraging behaviour of a bee colony for solving difficult combinatorial optimization problems [36]. Another algorithm is BeeAdHoc proposed by Wedde and Farooq, which is a routing algorithm for energy efficient routing in mobile ad hoc networks [57]. BeeAdHoc is also inspired by the foraging principles of honey bees. Yang presented a virtual bee algorithm (VBA) to solve numerical optimization problems [58]. Karaboga introduced a bee swarm algorithm called the Artificial Bee Colony (ABC) algorithm that simulates the foraging behaviour of bees [18] for multimodal and multi-dimensional numerical optimization problems. Pham et al. also described the Bees Algorithm which mimics the foraging behaviour of honey bees [42]. Ghosh and Marshall proposed a model of learning and collective decision-making in honey bees engaged in foraging [15]. They employed their model for a swarm of robots. Drias and Yahi introduced a meta-heuristic named Bees Swarm Optimization (BSO) based on the behaviour of real bees for solving maximum weight satisfiability problems [12]. Chong et al. described a bee colony optimization algorithm based on the foraging bahaviour and the waggle dance. The algorithm was applied to job shop scheduling [9]. Baig and Rashid presented Honey Bee Foraging (HBF) algorithm which simulates the foraging behaviour of the honey bees and performs swarm-based collective foraging in promising neighborhoods with individual scouting searches in other areas [3]. Quijano and Passino introduced a foraging model of honey bees for solving a class of optimal resource allocation problems [46]. Lu and Zhou developed Bee Collecting Pollen Algorithm (BCPA) by simulating the honeybees’ pollen collecting behaviour for solving the travelling salesman problem [35]. Ko et al. proposed a self-adaptive grid computing protocol called HoneyAdapt which is based on adaptive bee foraging behaviour in nature [31]. In this work, some modifications to the standard ABC algorithm are introduced, and the performance of the modified ABC algorithm is investigated for real-parameter optimization on both basic and composite functions presented at the Congress of Evolutionary Computation 2005 (CEC05). Effects of the perturbation rate that controls the frequency of parameter change, the scaling factor (step size) that determines the magnitude of change in parameters while producing a neighboring solution, and the “limit” parameter on the performance of the ABC algorithm are investigated on real-parameter optimization. The rest of the paper is organized as follows. In Section 2, the ABC Algorithm is described. In Section 3, the works related to the ABC algorithm are summarized and then the modifications to the basic ABC algorithm are introduced in Section 4. In Section 5, experiments are presented and the results are discussed and in Section 6, a thorough comparative analysis including the algorithms considered in this study is presented.

In this work, we investigated the performance of standard and modified versions of the Artificial Bee Colony algorithm and compared their performances against state-of-the-art algorithms presented in the literature. Besides comparing the Artificial Bee Colony algorithm against some other algorithms, comparisons between its own versions were also conducted. Although the standard ABC algorithm modifies only one parameter while producing a new neighboring solution, the modified ABC algorithm employs a control parameter that determines how many parameters to be modified for the production of a neighboring solution. A scaling factor that tunes the step size adaptively was introduced. From the results, it can be concluded that the standard ABC algorithm can efficiently solve basic functions while the modified ABC algorithm produces promising results on hybrid functions compared to state-of-the-art algorithms.