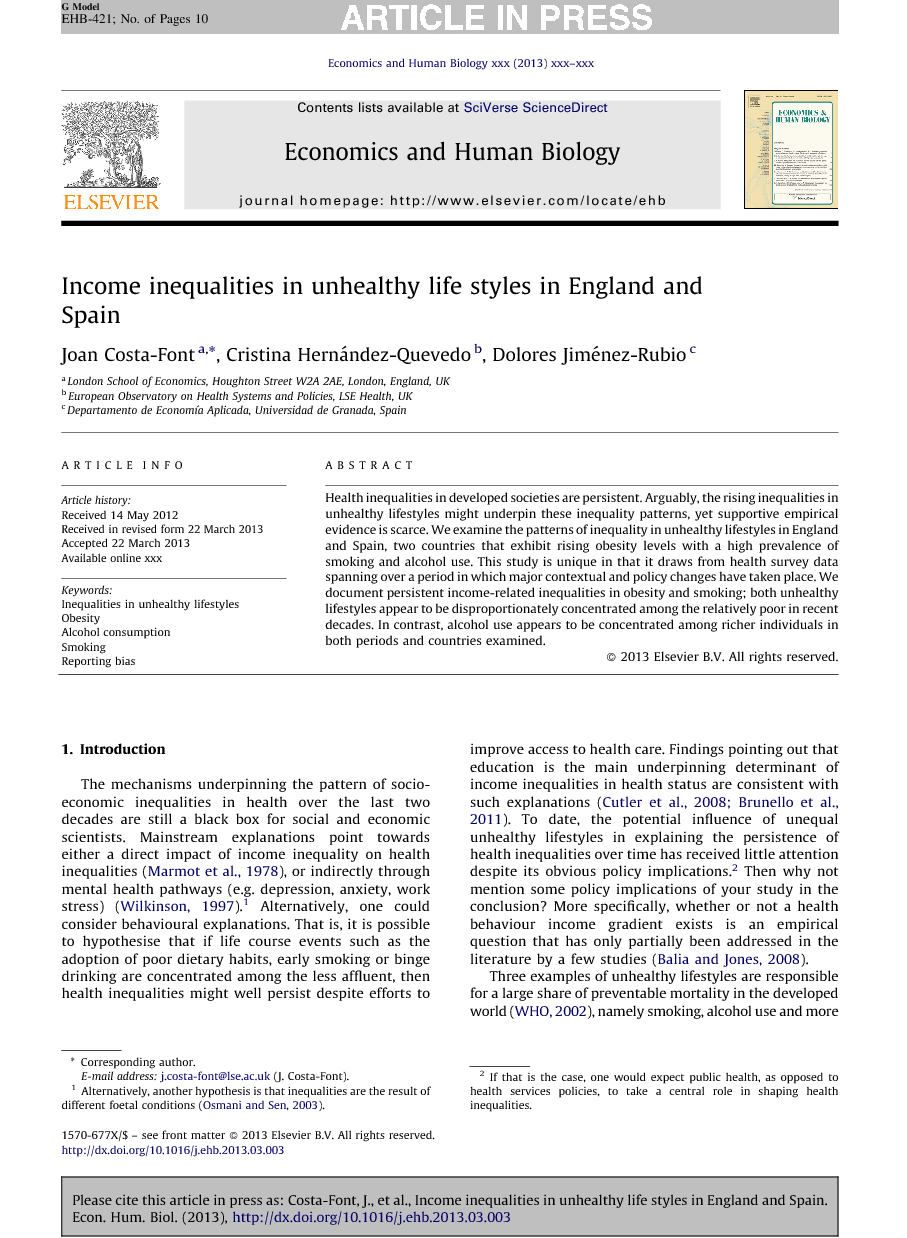 Health inequalities in developed societies are persistent. Arguably, the rising inequalities in unhealthy lifestyles might underpin these inequality patterns, yet supportive empirical evidence is scarce. We examine the patterns of inequality in unhealthy lifestyles in England and Spain, two countries that exhibit rising obesity levels with a high prevalence of smoking and alcohol use. This study is unique in that it draws from health survey data spanning over a period in which major contextual and policy changes have taken place. We document persistent income-related inequalities in obesity and smoking; both unhealthy lifestyles appear to be disproportionately concentrated among the relatively poor in recent decades. In contrast, alcohol use appears to be concentrated among richer individuals in both periods and countries examined.

The mechanisms underpinning the pattern of socioeconomic inequalities in health over the last two decades are still a black box for social and economic scientists. Mainstream explanations point towards either a direct impact of income inequality on health inequalities (Marmot et al., 1978), or indirectly through mental health pathways (e.g. depression, anxiety, work stress) (Wilkinson, 1997).1 Alternatively, one could consider behavioural explanations. That is, it is possible to hypothesise that if life course events such as the adoption of poor dietary habits, early smoking or binge drinking are concentrated among the less affluent, then health inequalities might well persist despite efforts to improve access to health care. Findings pointing out that education is the main underpinning determinant of income inequalities in health status are consistent with such explanations (Cutler et al., 2008 and Brunello et al., 2011). To date, the potential influence of unequal unhealthy lifestyles in explaining the persistence of health inequalities over time has received little attention despite its obvious policy implications.2 More specifically, whether or not a health behaviour income gradient exists is an empirical question that has only partially been addressed in the literature by a few studies (Balia and Jones, 2008). Three examples of unhealthy lifestyles are responsible for a large share of preventable mortality in the developed world (WHO, 2002), namely smoking, alcohol use and more recently, the obesity epidemic (WHO, 2006).3 Some existing studies point towards the existence of income-related inequalities in obesity (Costa-Font and Gil, 2008, Offer et al., 2010, Ljungvall and Gerdtham, 2010, Philipson and Posner, 1999 and Costa-Font et al., 2013).4 A similar effect is found when socio-economic status and smoking prevalence is examined (Hiscock et al., 2012). However, the existence of an income gradient in alcoholism is less clear-cut. A so-called “alcohol income puzzle” claims that there is a positive income gradient for moderate drinking and this effect remains even when controlling for endogeneity (Mullahy and Sindelar, 1991 and Auld, 2005). However, epidemiological studies have documented clear and persistent inequalities in alcohol use and consumption on the basis of socioeconomic status (Makela, 1999 and Harrison and Gardiner, 1999). In this study, we document trends in income inequalities in unhealthy lifestyles. The latter enables the identification of some non-causal associations that allow us to test the consistency of existing explanations for a socio-economic gradient in unhealthy lifestyles. Given the lack of Europe-wide longitudinal and cross-country European data we draw upon health survey data from samples of adults of two countries, namely England and Spain, where prior studies suggest widespread changes in health behaviour in the last few decades.5 More specifically, Spain and England top the rankings of European countries with regard to changes in obesity as well as smoking and alcohol use.6 While most existing longitudinal data lack sufficient information to undertake cross-country analysis,7 health survey data appears as a second best measurement instrument8 that can provide us with an empirical support for our questions. Our results point towards a persistent pattern of income-related inequalities in unhealthy lifestyles. However, the evolution of such inequalities differs according to the specific lifestyle factor under consideration, gender and age. The next section describes the methods employed for this analysis. Section 3 outlines the data in our study and Section 4 provides the results. Section 5 discusses some relevant methodological considerations for cross-country comparisons of inequalities in lifestyle factors, and finally Section 6 concludes.

This paper examines cross-country trends in income inequalities in unhealthy lifestyles – and more specifically, obesity, smoking and alcohol beverage intake - drawing on health survey data from Spain and England.11 Cross-sectional survey data is used for this analysis, given that only health surveys include the most complete cross-country data on unhealthy lifestyles to draw relevant policy conclusions. Patterns of inequality in unhealthy lifestyles are found to vary significantly depending on gender, but less so across the two countries. In particular, income-related inequality indices reveal alcohol use both in England and in Spain disproportionally concentrated among the better off, whilst we find the opposite result for obesity (concentrated among those worse-off). Whilst in England obesity rates are similar across genders, in Spain we find females more likely to be obese (exhibiting an obesity prevalence gap of 1.6%), which is consistent with previous studies (Costa-Font et al., 2010).12 In addition, although inequality in obesity appears to increase in Spain by 50% among females, it remains stable or declines in England. These results suggest that changes in the obesity income gradient resulting from the declining price of food and the increasing price of exercise (Lakdawalla and Philipson, 2009) may apply to Spain but not to the UK where inequality estimates are not altered (consistently with Costa-Font et al., 2011). Inequality in alcohol use is particularly significant in the English sample for both genders, whilst inequalities in obesity are higher among females in both countries. In contrast, excessive tobacco consumption concentrates among low-income males in Spain. In England, we find that tobacco consumption is concentrated among the better off in 1997, whereas it is concentrated among the worse-off in 2007 for both genders. The latter can be explained by the change in cultural attitudes towards tobacco consumption as well as to anti-smoking regulation (Costa-Font and Mossialos, 2006). Finally, it is worth mentioning that cross-country comparisons of unhealthy lifestyles suggest that besides data comparability issues, income-related inequalities in obesity are unaffected by reporting bias corrections. One of the main challenges for the cross-country analysis of lifestyles is the lack of reliable nationally representative data for the key variables of interest.13 In this study, we exemplify the limitations associated with cross-country comparisons of inequalities in unhealthy lifestyles. Regarding obesity, in particular, despite the widespread recognition that self-reported weight and height measures may underestimate true levels of obesity and overweight, there are still only a few countries, like England, that collect weight and height measured directly by a nurse. The magnitude of the self-reporting bias is relevant when measuring the prevalence rates of obesity but it does not distort the magnitude of the socioeconomic inequality indices. Further, missing data remains an issue when analysing self-reported data, as self-reported weight and height information in health surveys contain many missing values from individuals who do not declare their weight and/or height. Other important sources of variation lie in some differences in the definition of variables across different health surveys, such as those explained earlier on the measurement of alcohol consumption in both countries. Finally, if the objective is to compare the level of socio-economic inequality in unhealthy lifestyles, many of the existing inequality indices pose an important problem, as they are mean-dependent. That is, they are sensitive to the mean of the lifestyle indicator under consideration. That said, we should point out that our findings have some policy implications. More specifically, given the heterogeneity in the income inequality estimates across the lifestyle factors examined, we can conclude that targeting health promotion policies to specific sub-population of smokers and obese population is a reasonable course of policy action to counteract persistent health inequalities in western societies.