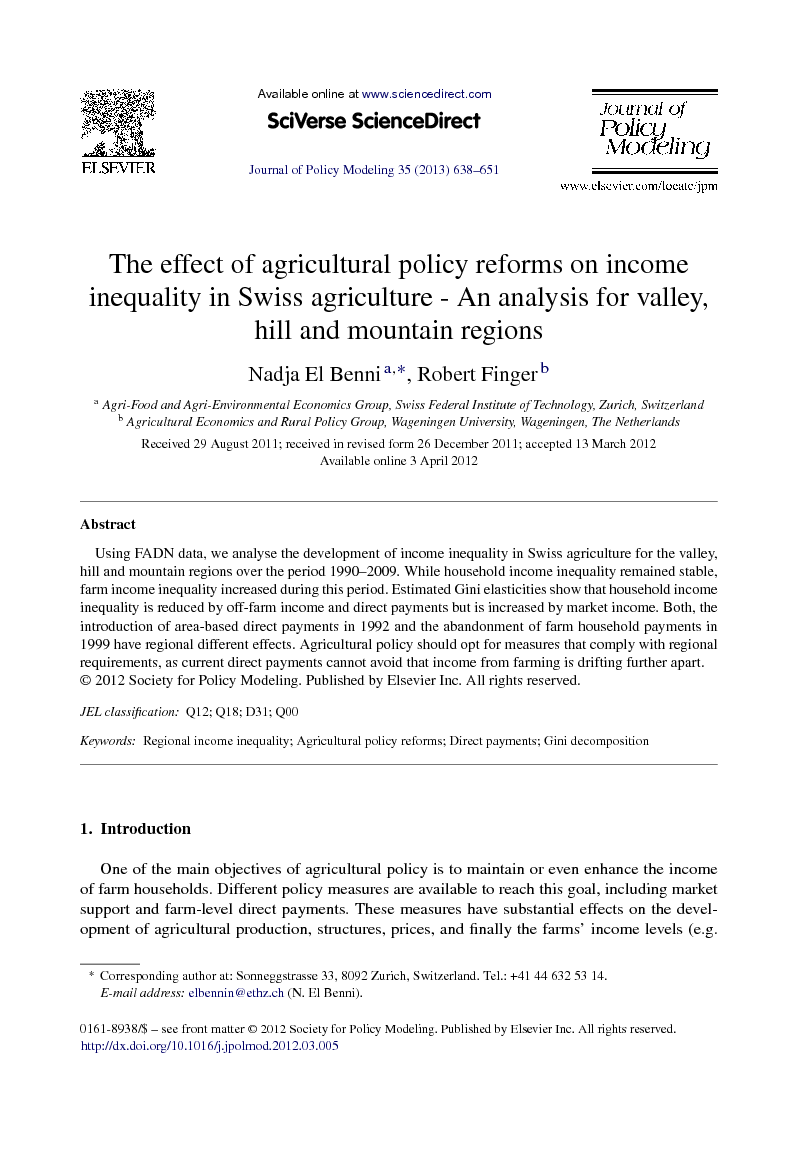 One of the main objectives of agricultural policy is to maintain or even enhance the income of farm households. Different policy measures are available to reach this goal, including market support and farm-level direct payments. These measures have substantial effects on the development of agricultural production, structures, prices, and finally the farms’ income levels (e.g. Fragoso et al., 2011, Miljokovic, 2004, Miljokovic et al., 2008, Miller, 1991 and Mishra et al., 2009). They may furthermore affect the income distribution within the farm population (i.e. income inequality). In Switzerland, market support has been reduced since the early 1990s while direct payments became much more important over time. Currently, Swiss farmers are subsidized with direct payments amounting to around 2.5 billion Swiss Francs per year. Most direct payments within Swiss agricultural policy have (at least partially) the objective of redistributing income towards the neediest parts of the farming population (Mann, 2005). In Switzerland, particularly farmers in the hill and mountain regions are handicapped by adverse production conditions and face low incomes. Thus, these farmers were always the main recipients of direct farm-level support. However, due to agricultural policy reforms the kind of support for farmers changed over time (see El Benni & Lehmann, 2010, for details). In general, the inequality (e.g. of incomes) between individuals is of highest societal and political importance (e.g. Aristei and Perugini, 2010, Lee, 2006, Park, 2001 and Taylor, 1992). This is also the case for agriculture, especially as the proportion of direct payments on farm income has increased considerably over time (e.g. Keeney, 2000, Mishra et al., 2009, Schmid et al., 2006 and von Witzke and Noleppa, 2007). Even though the responsibility of policy makers for the distribution of income among farmers has increased the distributive effects of changing income composition due to agricultural policy reforms has received little attention so far. Based on this background, the goal of this paper is to measure the effect of Swiss agricultural policy reforms on the distribution of farm household income. More specifically, these effects are estimated within three different agricultural production regions of Switzerland (the valley, the hill and the mountain regions) that are characterized by different natural production constraints. Hence, this paper expands the scope of the paper of El Benni, Mann, and Lehmann (2011) that analysed income inequality in Swiss agriculture at large. The here presented investigation of (and testing for) differences in regional developments of income inequality is motivated by the fact that Swiss agricultural policy often has regionally specific goals. Thus, also the outcome of the chosen policy measures has to be analysed regionally explicitly. In our analysis, we use FADN data from 1990 to 2009 to measure the distributional effects of changing agricultural policies on total household income. Applying the Gini decomposition approach of Lerman and Yitzhaki (1985), marginal effects of different income sources on the income distribution are calculated for each region. Nonparametric bootstrap is used to assess statistical inference on the estimated coefficients of income inequality and marginal effects as well as to test for differences between regions. The here presented results can be used by policy makers to examine the distributional effects of changing agricultural policies and to adjust support mechanisms in the specific regions. The remainder of this paper is structured as follows. In Section 2, the main developments of Swiss agricultural policy between 1990 and 2009 are described. Subsequently, the methods and data used in this paper are presented in Sections 3 and 4. In Section 5, the effects of agricultural policy reforms on the income distribution of households located in the valley, hill, and mountain regions are explored. Finally, Section 6 summarises the results and concludes with policy recommendations.