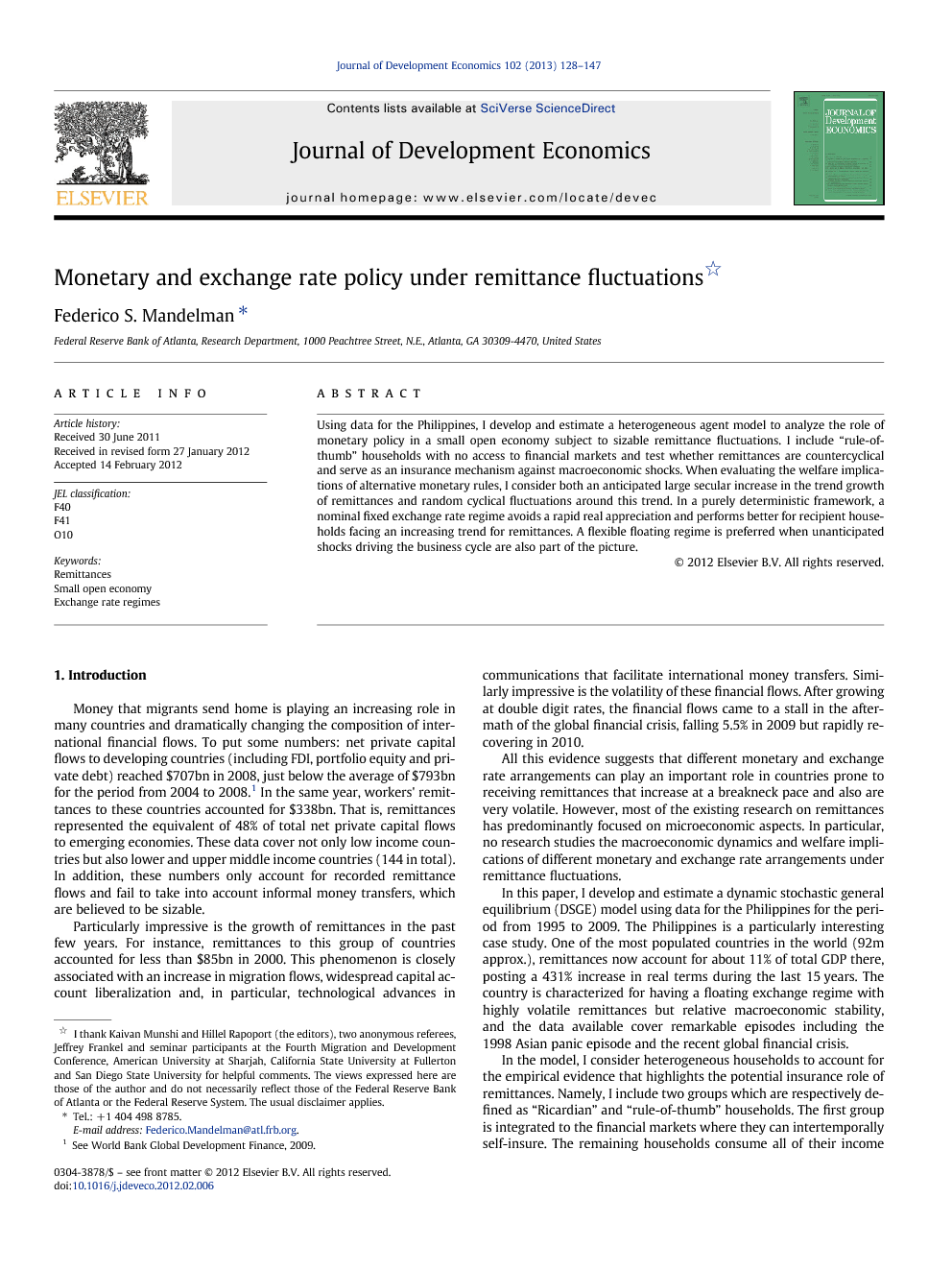 Using data for the Philippines, I develop and estimate a heterogeneous agent model to analyze the role of monetary policy in a small open economy subject to sizable remittance fluctuations. I include “rule-of-thumb” households with no access to financial markets and test whether remittances are countercyclical and serve as an insurance mechanism against macroeconomic shocks. When evaluating the welfare implications of alternative monetary rules, I consider both an anticipated large secular increase in the trend growth of remittances and random cyclical fluctuations around this trend. In a purely deterministic framework, a nominal fixed exchange rate regime avoids a rapid real appreciation and performs better for recipient households facing an increasing trend for remittances. A flexible floating regime is preferred when unanticipated shocks driving the business cycle are also part of the picture.

Money that migrants send home is playing an increasing role in many countries and dramatically changing the composition of international financial flows. To put some numbers: net private capital flows to developing countries (including FDI, portfolio equity and private debt) reached $707bn in 2008, just below the average of $793bn for the period from 2004 to 2008.1 In the same year, workers' remittances to these countries accounted for $338bn. That is, remittances represented the equivalent of 48% of total net private capital flows to emerging economies. These data cover not only low income countries but also lower and upper middle income countries (144 in total). In addition, these numbers only account for recorded remittance flows and fail to take into account informal money transfers, which are believed to be sizable. Particularly impressive is the growth of remittances in the past few years. For instance, remittances to this group of countries accounted for less than $85bn in 2000. This phenomenon is closely associated with an increase in migration flows, widespread capital account liberalization and, in particular, technological advances in communications that facilitate international money transfers. Similarly impressive is the volatility of these financial flows. After growing at double digit rates, the financial flows came to a stall in the aftermath of the global financial crisis, falling 5.5% in 2009 but rapidly recovering in 2010. All this evidence suggests that different monetary and exchange rate arrangements can play an important role in countries prone to receiving remittances that increase at a breakneck pace and also are very volatile. However, most of the existing research on remittances has predominantly focused on microeconomic aspects. In particular, no research studies the macroeconomic dynamics and welfare implications of different monetary and exchange rate arrangements under remittance fluctuations. In this paper, I develop and estimate a dynamic stochastic general equilibrium (DSGE) model using data for the Philippines for the period from 1995 to 2009. The Philippines is a particularly interesting case study. One of the most populated countries in the world (92m approx.), remittances now account for about 11% of total GDP there, posting a 431% increase in real terms during the last 15 years. The country is characterized for having a floating exchange regime with highly volatile remittances but relative macroeconomic stability, and the data available cover remarkable episodes including the 1998 Asian panic episode and the recent global financial crisis. In the model, I consider heterogeneous households to account for the empirical evidence that highlights the potential insurance role of remittances. Namely, I include two groups which are respectively defined as “Ricardian” and “rule-of-thumb” households. The first group is integrated to the financial markets where they can intertemporally self-insure. The remaining households consume all of their income every period, which is made of wages and remittances. For the last group, data confirm that migrants appear to be altruistic as they send countercyclical remittances that are useful for households' consumption smoothing. In turn, the model microfoundations justify this pattern. Finally, I perform a welfare analysis of different policy arrangements. Here, not only do I consider remittance fluctuations triggered by stochastic shocks working at business cycles fluctuations, but also long-run anticipated permanent changes in remittances that affect the balanced-growth path of the economy (and thus the equilibrium level of the real exchange rate). The idea here is to capture the large secular increase in the trend growth of remittances and the transitory fluctuations around this stable trend. Results indicate that, absent business cycles fluctuations, a nominal fixed exchange rate regime avoids a rapid real appreciation and performs better for recipient households facing an increasing trend for remittances. However, a floating regime is preferred when macroeconomic disturbances driving the business cycle are also in place. This paper is related to models that include remittances in DSGE frameworks (Acosta et al., 2009, Chami et al., 2006, Durdu and Sayan, 2010, Mandelman and Zlate, 2010 and Vacaflores and Jansen, 2009). Essentially, these are real models where prices are completely flexible, and thus monetary and exchange rate policies play no meaningful stabilization roles.2 The study is related to Ravenna and Natalucci (2008), which introduces anticipated productivity shocks that permanently affect the balanced-growth path; and to Galí et al. (2004), which studies the role of rule-of-thumb consumers in the design of monetary policy rules. Empirical studies that are related to this paper include Yang (2008), which shows that positive shocks affecting the exchange rate in countries where Filipino workers reside can result in an increase in remittances that alleviate liquidity constrained recipient households. This increase in remittances leads to an increase in education and a reduction in child labor. Singer (2010) finds that remittances increase the likelihood that policy makers adopt fixed exchange rate regimes. Finally, Yang and Choi (2007) document the insurance role of remittances in response to negative shocks in the Philippines, while Amuedo-Dorantes and Pozo (2006) and Frankel (2010) find similar results for Mexico and a large set of countries, respectively. The rest of the paper is organized as follows. Section 2 presents the model, including an extension with Greenwood–Hercowitz–Huffman (GHH) preferences that suppresses the wealth effect of remittances. Section 3 presents the data and proceeds with the Bayesian estimation. Section 4 discusses the model fit and the role of remittances. Section 5 discusses the relative empirical importance of various shocks. Section 6 quantifies the effect of transitory shocks. Section 7 presents a historic evaluation of the Philippines' data. Section 8 introduces permanent shocks and performs the welfare analysis, followed by the conclusion in Section 9.

This paper develops and estimates a general equilibrium model for a small open economy subject to sizable remittance fluctuations. The objective is to evaluate the dynamic properties and welfare implications of alternative monetary and exchange regimes. Since remittances are characterized for being very volatile but also for posting high growth rates over longer time intervals, I consider fluctuations triggered by stochastic temporary shocks and anticipated permanent changes in the trend growth. I introduce rule-of-thumb households that consume all of their disposable income to account for the micro evidence, which highlights that remittance recipient households are characterized for being liquidity constrained. In turn, the system-based estimation confirms that altruistic remittances are inversely related to the level of real wages, confirming the insurance role in smoothing the consumption path of the beneficiaries. While these countercyclical remittances help to significantly reduce the volatility of consumption and output in response to sizable shocks, I still find that the exchange rate policy has a relevant stabilization role with important welfare implications. The equilibrium level of the real exchange rate appreciates once the steady increase (trend growth) in remittances is incorporated into the information set of agents. Under price rigidities, a fixed nominal exchange rate regime leads to a sluggish real appreciation. Recipient households of these foreign currency inflows benefit, and over the transition path to the new steady state they enjoy higher consumption and real wage levels. Instead, when a floating regime and Taylor type policy arrangement is in place, the real exchange freely appreciates on impact. Furthermore, in this flexible regime, the expansionary effects of remittances are counteracted with an interest rate spike that deflates wages and consumption. In summary, recipient households are better off with the exchange rate peg when facing an uptrend in remittances. However, the flexible policy arrangement is shown to have important stabilization effects in the face of nominal and real shocks. When these shocks driving the cyclical swings around the stable trend are incorporated in the analysis, I find that remittance recipient households are better off with the flexible arrangement. Overall, the analysis suggests that countercyclical remittances and a flexible policy regime pursuing stabilization goals are useful tools to smooth the consumption path of credit constrained households and, in doing so, achieve macroeconomic stability. The Philippine data characterized by low aggregate volatility in the face of sizable shocks is consistent with this analysis. Some important caveats should be mentioned when interpreting the model results. Given the very short span of data available, the estimation exercise could not properly distinguish between the permanent and transitory components of remittance shocks. The analysis in this paper suggests that, as the data unfolds, a better characterization of this phenomenon and its corresponding policy implications is possible. In addition, the model assumes the presence of a credible central bank which is able and willing to commit to the flexible monetary policy arrangement in place. While this assumption may seem to be reasonable for the Philippines, it should be noted that the welfare analysis presented here would be misguided under the presence of time-inconsistent monetary policies and weak institutions. Finally, this study has overlooked the potential gains from a common currency for some migration corridors. Namely, if a remittance-recipient country adopted the currency of the country where most of its immigrants reside, remittance flows could benefit from a decline in transaction costs and more transparency. All this may explain, in part, why the presence of sizable remittance inflows is currently associated with an increase in the likelihood of policy makers of adopting either fixed exchange rates or a de facto dollarization (Singer, 2010). In sum, efforts aimed at strengthening the credibility of the monetary authorities, as well as making the international money transfers transparent, effective, and inexpensive should be encouraged to appropriately grasp the benefits of a flexible monetary arrangement. I postpone all these issues for future research.