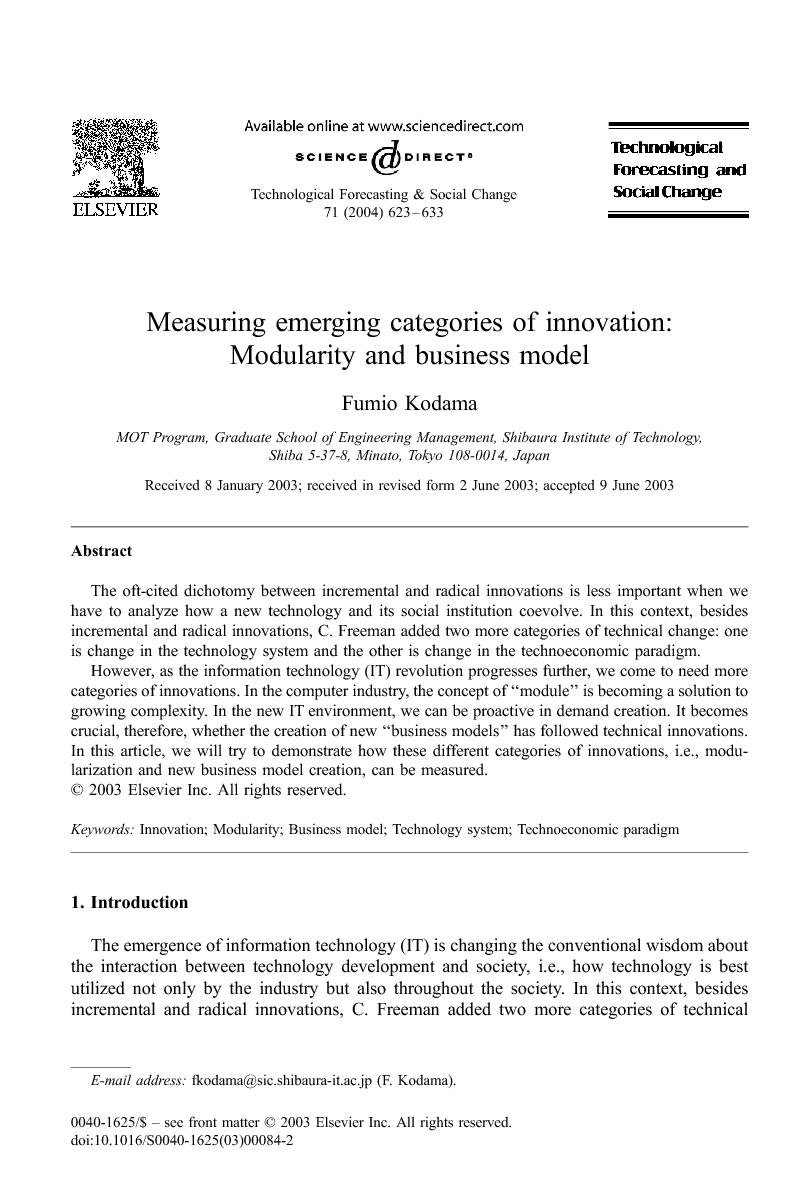 The oft-cited dichotomy between incremental and radical innovations is less important when we have to analyze how a new technology and its social institution coevolve. In this context, besides incremental and radical innovations, C. Freeman added two more categories of technical change: one is change in the technology system and the other is change in the technoeconomic paradigm. However, as the information technology (IT) revolution progresses further, we come to need more categories of innovations. In the computer industry, the concept of “module” is becoming a solution to growing complexity. In the new IT environment, we can be proactive in demand creation. It becomes crucial, therefore, whether the creation of new “business models” has followed technical innovations. In this article, we will try to demonstrate how these different categories of innovations, i.e., modularization and new business model creation, can be measured.

The emergence of information technology (IT) is changing the conventional wisdom about the interaction between technology development and society, i.e., how technology is best utilized not only by the industry but also throughout the society. In this context, besides incremental and radical innovations, C. Freeman added two more categories of technical innovation: one is change in the technology system and the other is change in the technoeconomic paradigm. While the effects of such innovations as synthetic materials, petrochemicals, and injection molding have gone beyond specific industrial sectors and thus have changed an entire industrial technology system, they are confined to the manufacturing sector. On the other hand, according to Freeman, the effects of innovations which he terms technoeconomic paradigm change, such as steam power and electric power, were so far reaching that they influenced the behavior of the entire economy. The effects of the combination of innovations associated with the electronic computer have been equally far reaching. Freeman assert that such changes in paradigm make possible a “quantum leap” in potential productivity which, however, is at first realized only in a few leading sectors. In other sectors, such gains cannot usually be realized without organizational and social changes of a far-reaching character [1]. However, as the IT revolution progresses further, we come to need more categories of innovations. One of these categories is related to the complexity of technological system. Another category is related to the value creation of new technologies. In an ever-increasing number of industrial sectors, the concept of “module” is becoming a solution to growing complexity. In manufacturing, the big assemblers have been moving away from the tightly centralized design system. By outsourcing innovations of components to many separate suppliers, the assembler gains flexibility and cuts costs. Successful innovation by private firms is closely linked to the parallel innovation in “business models” and in the structure of organizations. The remarkable achievements of leading U.S. high-tech firms, many of which have emerged in the past two decades, is inseparable from their ability to introduce new business models and to devise organizational forms that have proven to be flexible, focused, efficient, and supportive of innovation. However, there is a surprisingly small amount of quantitative evidence regarding these new phenomena of innovation. In this article, therefore, we are interested in how these effects of the new IT revolutions can be quantified. Specifically, we will demonstrate how the effects and phenomena of modularization and of new business model creation can be measured.

As the new IT revolution progresses further, new phenomena concerning innovation appeared. These are related to modularity and business model. We have tried to measure the effects that have been brought by these new phenomena. As to the modularity, we demonstrated that it could be measured by use of patent application data. We have shown that the suppliers are getting active in patent application as the modularity of the product becomes important. As to the creation of business models, we demonstrated that we could measure it by means of statistical fitting of market growth data to a diffusion model. We have shown that creation of new business models can be measured by continuous expansion of potential market size.