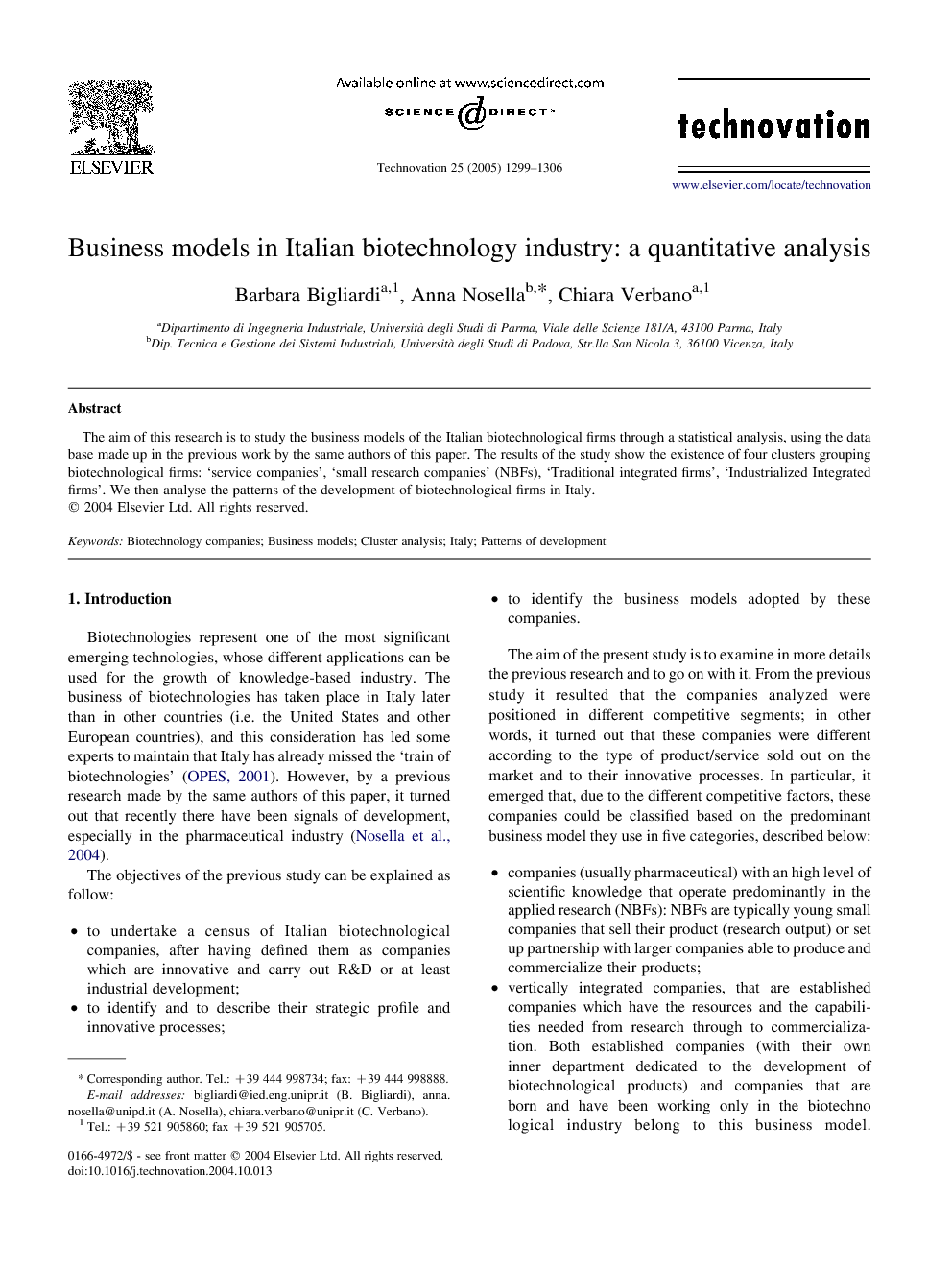 Biotechnologies represent one of the most significant emerging technologies, whose different applications can be used for the growth of knowledge-based industry. The business of biotechnologies has taken place in Italy later than in other countries (i.e. the United States and other European countries), and this consideration has led some experts to maintain that Italy has already missed the ‘train of biotechnologies’ (OPES, 2001). However, by a previous research made by the same authors of this paper, it turned out that recently there have been signals of development, especially in the pharmaceutical industry (Nosella et al., 2004). The objectives of the previous study can be explained as follow: • to undertake a census of Italian biotechnological companies, after having defined them as companies which are innovative and carry out R&D or at least industrial development; • to identify and to describe their strategic profile and innovative processes; • to identify the business models adopted by these companies. The aim of the present study is to examine in more details the previous research and to go on with it. From the previous study it resulted that the companies analyzed were positioned in different competitive segments; in other words, it turned out that these companies were different according to the type of product/service sold out on the market and to their innovative processes. In particular, it emerged that, due to the different competitive factors, these companies could be classified based on the predominant business model they use in five categories, described below: • companies (usually pharmaceutical) with an high level of scientific knowledge that operate predominantly in the applied research (NBFs): NBFs are typically young small companies that sell their product (research output) or set up partnership with larger companies able to produce and commercialize their products; • vertically integrated companies, that are established companies which have the resources and the capabilities needed from research through to commercialization. Both established companies (with their own inner department dedicated to the development of biotechnological products) and companies that are born and have been working only in the biotechnological industry belong to this business model. These companies not only develop new products/processes internally, but also establish permanent collaborative relationships with other companies such as small research firms, with the purpose to share the risk of the failure on various projects and, most of all, to widen their own knowledge base; • companies whose major areas of business are industrial development, production and commercialization: they are generally manufacturing companies that ‘buy research’ carried out by other companies, usually by the small firms previously mentioned. The number of these companies (prevalently operating in pharmaceutical industry), is quite small. The challenges that these companies have to face with are, generally, further improvements of the production processes (in order to obtain higher standards of quality), and the manufacture of products in the respect of strict technical safety-oriented specifications, established by regulatory Bodies (Pisano and Wheelwright, 1995); • companies that produce and sell services, that are companies of recent constitution that provide research (e.g. chemical synthesis, cloning and sequencing) to other companies. Generally, the capital required to start up this type of entrepreneurial mission is lower than the capital required by other companies previously described; • integrated companies that sell their products to other companies: these are firms focused on the use of biotechnologies in the development of production processes (e.g. production of monoclonal antibodies, cells and proteins), often in collaboration with the customer, and that end their role with the supply of the product (Cockburn et al., 1999). In Italy, this type of business has not yet been adopted by a large number of companies, due to the fact that biotechnologies have been applied prevalently in research processes rather than in the new product development. The five categories described above resulted by a close review of the literature and, additionally, by an empirical survey. In particular, the hypothesis on the first four models arose for the most part by the analysis of the data collected, while for the fifth category it is resulted of more valuable the review of the actual literature. For this reason, it is not possible, with the data available up to now, to state some hypotheses on the fifth category; therefore, it will be the object of further study. The aim of the present work is to study in depth and to verify the results regarding the four emergent business models through a statistical analysis, using the database made up in the previous work by the same authors. Specifically, the objective of this research is, first, to verify the existence of clusters of companies with similar characteristics, that are internally homogeneous groups (but heterogeneous among them). These clusters will be then compared with the four models in order to check for consistency with our previous work and the emerging literature. If the results will confirm these hypothesis, it will represent a statistical evidence of the existence of these four business models, and the next step of the research will be the analysis of a single representative case, with the purpose to specify and outline in depth the features of each model.

This study has helped to get a better insight into the characteristics of biotechnological firms in Italy. By analyzing the results of this study, it emerges the existence of four clusters grouping biotechnological firms; these clusters have proved to be statistically different in terms of the defined grouping variables (geographical location, age, size, level of newness of the biotechnologies used, level of R&D integration and level of industrialization/services of the sector). The statistical evidence confirms the existence of the three business models hypothesized, that is ‘Services Companies’, ‘Small Research Firms’, named NBFs, and ‘Integrated Companies’. The latter cluster (‘Integrated Firms’), can be further split into two distinct subgroups named ‘Traditional Integrated Firms’ and ‘Industrialized Integrated Firms’, respectively. The fourth business model, ‘Manufacturing Firms’, has not shown statistical significance due to the limited presence of this type of firms in Italy. By analyzing the characteristics of these clusters, we can maintain that the development of biotechnological industry in Italy has followed principally two patterns: • the first involves the integrated firms that have often introduced, by using new biotechnologies, new products or manufacturing processes in support of their traditional core business. These are frequently large firms that diversified their consolidated distinctive competences through massive investment in innovative biotechnologies. In this context, an impulse, even if moderate, to the development of biotechnological industry, has come also by the integrated firms operating in more traditional biotechnologies such as the agriculture-zootechny and the food ones with less innovative product-embodied technologies. • The second is, vice versa, characterized by the presence of new firms, mainly focused on development stages. Among this group, in fact, we can find a considerable number of companies (29.5% of the total number) of smaller size belonging to the services sector. These firms could be depicted as specialized suppliers of services towards large customers that outsource these activities. More recently, small research companies (24% over the total) have appeared on the competitive arena, whose innovative capabilities are based on broader knowledge heritage and a superior technical–scientific competences. They, consequently, need a start up capital higher than services companies. This phenomenon, that has taken place only in the last years, has been stimulated by the dynamics of merge and acquisitions that have characterized the industry (Orsenigo, 2001) and, on the other hand, by the slow diffusion of new financing instruments, supporting the growth of new entrepreneurial initiatives (Lee et al., 2001). A comparison of the Italian model of industry development with that of the main industrialized countries (Allansdottir et al., 2001), highlights the singularity of the role played by the ‘Industrialized Integrated Companies’. In the main Industrialized Countries innovative path is, typically, the result of a marked division of activities and discipline-related specialization. According to this model in fact the network of firms operates as a whole but it shares competences and business related risks. In this perspective, the experience of United States emerges as emblematic: virtuous network between Universities and research institutes has forced the establishment of NBFs, specialized in the introduction of innovative biotechnological products/processes, and also of big companies, able to carry out meaningful process innovations (Buratti, 1991 and Gambardella, 1996). Another distinctive feature is that in the US and in some European countries new biotechnologies firms are, in most cases, academic spin-offs that exploit the scientific knowledge and competences available in research centres to deploy new business. In Italy, this phenomenon is still negligible (Alberghina and Chiesa, 2002), despite it is widely acknowledged the presence of a noteworthy scientific knowledge base in different research institutes. Thus, the theoretical debate on the development of biotechnology in Italy almost unanimously agrees that one of the major drivers for the birth and growth of entrepreneurship could be the capabilities of Universities and public research centres to generate spin-offs and new business ventures able to operate autonomously on the marketplace. Further research efforts will be aimed towards deepening of the business models that have been identified and, with the present study, also statistically validated. One possible research rout will address the study of distinctive competences of firms belonging to the different business models. In this way, the analysis will be focused on the individuation of core capabilities that make it possible for these firms to reach a lasting competitive advantage. Then, the identification of successful strategic competences and the mechanisms of their generation may help both researchers and practitioners to get an insight on entrepreneurial patterns, innovative processes and capability-building paths within this industry. Last but not least, possible feature guidelines of research could include the investigation of the last business model (‘Integrated Companies that sell their products to the other companies’), that was identified in the previous work through a close review of the literature but that did not empirically emerged from the present analysis.