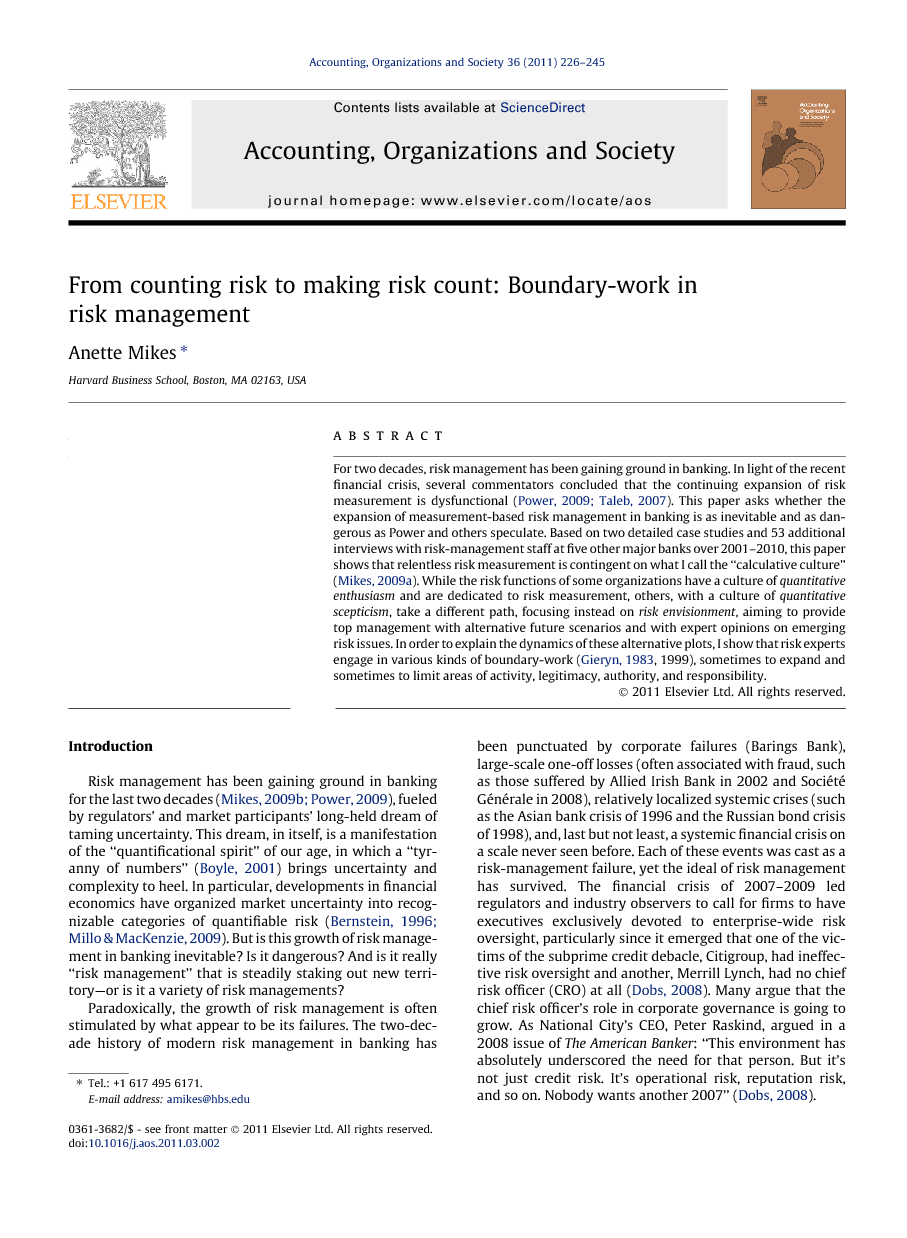 For two decades, risk management has been gaining ground in banking. In light of the recent financial crisis, several commentators concluded that the continuing expansion of risk measurement is dysfunctional (Power, 2009 and Taleb, 2007). This paper asks whether the expansion of measurement-based risk management in banking is as inevitable and as dangerous as Power and others speculate. Based on two detailed case studies and 53 additional interviews with risk-management staff at five other major banks over 2001–2010, this paper shows that relentless risk measurement is contingent on what I call the “calculative culture” (Mikes, 2009a). While the risk functions of some organizations have a culture of quantitative enthusiasm and are dedicated to risk measurement, others, with a culture of quantitative scepticism, take a different path, focusing instead on risk envisionment, aiming to provide top management with alternative future scenarios and with expert opinions on emerging risk issues. In order to explain the dynamics of these alternative plots, I show that risk experts engage in various kinds of boundary-work (Gieryn, 1983, 1999), sometimes to expand and sometimes to limit areas of activity, legitimacy, authority, and responsibility.

Despite similarities in their structural arrangements and risk-management techniques, risk functions in different organizations play out their own characteristic metrological dramas. Table 1 illustrates this point for Fraser Bank and Goethebank. Both banks introduced risk-management functions in the wake of a crisis. In both banks, those functions gained formal status and visibility through the appointment of senior risk officers and the establishment of reporting channels to the board. Both functions were successful in introducing new first-order risk measures (e.g., value-at-risk) and both regularly produced specialist risk information for top management and the board. At Fraser, economic capital, a second-order risk measure, filled a gap in value-based management by offering a risk-based measure of capital charges. Nevertheless, economic capital calculations had to be made to work by balancing the reliability and relevance of risk calculations with the fairness and internal legitimacy of the process. The legitimacy of risk measurement was thus not immediately self-evident; it was constructed. The idea at Fraser that economic capital numbers reflected the true risk profiles of business units may have been a myth, but that did not make it any less powerful. Risk managers had constructed the legitimacy of risk-based performance management. They fostered and reinforced a culture of quantitative enthusiasm, which was shared by a host of external onlookers: risk-management peers who advocated economic capital as a best practice and bank regulators who actively encouraged the expansion of risk quantification into new realms of uncertainty. Although risk calculation effectively redefined performance measurement at Fraser, the influence of the risk function stopped short of key strategic decisions, which (theoretically) were in the realm of the unmeasurable and (in practice) were claimed by the planning function. By declaring its remit to be the quantifiable risk universe, the risk function was excluded from top managerial discussions of strategic uncertainties. In contrast, the language of economic risk at Goethebank failed to redefine the planning and performance-measurement processes. In that management environment, risk calculations (second-order risk measurement such as economic capital modeling) were not seen as having the administrative objectivity of profit-and-loss accounts and statutory solvency metrics. Goethebank’s senior risk officers concerned themselves less with the measurable risk types than with the unmeasurable. Searching for critical data that could not be readily quantified, they secured relevance in the discussions preceding major strategic decisions. Their role, at the time of the case study, was to regularly set the discussion agendas for top management and to informally collect, share, and distribute information. The mode of questioning and investigation they brought to top management discussions was not diagnostic. Instead it was interactive (Simons, 1991) and these senior risk officers positioned themselves as “self-reflective and self-improving” organizational actors (Power, 2007: p. 23). They shifted the concept of risk management from a disciplinary and backward-facing practice involving narrowly defined technical expertise for the counting of risks to a forward-looking and anticipatory practice providing knowledge leadership and strategic advice to top management, proving that, even without elaborate calculations, risks can count. The regulatory imperative should not be underestimated as a driver of coercive isomorphism in the banking sector. Due to the compliance imperative, the risk functions I observed at seven banks between 2001 and 2010 were engaged in similar risk-management projects, which included developing risk measurements for market, credit, and operational risk and an economic capital approach for the internal allocation of capital. The senior risk officers I interviewed had divergent opinions on the benefits and limitations of the available risk-modeling initiatives. CROs at Fraser Bank and Banks A, B, and C were committed to extensive risk modeling and fostered a culture of quantitative enthusiasm in which risk models were regarded as robust and very relevant decision making tools, particularly for planning and performance management. In these banks, “risk-counting” experts gradually expanded the modeling infrastructure to uncover the natures and distributions of hitherto unknown uncertainties and classified and measured these as part of the operational-risk category. Once these additional risk assessments became part of the risk-measurement framework, they influenced the aggregate risk calculations (economic capital). But linking these risk calculations to planning and performance measurement was not automatic. Senior risk officers were aware that their numbers had to be made to work—a political rather than a technical challenge. There was an alternative approach to risk control that did not privilege risk measurement but rather focused on the envisionment of decision-relevant risks. Risk officers at Goethebank and Banks D and E attempted to mobilize judgment and soft instrumentation to provide top management with alternative future scenarios and with expert opinions on emerging risk issues. Their quantitative skepticism de-emphasized risk models in decision making; they saw their roles as devil’s advocates, searching for relevant intelligence and channeling it to the apex of the organization.