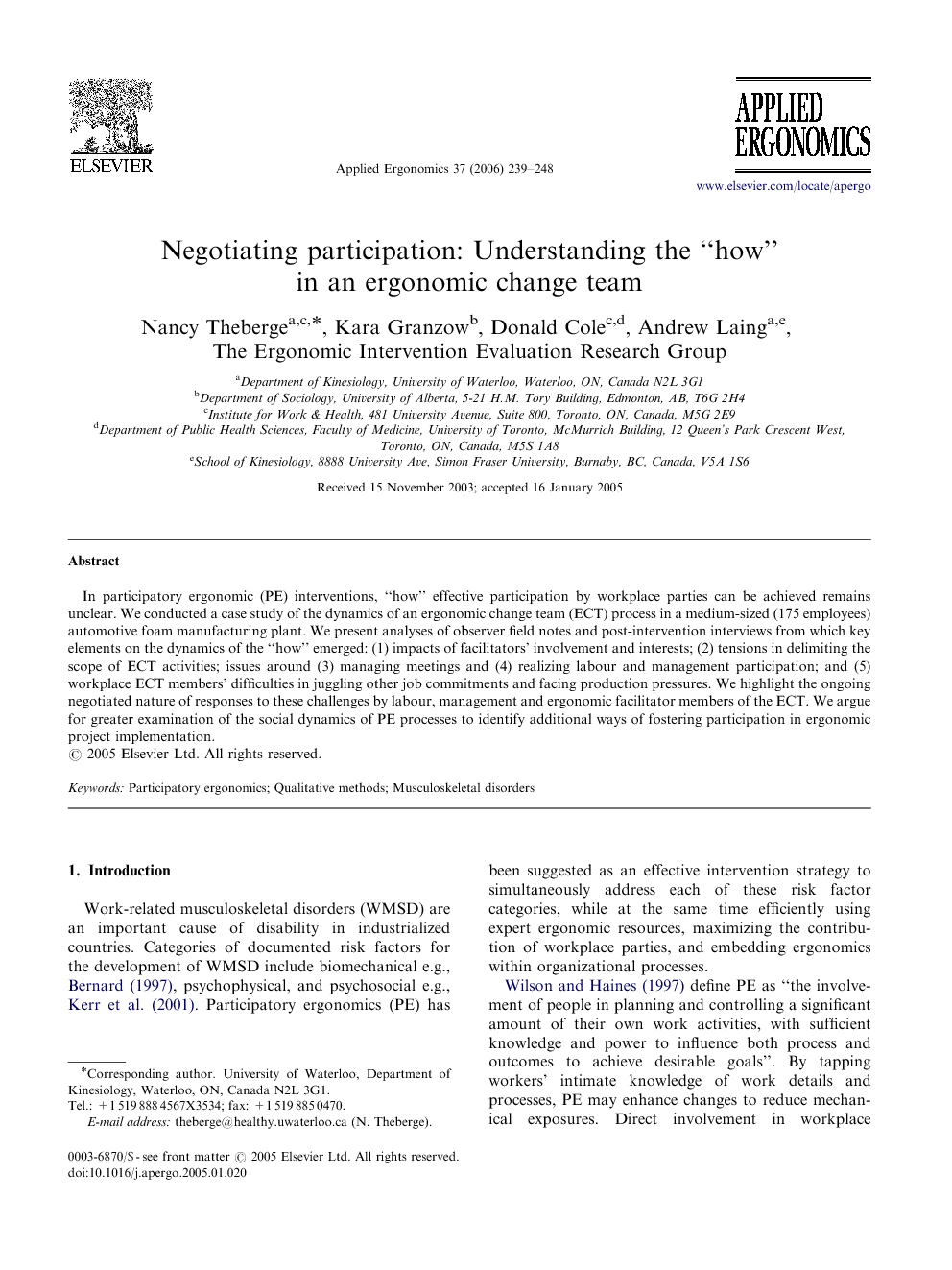 In participatory ergonomic (PE) interventions, “how” effective participation by workplace parties can be achieved remains unclear. We conducted a case study of the dynamics of an ergonomic change team (ECT) process in a medium-sized (175 employees) automotive foam manufacturing plant. We present analyses of observer field notes and post-intervention interviews from which key elements on the dynamics of the “how” emerged: (1) impacts of facilitators’ involvement and interests; (2) tensions in delimiting the scope of ECT activities; issues around (3) managing meetings and (4) realizing labour and management participation; and (5) workplace ECT members’ difficulties in juggling other job commitments and facing production pressures. We highlight the ongoing negotiated nature of responses to these challenges by labour, management and ergonomic facilitator members of the ECT. We argue for greater examination of the social dynamics of PE processes to identify additional ways of fostering participation in ergonomic project implementation.

Work-related musculoskeletal disorders (WMSD) are an important cause of disability in industrialized countries. Categories of documented risk factors for the development of WMSD include biomechanical e.g., Bernard (1997), psychophysical, and psychosocial e.g., Kerr et al. (2001). Participatory ergonomics (PE) has been suggested as an effective intervention strategy to simultaneously address each of these risk factor categories, while at the same time efficiently using expert ergonomic resources, maximizing the contribution of workplace parties, and embedding ergonomics within organizational processes. Wilson and Haines (1997) define PE as “the involvement of people in planning and controlling a significant amount of their own work activities, with sufficient knowledge and power to influence both process and outcomes to achieve desirable goals”. By tapping workers’ intimate knowledge of work details and processes, PE may enhance changes to reduce mechanical exposures. Direct involvement in workplace decisions has the potential to increase worker self-confidence, competence, and independence (Mambrey et al., 1987). PE thus speaks to both physical and social aspects of work organization (Hendrick, 1995). As Haims and Carayon (1998) indicate, “the question ‘why participation’ is readily answered, while the question ‘how are effective participatory programs achieved’” is further from being understood. Wilson and Haines (1997) cite not only positive case studies, but also examples of misapplication of PE, limitations when cynicism pervades the process, and situations where problems are generated by PE within organizations. In concerted attempts to avoid such pitfalls and promote successful PE processes, they and others have proposed various principles, pre-requisites or success factors (Nagamachi, 1995; Kourinka and Patry, 1995; Jensen, 1997; Haims and Carayon, 1998; de Looze et al., 2001). Examinations of PE processes have used both quantitative and qualitative approaches in several ways. They have (1) documented key factors related to implementation, (2) focussed on further understanding the “how” of PE processes, and (3) reflected back across a set of case studies. The first tend to rely on informal investigator experiences, documents, and quantitative survey tools, e.g., participant questionnaires (Moore and Garg, 1996; Bohr et al., 1997) to describe intervention processes. The second turn to more formal qualitative techniques such as the use of participant observations (recorded in a diary), feedback evaluation forms, and interviews with ergonomic coordinators (EC) (e.g., see Haims and Carayon, 1998) and Table 1. Other qualitative analyses have used field notes to examine the importance of plant “participatory culture” (St. Vincent et al., 2000) or questionnaires and in-depth interviews to describe aspects of influence among workers and leadership by managers during work organization changes (Erlandsson, 2002). The third set have engaged in report and article review, using a common set of characteristics (St. Vincent et al., 2000), dimensions (Haines et al., 2002), or factors (de Looze et al., 2001) to reflect on important components in PE processes. St. Vincent et al. (2000) noted the limited study of group dynamics in ergonomic committees (EC) and changes which EC undergo in understanding the nature of work, in developing competencies, and in conceptualizing ergonomics.

Our findings on key elements of the ECT process have been touched upon in other ways by a number of ergonomic researcher-practitioners. The role of evidence in PE processes, as exemplified by the interests of facilitators and the contested nature of evidence in the ECT, link with the role of conceptual frameworks and changes in understandings of ergonomics highlighted by a number of researchers (St. Vincent et al., 2000; Daniellou, 2001). The challenges in delimiting scope have strong echoes in other PE processes. Liker and colleagues (1989) described how Japanese companies used quality and safety circles as consultative fora for ergonomics issues, while US companies tended to set up independent ergonomics teams. In France, union ergonomics programs required considerable discussion in joint workplace committees of the objectives of the committees and the range of problems to be corrected (Gadbois et al., 1995). In managing meetings, training needs that we identified concurred with the findings of others, concerning both the technical aspects of risk assessment (St. Vincent et al., 2001) and the social aspects of project management (Hackman, 1990). Similar to the findings of Garmer et al. (1995) on co-education as a support for the creation of a PE process, our study shows the importance of integrating the use of tools into the ergonomics program, such that education in their use is an active and ongoing process. Our study also highlights the emphasis that ECT worker representatives placed on giving voice to shop-floor workers, as has been advocated in other ergonomics programs (Wands and Yassi, 1992). Differences in power and perspective are one of the reasons some argue for more hands-on worker input in PE (Messing and Seifert, 2001). Though representation on ECTs is usually described (Halpern and Dawson, 1997), few have highlighted the differences in representation and connection that labour and management ECT members experienced. Finally, our study supports the findings of others concerning the challenges faced by workplace ECT members in juggling time pressures (Bohr et al., 1997) and shows that these were different for labour and management members. The tensions between the pressures of production and ongoing organizational innovation for other purposes are common in PE processes (Westlander et al., 1995), pointing to the complicated connections and possible tradeoffs between ergonomics, occupational health and safety, efficiency and productivity (Novek, 1992). Differences between labour and management perspectives on such issues have been observed in action research on health promotion in other manufacturing facilities (Hugentobler et al., 1992) and collaborative research on implementation of an ergonomics program in a large newspaper company (Polanyi and Cole, 2003). The effectiveness of the ECT's work in reducing mechanical exposures in this study was mixed. Although eight of the nine changes evaluated by workers were rated as improvements and each of the 10 ergonomic change projects implemented over the course of the study period resulted in a reduction of at least one indicator of worker physical demands, no systematic changes in worker reports of perceived effort or pain severity, assessed through quantitative surveys, were observed (Laing et al., 2005). Such lack of impact is not uncommon in other forms of cooperative effort involving labour and management, such as JHSCs, where “consultation” may not lead to influence and hazardous working conditions remain unchanged (Smith, 2000). The recurring finding of disappointing impacts of such efforts highlights the need to better understand the dynamics of workplace interventions, in the manner we have reported here. Our findings of key elements that affected the ECT process in this study match some of the pre-requisites, principles and factors proposed by other authors. We have sorted these into a set of domains (see Table 1). Some commonalities are apparent in each of the domains, although Kourinka and Patry (1995) argue that there is no single “best way” to run a PE program and Wilson and Haines (1997) warn against easy prescriptions. Our choice to focus on the dynamics of the ECT process meant that the role of larger contextual factors e.g., market position of the corporation and corporate ergonomic policy, are not fully explored. Similarly, we have not dealt fully with the implications of the PE intervention for shop-floor workers (Granzow et al., 2004). Given the limited time for this study, we also could not speak to factors relevant to long-term sustainability of the PE process. Understanding of PE processes may benefit from closer examination of both the general management and industrial relations (e.g., Delbridge and Whitfield, 2001) literatures on different workplace participation schemes, including broad (e.g., joint consultation committees, work councils, representative forums) and focused (problem-solving groups in which workers have direct participation) versions. In addition, further rigorous social science research on the dynamics of ECT “processes” may provide greater clarity on factors that enable or limit different kinds of participation in PE processes.