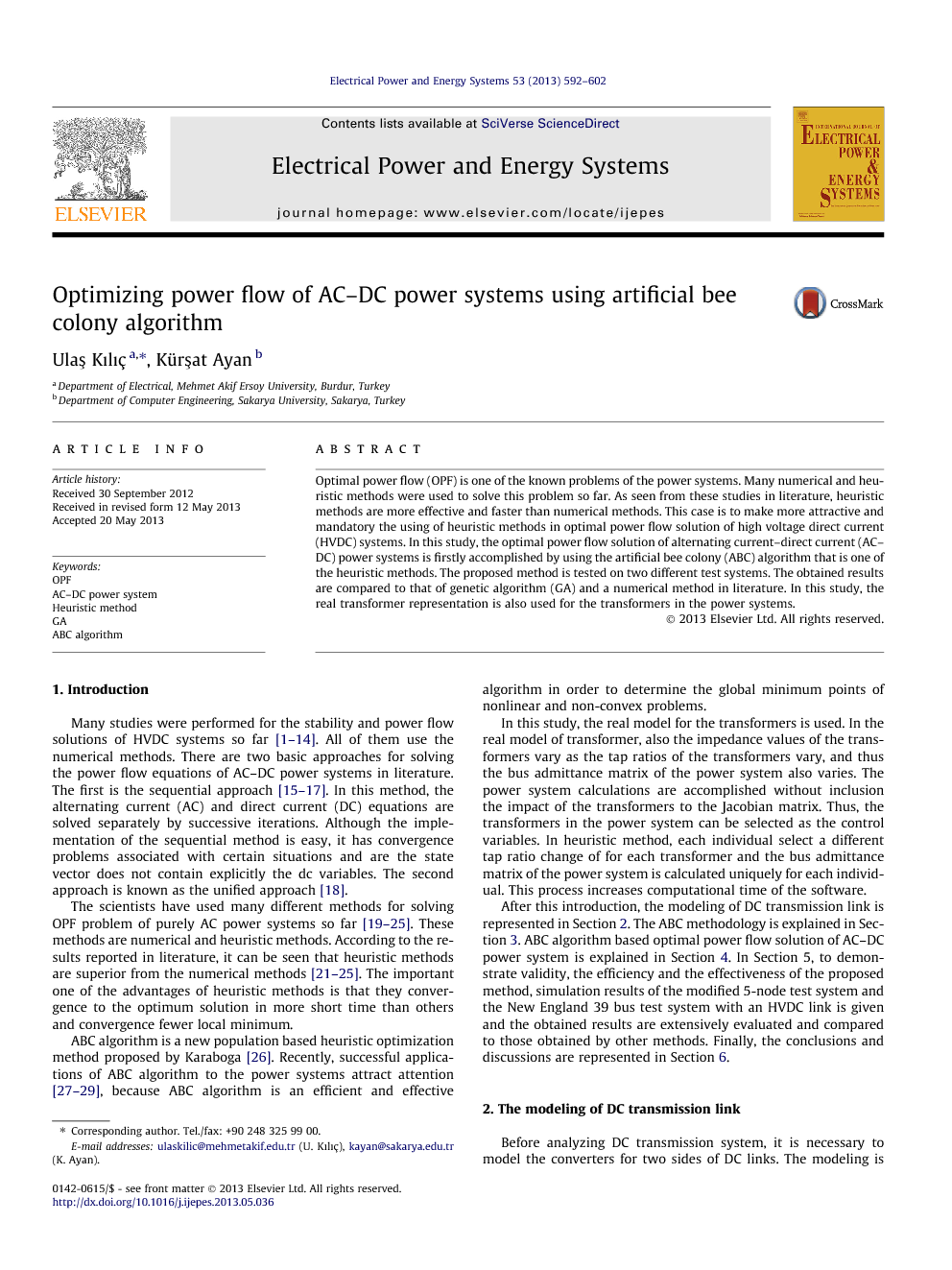 Many studies were performed for the stability and power flow solutions of HVDC systems so far [1], [2], [3], [4], [5], [6], [7], [8], [9], [10], [11], [12], [13] and [14]. All of them use the numerical methods. There are two basic approaches for solving the power flow equations of AC–DC power systems in literature. The first is the sequential approach [15], [16] and [17]. In this method, the alternating current (AC) and direct current (DC) equations are solved separately by successive iterations. Although the implementation of the sequential method is easy, it has convergence problems associated with certain situations and are the state vector does not contain explicitly the dc variables. The second approach is known as the unified approach [18]. The scientists have used many different methods for solving OPF problem of purely AC power systems so far [19], [20], [21], [22], [23], [24] and [25]. These methods are numerical and heuristic methods. According to the results reported in literature, it can be seen that heuristic methods are superior from the numerical methods [21], [22], [23], [24] and [25]. The important one of the advantages of heuristic methods is that they convergence to the optimum solution in more short time than others and convergence fewer local minimum. ABC algorithm is a new population based heuristic optimization method proposed by Karaboga [26]. Recently, successful applications of ABC algorithm to the power systems attract attention [27], [28] and [29], because ABC algorithm is an efficient and effective algorithm in order to determine the global minimum points of nonlinear and non-convex problems. In this study, the real model for the transformers is used. In the real model of transformer, also the impedance values of the transformers vary as the tap ratios of the transformers vary, and thus the bus admittance matrix of the power system also varies. The power system calculations are accomplished without inclusion the impact of the transformers to the Jacobian matrix. Thus, the transformers in the power system can be selected as the control variables. In heuristic method, each individual select a different tap ratio change of for each transformer and the bus admittance matrix of the power system is calculated uniquely for each individual. This process increases computational time of the software. After this introduction, the modeling of DC transmission link is represented in Section 2. The ABC methodology is explained in Section 3. ABC algorithm based optimal power flow solution of AC–DC power system is explained in Section 4. In Section 5, to demonstrate validity, the efficiency and the effectiveness of the proposed method, simulation results of the modified 5-node test system and the New England 39 bus test system with an HVDC link is given and the obtained results are extensively evaluated and compared to those obtained by other methods. Finally, the conclusions and discussions are represented in Section 6.

ABC algorithm was applied to OPF problem of purely AC power systems and its validity and efficiency in this area was shown. In this study, a power flow optimization of two AC–DC test systems is realized by using ABC algorithm for the first time and the real transformer representation is also used for the transformers in the power systems. For this purpose, the modified 5-node test system and the modified New England 39-bus test system are selected and OPF problem of these are solved to show the validity, the efficiency, and the effectiveness of ABC algorithm. The comparative results of ABC algorithm, GA, and the numerical method proposed in Ref. [38] for two different cases which are explained in simulation results are given in Table 7 for first test system and in Table 10 for the second test system. The analysis results given in Table 7 and Table 10 show clearly that ABC algorithm is faster than GA and the numerical method in Ref. [38] and again the fuel cost and the line losses obtained by ABC algorithm are less than that of Ref. [38] and GA. Therefore, ABC algorithm can be preferred for OPF solution of AC–DC systems as well as pure AC systems. Furthermore, ABC algorithm converges reliably and rapidly to the optimal solution and can be also adapted to the other areas. In future, ABC algorithm can be applied effectively to OPF problem of the large-scale HVDC systems.