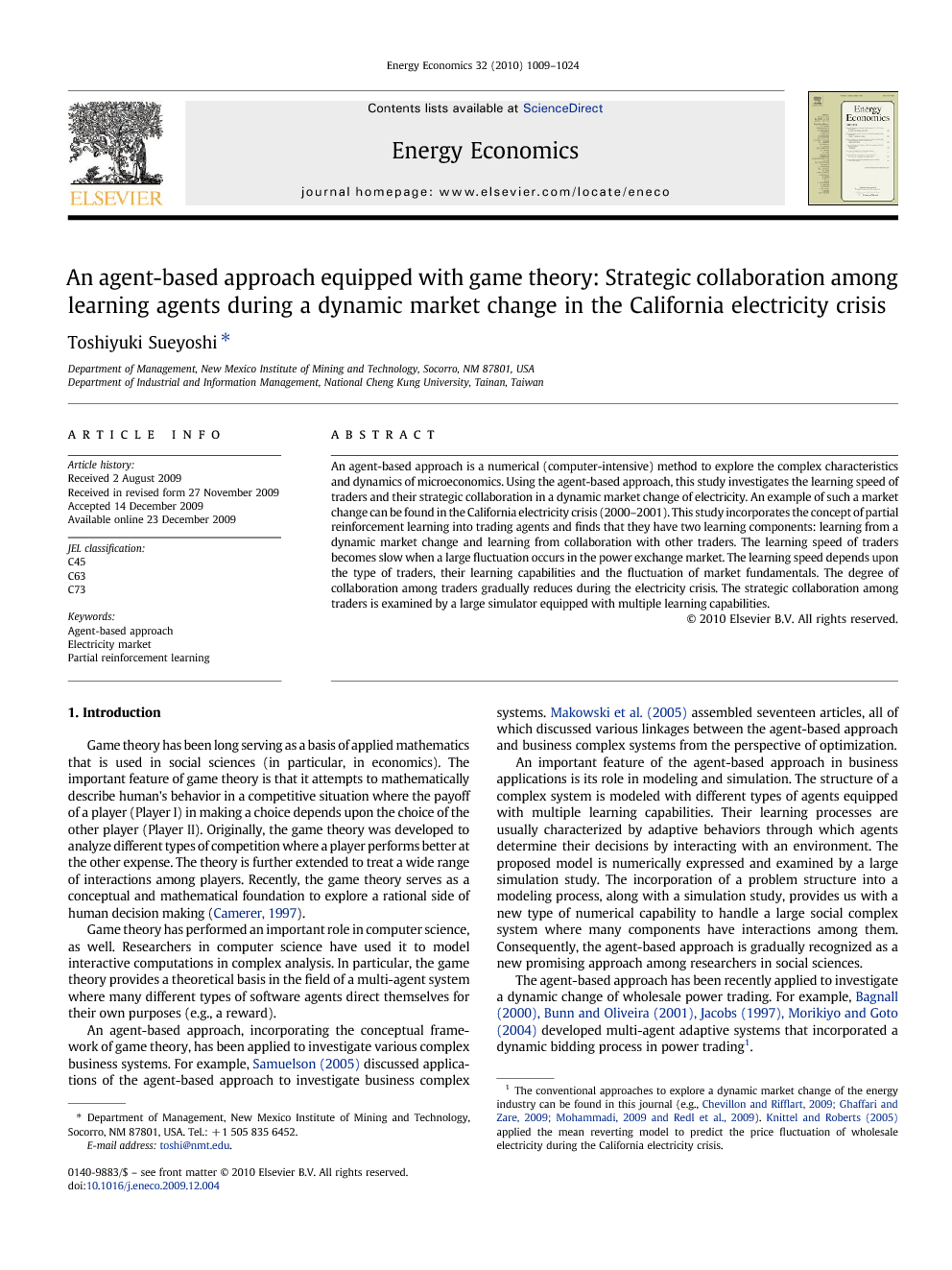 An agent-based approach is a numerical (computer-intensive) method to explore the complex characteristics and dynamics of microeconomics. Using the agent-based approach, this study investigates the learning speed of traders and their strategic collaboration in a dynamic market change of electricity. An example of such a market change can be found in the California electricity crisis (2000–2001). This study incorporates the concept of partial reinforcement learning into trading agents and finds that they have two learning components: learning from a dynamic market change and learning from collaboration with other traders. The learning speed of traders becomes slow when a large fluctuation occurs in the power exchange market. The learning speed depends upon the type of traders, their learning capabilities and the fluctuation of market fundamentals. The degree of collaboration among traders gradually reduces during the electricity crisis. The strategic collaboration among traders is examined by a large simulator equipped with multiple learning capabilities.

The previous work of BM&R (2006) explored the psychological aspect of human's game-based learning in economics. Their study examined various assertions related to the partial reinforcement learning of human decision making. Their claims are valid and useful in the investigation of economic activities in games. To document how their claims are practical from the perspective of computer science, this study has numerically examined the collective behaviors of traders before and during the California electricity crisis. The numerical findings obtained from the proposed simulator are summarized in the following manner. First, the learning speed of agents was influenced by a dynamic change of market fundamentals. The learning speed of all agents during the crisis became slower than the pre-crisis. The adaptive behavior of Type II was slower than that of Type I because Type I was more adaptive than Type II. Second, large agents in Type I adjusted slowly to a market change of electricity because they were market powers in an electricity exchange market. Large agents in Type II also adjusted slowly to the market change, but the adjustment rate of agents in Type II is less than that of Type I. Third, generators equipped with Type I learning capabilities could improve their winning probabilities by collaborating with other generators during the crisis. The two collaboration strategies (A & B) were more effective than the individual strategy (implying no collaboration) in terms of enhancing their winning probabilities. Furthermore, the collaboration strategy A was more effective for generators than the strategy B. In contrast, the collaboration strategy B was more effective for wholesalers than the strategy A. Finally, all agents learned to collaborate more slowly during the crisis. Agents learned to collaborate in the early period of the supergame, but their collaboration gradually broken down along with the supergame. The dismemberment occurred on wholesalers more seriously than generators. Most of wholesalers did not stay in a same team along with the repeated supergame. The average existence probability of Strategy B was less than that of Strategy A because agents in Strategy B needed to more carefully collaborate with others than Strategy A. This study is methodologically not perfect. The research has several drawbacks that need to be overcome in future. As future extensions, we need to mention the three research agendas: First, this study used Types I and II adaptive behaviors. Agents in the two groups do not exhaust all possibilities regarding the adaptive behaviors of traders. There are many types of adaptive behaviors which are different from Types I and II. This study does not examine such robustness for every possible alternative set of behavioral assumptions. It can be imagined that the results obtained from this study are sensitive to the model selection for agents. Therefore, we need to investigate further other behavioral models for power trading agents. Second, this study does not sufficiently explore all possible collaboration strategies among agents. We considered only Strategies A and B. Hence, we need to explore the strategic collaboration under current deregulation policies on electric utilities. That is another important future extension of this study. Third, the empirical results obtained in this study are limited on the data set related to the California electricity crisis. Therefore, we need to extend it by applying the proposed approach to other data sets such as CO2 emission trade. Such a research effort will enhance the reputation and practicality of the proposed agent-based approach that can explore various aspects of business complexity (e.g., traders' bidding strategies and their collaboration). Finally, it is hoped that this study makes a contribution in the field of agent-based approach for whole sale power trade. We look forward to seeing future extensions as discussed in this study.