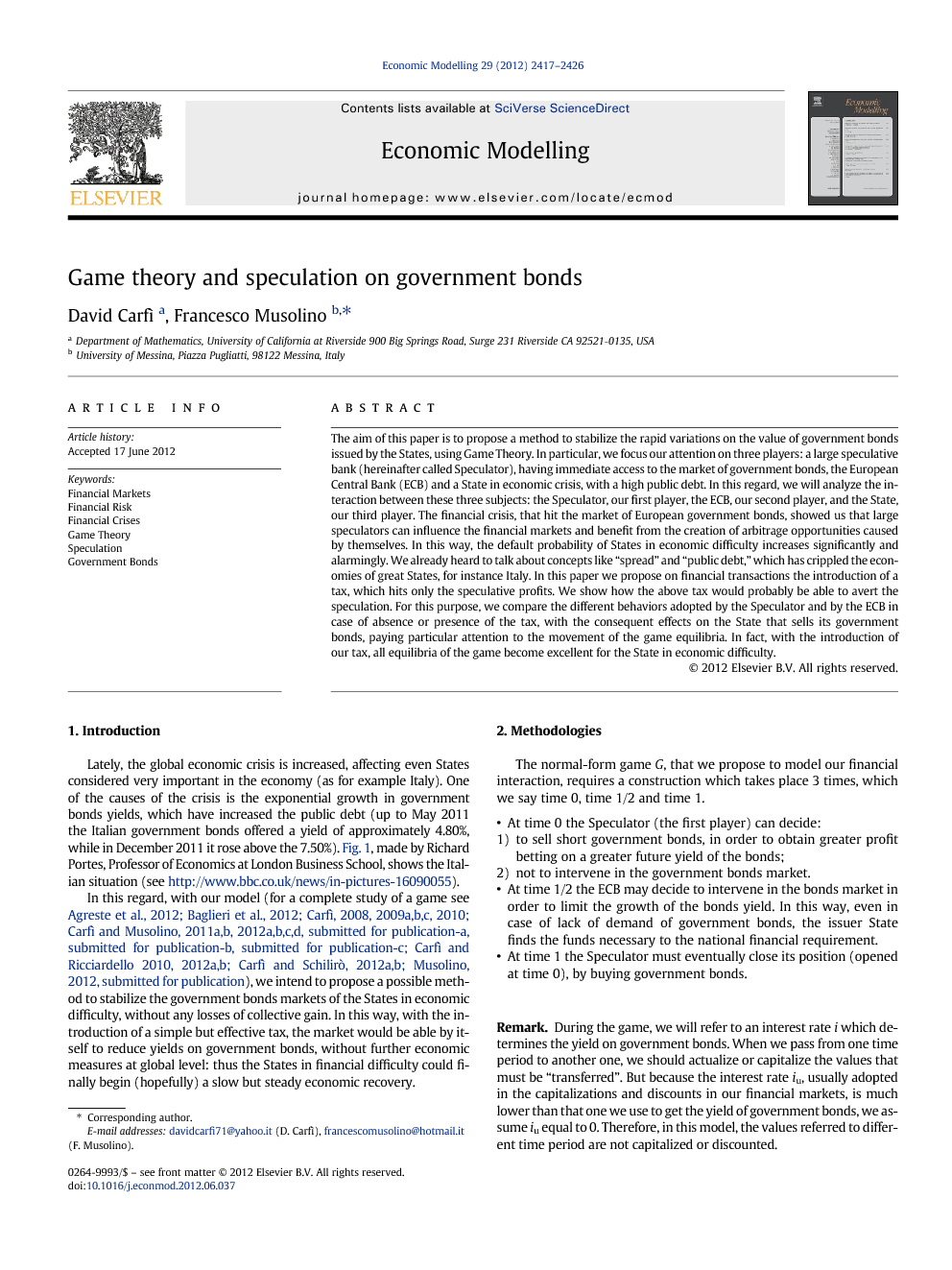 The aim of this paper is to propose a method to stabilize the rapid variations on the value of government bonds issued by the States, using Game Theory. In particular, we focus our attention on three players: a large speculative bank (hereinafter called Speculator), having immediate access to the market of government bonds, the European Central Bank (ECB) and a State in economic crisis, with a high public debt. In this regard, we will analyze the interaction between these three subjects: the Speculator, our first player, the ECB, our second player, and the State, our third player. The financial crisis, that hit the market of European government bonds, showed us that large speculators can influence the financial markets and benefit from the creation of arbitrage opportunities caused by themselves. In this way, the default probability of States in economic difficulty increases significantly and alarmingly. We already heard to talk about concepts like “spread” and “public debt,” which has crippled the economies of great States, for instance Italy. In this paper we propose on financial transactions the introduction of a tax, which hits only the speculative profits. We show how the above tax would probably be able to avert the speculation. For this purpose, we compare the different behaviors adopted by the Speculator and by the ECB in case of absence or presence of the tax, with the consequent effects on the State that sells its government bonds, paying particular attention to the movement of the game equilibria. In fact, with the introduction of our tax, all equilibria of the game become excellent for the State in economic difficulty.

We just studied two games with the same agents: the first game is a simplified representation of the reality; in the second one we suggest a possible regulatory model that provides the stabilization of the government bonds market through the introduction of a tax on government bonds transactions. 11.0.1. No tax game Without the introduction of the tax, the defensive and Nash equilibria lead most likely in the point B. But the point B is not a good point of arrival for the State in economic difficulty, because the yield on its bonds remains at high levels and unchanged. In this regard, the only possible satisfactory solution is a cooperative solution between the two players: the Speculator and the ECB play the strategies x = 0 and y = 1 arriving to point A′ and dividing the collective win by contract (at the same time, the yield on government bonds of the State decreases, and so the total gain of the three subjects of our game is the same than that one in the point B′). But the cooperative solution leaves us dissatisfied. In fact the cooperative solution is difficult to implement because the ECB should achieve an agreement with the Speculator before that the Speculator plays a strategy x > 0, and is almost impossible to know in advance the intentions of all the potential speculators in the bonds market. For this reason, it is necessary a preventive economic measure. 11.0.2. Game with tax In the regulatory model that we proposed with the introduction of our tax, we note that the Nash and defensive equilibria of the game move to point A. The point A is an optimal point for the State in economic difficulty, because the yield on its bonds is reduced, allowing the State to move the first step towards economic recovery. But in this case, the point A′ is also a quite good point for the Speculator and the ECB, because they are on the weak maximal Pareto boundary: we transformed the politically more desirable solution in a solution convenient for all parties involved. In this way, the collective gain is not subject to losses than the no tax game, and once and for all we solve the problem of too high yield on government bonds. Moreover, the introduction of our tax is a preventive deterrent for the presence of the speculators in the bonds market.