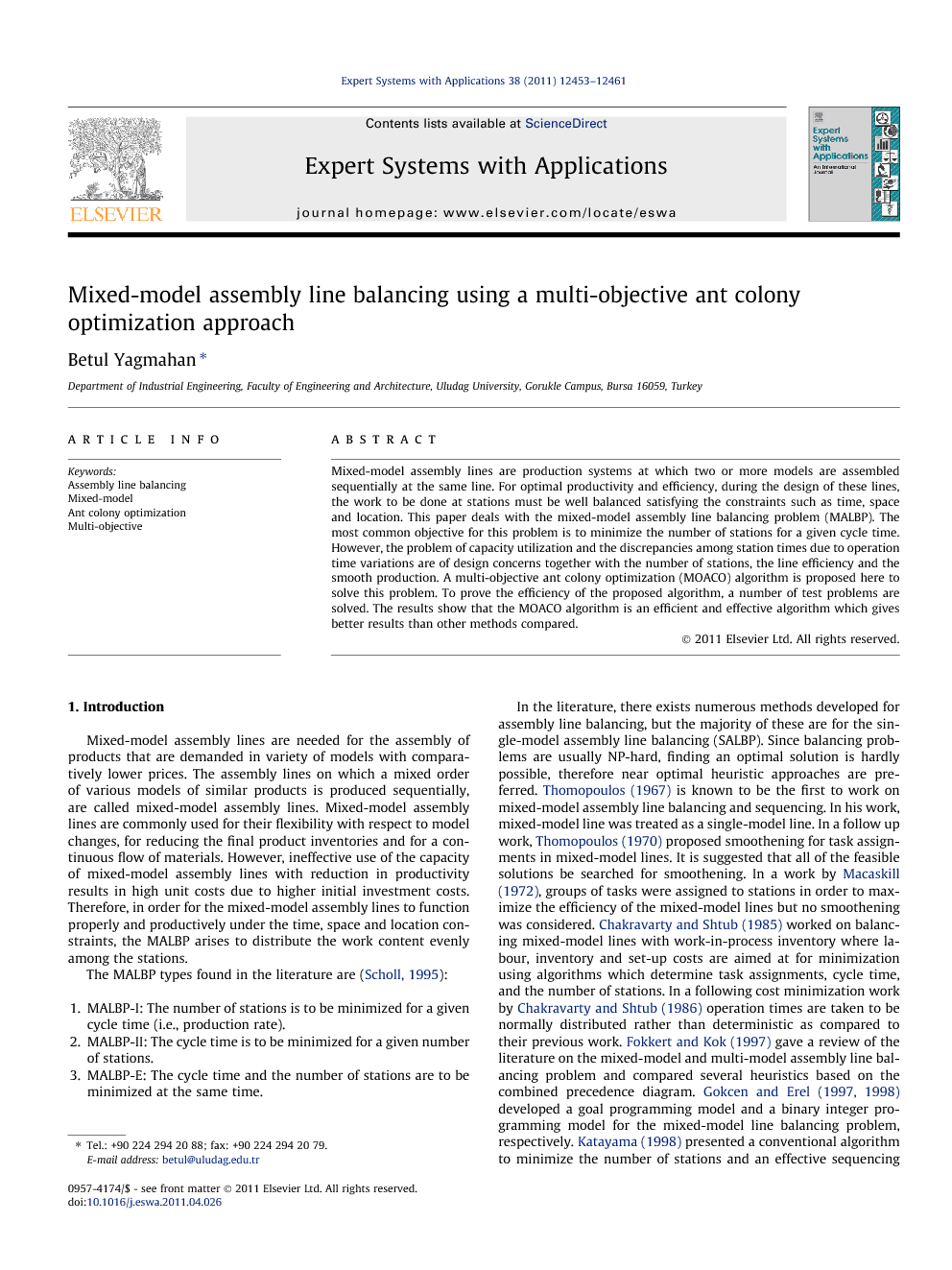 Mixed-model assembly lines are production systems at which two or more models are assembled sequentially at the same line. For optimal productivity and efficiency, during the design of these lines, the work to be done at stations must be well balanced satisfying the constraints such as time, space and location. This paper deals with the mixed-model assembly line balancing problem (MALBP). The most common objective for this problem is to minimize the number of stations for a given cycle time. However, the problem of capacity utilization and the discrepancies among station times due to operation time variations are of design concerns together with the number of stations, the line efficiency and the smooth production. A multi-objective ant colony optimization (MOACO) algorithm is proposed here to solve this problem. To prove the efficiency of the proposed algorithm, a number of test problems are solved. The results show that the MOACO algorithm is an efficient and effective algorithm which gives better results than other methods compared.

The significance of mixed-model type assembly lines is quite obvious when the current consumer trends require variety of models of a product to be supplied instantly at even lower prices. Production facilities with assembly lines must continuously meet the requirements of improved productivity and efficiency in a competitive environment. Line balancing is an approach to improve the effectiveness of such facilities. In this study, we consider the mixed-model assembly line balancing problem to minimize the balance delay, the smoothness index between stations and the smoothness index within stations for a given cycle time. In recent work of others, metaheuristic approaches are commonly preferred to solve combinatorial optimization problems. In this paper, the proposed algorithm to solve this problem which is known as NP-hard type is based on ACO metaheuristic. In order to verify the performance of the proposed algorithm, computational experiments are conducted on test problems. Results show that the proposed ant colony algorithm MOACO performs better than RPWM heuristic, GA and AIS algorithm for MALBP-I with acceptable computation times. Obtaining a perfect balance in assembly lines is not a sufficient condition for effective mixed-model line utilization. Our future work will concentrate on the integration of line balancing and sequencing for new models within a hierarchical planning structure, since effective line sequencing can only be done on a well-balanced line. Additionally, a parameter tuning analysis can be considered for improving the solution performance, together with solving many variants of the problem for serial lines, parallel lines and U-lines.