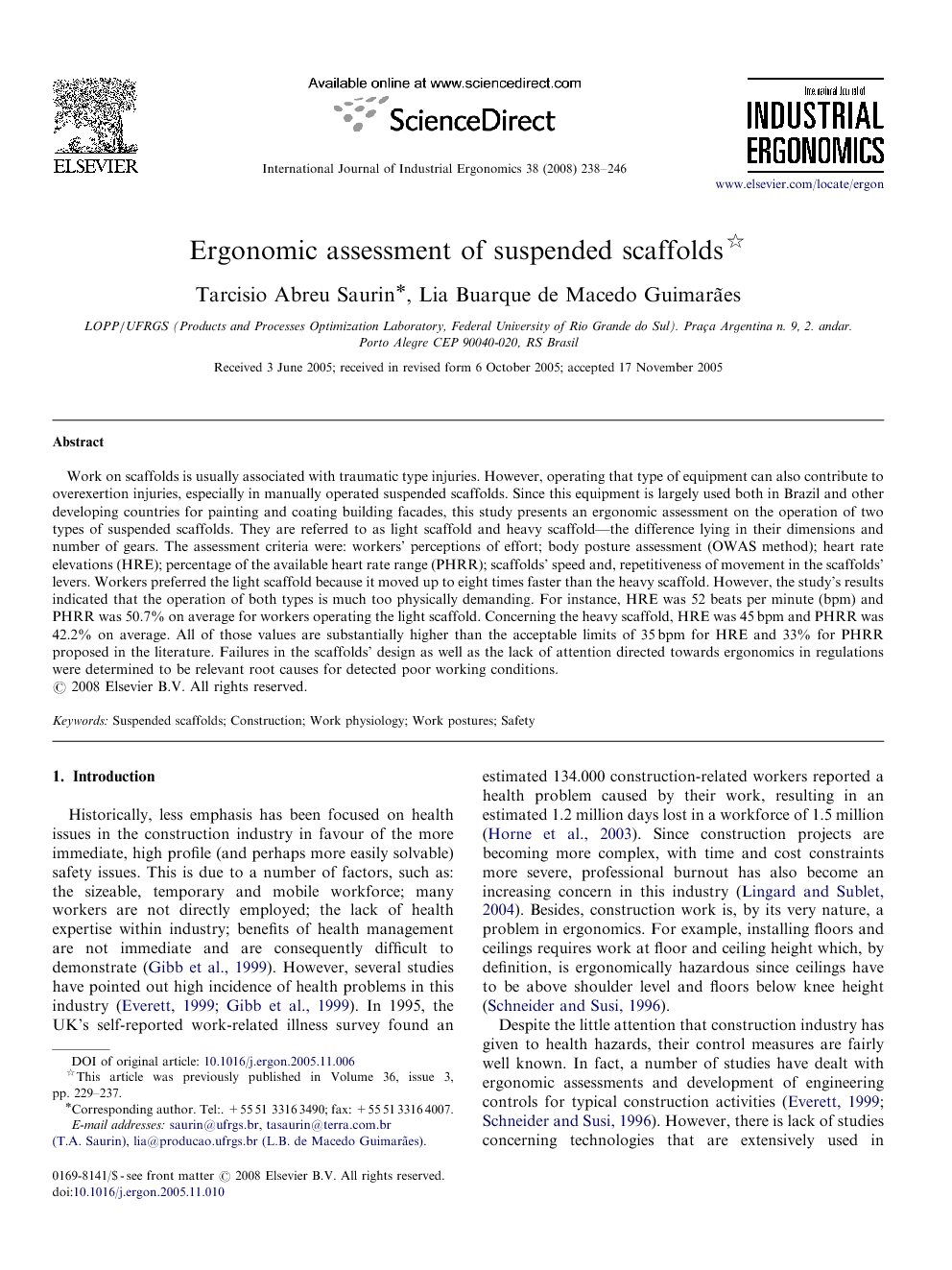 Work on scaffolds is usually associated with traumatic type injuries. However, operating that type of equipment can also contribute to overexertion injuries, especially in manually operated suspended scaffolds. Since this equipment is largely used both in Brazil and other developing countries for painting and coating building facades, this study presents an ergonomic assessment on the operation of two types of suspended scaffolds. They are referred to as light scaffold and heavy scaffold—the difference lying in their dimensions and number of gears. The assessment criteria were: workers’ perceptions of effort; body posture assessment (OWAS method); heart rate elevations (HRE); percentage of the available heart rate range (PHRR); scaffolds’ speed and, repetitiveness of movement in the scaffolds’ levers. Workers preferred the light scaffold because it moved up to eight times faster than the heavy scaffold. However, the study's results indicated that the operation of both types is much too physically demanding. For instance, HRE was 52 beats per minute (bpm) and PHRR was 50.7% on average for workers operating the light scaffold. Concerning the heavy scaffold, HRE was 45 bpm and PHRR was 42.2% on average. All of those values are substantially higher than the acceptable limits of 35 bpm for HRE and 33% for PHRR proposed in the literature. Failures in the scaffolds’ design as well as the lack of attention directed towards ergonomics in regulations were determined to be relevant root causes for detected poor working conditions.

Historically, less emphasis has been focused on health issues in the construction industry in favour of the more immediate, high profile (and perhaps more easily solvable) safety issues. This is due to a number of factors, such as: the sizeable, temporary and mobile workforce; many workers are not directly employed; the lack of health expertise within industry; benefits of health management are not immediate and are consequently difficult to demonstrate (Gibb et al., 1999). However, several studies have pointed out high incidence of health problems in this industry (Everett, 1999; Gibb et al., 1999). In 1995, the UK's self-reported work-related illness survey found an estimated 134.000 construction-related workers reported a health problem caused by their work, resulting in an estimated 1.2 million days lost in a workforce of 1.5 million (Horne et al., 2003). Since construction projects are becoming more complex, with time and cost constraints more severe, professional burnout has also become an increasing concern in this industry (Lingard and Sublet, 2004). Besides, construction work is, by its very nature, a problem in ergonomics. For example, installing floors and ceilings requires work at floor and ceiling height which, by definition, is ergonomically hazardous since ceilings have to be above shoulder level and floors below knee height (Schneider and Susi, 1996). Despite the little attention that construction industry has given to health hazards, their control measures are fairly well known. In fact, a number of studies have dealt with ergonomic assessments and development of engineering controls for typical construction activities (Everett, 1999; Schneider and Susi, 1996). However, there is lack of studies concerning technologies that are extensively used in developing countries. For example, manually operated suspended scaffolds that are largely used in Brazil for painting and coating building facades have not been examined. In Brazil, both powered suspended scaffolds and tower scaffolds are still used at a minor extent, mostly in major construction projects. In the literature review carried out for this study, no references on previous ergonomic assessments of suspended scaffolds were found. However, Cutlip et al. (2000) and Hsiao and Stanevich (1996) carried out biomechanical assessments on assemblage and disassemblage of tower scaffolds. Those studies identified tasks and activities that increased the risk of overexertion injury associated with the erection and dismantling of frame scaffolds. Also, Fang et al. (2004) compared the level of nervousness of workers at bamboo and metal supported scaffolds in Hong Kong. Based on pulse frequencies measurements, they concluded that people are usually more nervous on bamboo tower scaffolding than on metal tower scaffolding. Work on scaffolds, whatever the type, is usually associated with fall hazards. An analysis of approximately 3000 accident reports in Brazilian construction sites carried out by Costella (1999), showed that falls from scaffolds, whatever the type, accounted for nearly half of all serious accidents (46.3% of the total). Because of this high incidence of traumatic injuries of this type, NR-18 (Work Conditions and Environment in the Construction Industry), the main safety regulation related to the construction industry in Brazil, focuses mainly on prescriptive requirements regarding the structural design of scaffolds. Ergonomic issues, not only concerning scaffolds, are not directly dealt with by NR-18 (Saurin et al., 2000). Moreover, suspended scaffolds in Brazil are usually manufactured on site using craft methods. Besides that, they are frequently made of reused material often refused and adapted from other construction equipment (e.g. safeguards such as guardrails might become working platforms in scaffolds). Based on the context described above, it seems necessary to go beyond safety risks and to investigate ergonomic issues associated to the operation of suspended scaffolds. The improvised way that suspended scaffolds are usually manufactured, the fact that their operation is a labor-intensive-task and the absence of ergonomic requirements in NR-18 indicate that relevant ergonomic hazards are likely to exist. Thus, this paper aims to assess the extent to which operating suspended scaffolds is a demanding task as well as to identify the underlying reasons of the detected poor working conditions.

This study presented an ergonomic assessment of the operation of two types of suspended scaffolds (light and heavy) that are largely adopted by building contractors in Brazil. The results show that both types of scaffolds present an inadequate working environment. Moving the suspended scaffolds involves poor body postures, excessive physiological workload and high motion repetitiveness. This conclusion was disappointing for the contractor, since he expected that the light scaffold did not demand too much from the workers. In fact, prior to the study, the contractor intended to substitute all heavy scaffolds for the light ones. Workers’ body postures were classified either in risk categories 3 and 4 (the most hazardous based on the OWAS method) in 37% and 48% of the working time when moving light and heavy scaffolds, respectively. These percentages are slightly lower (19% and 34%) when regular work from scaffolds is considered. The physiological demand was also found to be excessive. Heart rate elevations (HRE) were below the limit of 35 bpm only in two out of the 12 measurements and the percentage of the available heart rate range (PHRR) was below the limit of 33% only in three out of the 12 measurements. Also, the results pointed out that the physiological demand was not reduced below the limits adopted in this study when two workers operated the equipment together. Moreover, the operation of the scaffolds levers was a highly repetitive task. The number of push–pull cycles per minute varied from 23 (lowering heavy scaffold) to 62 (lowering light scaffold) which leads to repetitive movements. Also, both direct observation and workers’ reports indicated that unsafe acts were a commonplace. Unsafe acts, such as climbing over the gears to reach the ideal height to work, can be directly attributed to both safety planning, managerial control failures, and poor scaffold design. This combination pushed workers to carry out most of the violations observed. Even though powered suspended scaffolds have become gradually more common in Brazil, only major contractors have adopted this equipment. For smaller contractors, it can be expected that manually operated suspended scaffolds will continue to be used in Brazilian construction sites for quite some time. Thus, it is necessary that both governments and construction companies take countermeasures to address the poor working conditions on scaffolds. The requirements of NR-18 regulation concerning the design of suspended scaffolds should be reviewed. Structural safety should not lead to overweight, which results in an unacceptable workload for operators. Moreover, ergonomic requirements could be proposed for designing gears and levers, so both awkward postures and physiological demands are minimized. Management failures that generate additional workload and risk to the scaffolds’ operators should be tackled by safety management techniques. For example, as detected in this study, product design should consider the feasibility of installing scaffolds around the whole building facade.