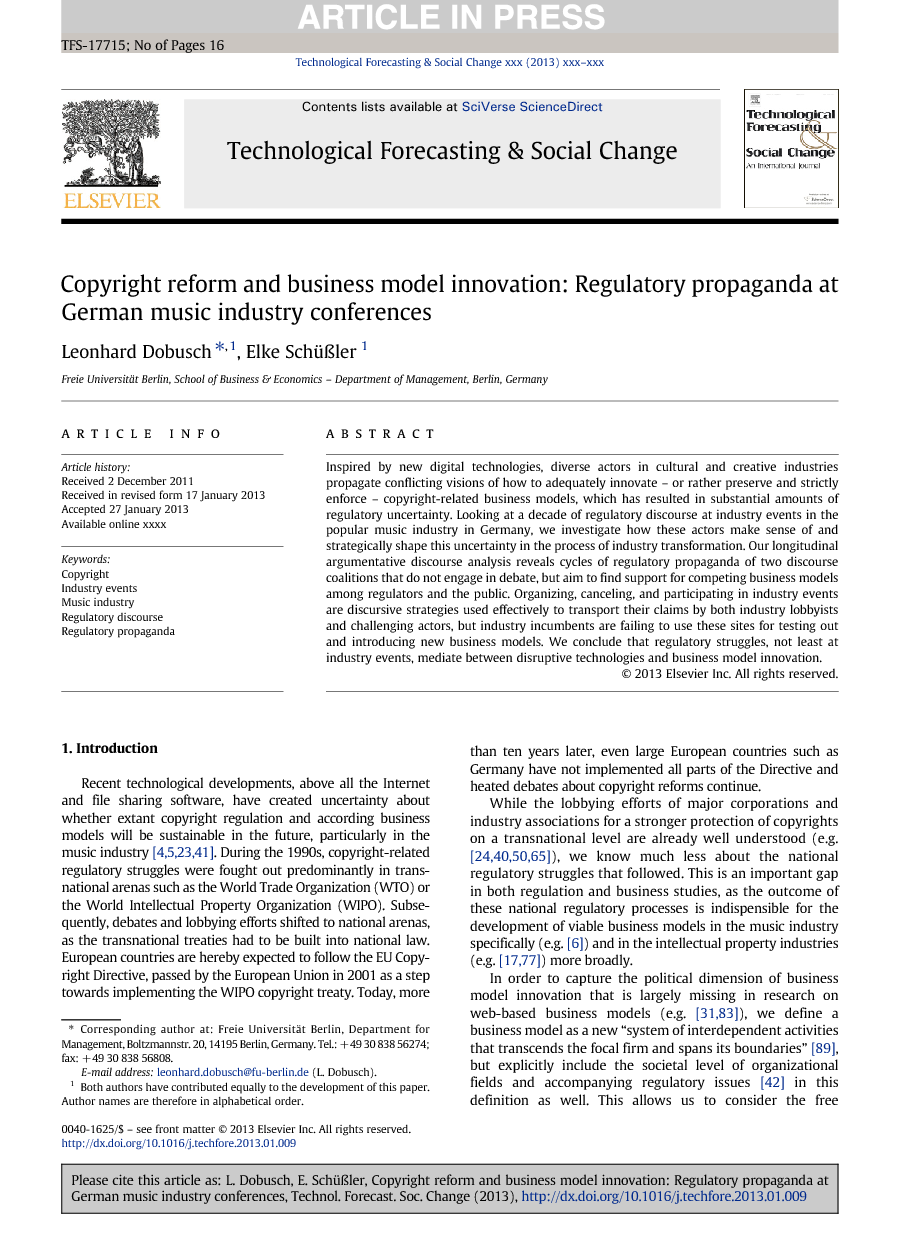 Inspired by new digital technologies, diverse actors in cultural and creative industries propagate conflicting visions of how to adequately innovate – or rather preserve and strictly enforce – copyright-related business models, which has resulted in substantial amounts of regulatory uncertainty. Looking at a decade of regulatory discourse at industry events in the popular music industry in Germany, we investigate how these actors make sense of and strategically shape this uncertainty in the process of industry transformation. Our longitudinal argumentative discourse analysis reveals cycles of regulatory propaganda of two discourse coalitions that do not engage in debate, but aim to find support for competing business models among regulators and the public. Organizing, canceling, and participating in industry events are discursive strategies used effectively to transport their claims by both industry lobbyists and challenging actors, but industry incumbents are failing to use these sites for testing out and introducing new business models. We conclude that regulatory struggles, not least at industry events, mediate between disruptive technologies and business model innovation.

Recent technological developments, above all the Internet and file sharing software, have created uncertainty about whether extant copyright regulation and according business models will be sustainable in the future, particularly in the music industry [4], [5], [23] and [41]. During the 1990s, copyright-related regulatory struggles were fought out predominantly in transnational arenas such as the World Trade Organization (WTO) or the World Intellectual Property Organization (WIPO). Subsequently, debates and lobbying efforts shifted to national arenas, as the transnational treaties had to be built into national law. European countries are hereby expected to follow the EU Copyright Directive, passed by the European Union in 2001 as a step towards implementing the WIPO copyright treaty. Today, more than ten years later, even large European countries such as Germany have not implemented all parts of the Directive and heated debates about copyright reforms continue. While the lobbying efforts of major corporations and industry associations for a stronger protection of copyrights on a transnational level are already well understood (e.g. [24], [40], [50] and [65]), we know much less about the national regulatory struggles that followed. This is an important gap in both regulation and business studies, as the outcome of these national regulatory processes is indispensible for the development of viable business models in the music industry specifically (e.g. [6]) and in the intellectual property industries (e.g. [17] and [77]) more broadly. In order to capture the political dimension of business model innovation that is largely missing in research on web-based business models (e.g. [31] and [83]), we define a business model as a new “system of interdependent activities that transcends the focal firm and spans its boundaries” [89], but explicitly include the societal level of organizational fields and accompanying regulatory issues [42] in this definition as well. This allows us to consider the free provision of cultural goods [55] pursued by an increasing number of actors not necessarily from the music industry, but from the wider field of copyright regulation as an alternative business model in our analysis and provides a bridge to recent studies on social or institutional innovations accompanying the technological ones in processes of industry transformation (e.g. [27] and [51]). Empirically, we follow Hajer's [35] argumentative discourse analytical approach and study the discourse coalitions forming in the German popular music industry around the issue of copyright regulation between 2001 and 2010, the decade after the passing of the EU Copyright Directive. We investigate how different actors make sense of regulation alternatives in the light of old and potential new business models at industry events. Events such as conferences have recently been introduced as discursive spaces in organizational fields where central and peripheral field actors can come together and shape regulatory structures [38]. Convening at industry events may thus be a viable strategy for industry actors facing regulatory uncertainty in processes of industry transformation. In order to elaborate on our understanding of the regulatory and political dimension of business model innovation, we study the discursive struggles among industry incumbents and other field actors unfolding at German music industry events and ask: How do different actors in a transforming industry address regulatory uncertainty in processes of business model innovation? We find, first, that regulatory debate is taking place increasingly at music industry fairs and festivals, venues that have not traditionally hosted conference sections. New events and event formats have been founded to provide discursive spaces for addressing regulatory uncertainty regarding copyright. Second, we find an ebbing and a growing intensity of regulatory debates depending on the perceived success of copyright-related business models over time. The dominant public narrative throughout our ten-year examination period has revolved around the threat posed by Internet file sharing and the call for regulation to protect existing business models, manifested in the lobbying efforts of core music industry actors to legally protect Digital Rights Management (DRM) technologies against circumvention [7] and [76]. As a reaction to these developments, a growing number of organizations and individuals have developed a counter-narrative, in which they depict industry incumbents as part of a problem rather than the solution to any copyright reform efforts. Without the backing of strong corporate support, this challenger coalition consisted (at least initially) mostly of startup companies, small online-only music distributors (“netlabels”, see [30]), non-profit organizations such as Creative Commons [20], dissident or avant-garde artists and, later in the process, the newly founded pirate parties.2By advocating copyright reform and new business models that were compatible with new digital technologies such as peer-to-peer file sharing, these actors resemble social-movement-like market activists, or “market rebels” [70]. Rather than engaging in regulatory conversations [10] and synthesizing new business models, however, the competing incumbent and challenging actor groups directed their claims mainly at the public and regulators. We thus observe cycles of conflicting regulatory propaganda fueled by recurring industry crises within the phases of industry evolution (e.g. [80] and [67]). The outcome of these regulatory struggles may eventually mediate the passing from one stage in the industry life cycle to the next. The remainder of this paper is organized as follows: we introduce our theoretical perspective on business models, regulation, and the discursive spaces provided by industry events. Then we explain in more detail our research setting, the popular music industry in Germany, and outline our methodological approach, methods of data collection, and data analysis. We present our findings on overall changes in the music event landscape as well as the discourse coalitions forming over time before discussing our results on what we call cycles of regulatory propaganda and business model innovation.

Quite in contrast to the proposed crisis of the music industry, we can see a thriving event landscape. At least some of the newly founded events are social-movement like organizations seeking to open up the debate on copyright and to find new solutions and business models. Perhaps not in terms of financial revenues, but in terms of activism, debate, and exchange of ideas, the music industry appears lively. If this can be taken in any way as an indication, then we do not see a cultural decline caused by digital technology, but a challenging debate and a diverse set of practices regarding the use of music in modern cultural production. Building upon our findings, further research could examine whether different kinds of events facilitate different discursive patterns, depending on their mandate, their organizers, and their position in an organizational field. The role of the (non-neutral) arbiter that brings together these separate coalitions is rather taken up by the media, itself veering towards reformist positions. It would be interesting to compare what is actually said at events with the way it is represented by the media in order to enhance our understanding of the role of the media as a non-neutral arbiter and hence as an active member of discourse coalitions. In this context, studying the discursive strategies of different actors at different points in time within different discursive spaces would help to provide a more in-depth understanding of how incumbent-challenger dynamics play out in a transforming industry. For instance, while organizing and canceling events was an effective strategy used by both conservative and reformist actors aiming to mobilize support for certain positions, these strategies are likely to be complemented by direct lobbying efforts or other political activities, such as engaging in transnational regulatory arenas. Since our analysis was focused on Germany, further research could also systematically compare the shape of the evolving event landscapes and discourse coalitions in other countries to see if similar themes or phases can be identified and whether the cyclical dynamic of regulatory debate can be confirmed. Our findings provide a first step towards more nation-based regulation studies, and we hope to have inspired research in this direction. Complementary research on different national regulatory processes, comparing regulatory propaganda across different cultural industries, would help to clarify whether we can see convergence in terms of discourse and business model approaches or whether differences, for example with regard to DRM [26], still persist. These findings could then inform further research on why industry incumbents often fail to envision new forms of value proposition and value capture in the Internet age [83]. Specifically, the complementary interplay of cycles of regulatory uncertainty and propaganda described in this study and the cyclical nature of technological uncertainty [72] and [67] deserve closer investigation. For managers maneuvering businesses through periods of industry transformation, our analysis of regulatory propaganda in the music industry may be informative in at least three respects. First, business model innovation is likely to come from the fringes or even from actors external to the field. Under regulatory uncertainty, these are potential partners for strategic alliances to explore alternative avenues for industry development. Second, not only discourse at existing industry events but also the foundation of new and seemingly less central industry events may have a strong impact on how regulatory discourse unfolds – not least because new events are newsworthy just in themselves and their organizers have an eye towards field evolution. Attending these events may be an important source of fresh ideas for proactively addressing regulatory uncertainty. Third, the intensity of discourse on business model innovation and complementary regulation is likely to be cyclical in nature, depending on the perceived acuteness of an industry crisis. Consequently, industry crisis rather than mere technological developments opens up discursive spaces for introducing new or alternative business models. While departing further from established paths with new business models may be particularly promising in times of crisis, therefore, this also suggests making counter-cyclical investments in business model exploration as a strategy for generating competitive advantages in the medium- and long-run.