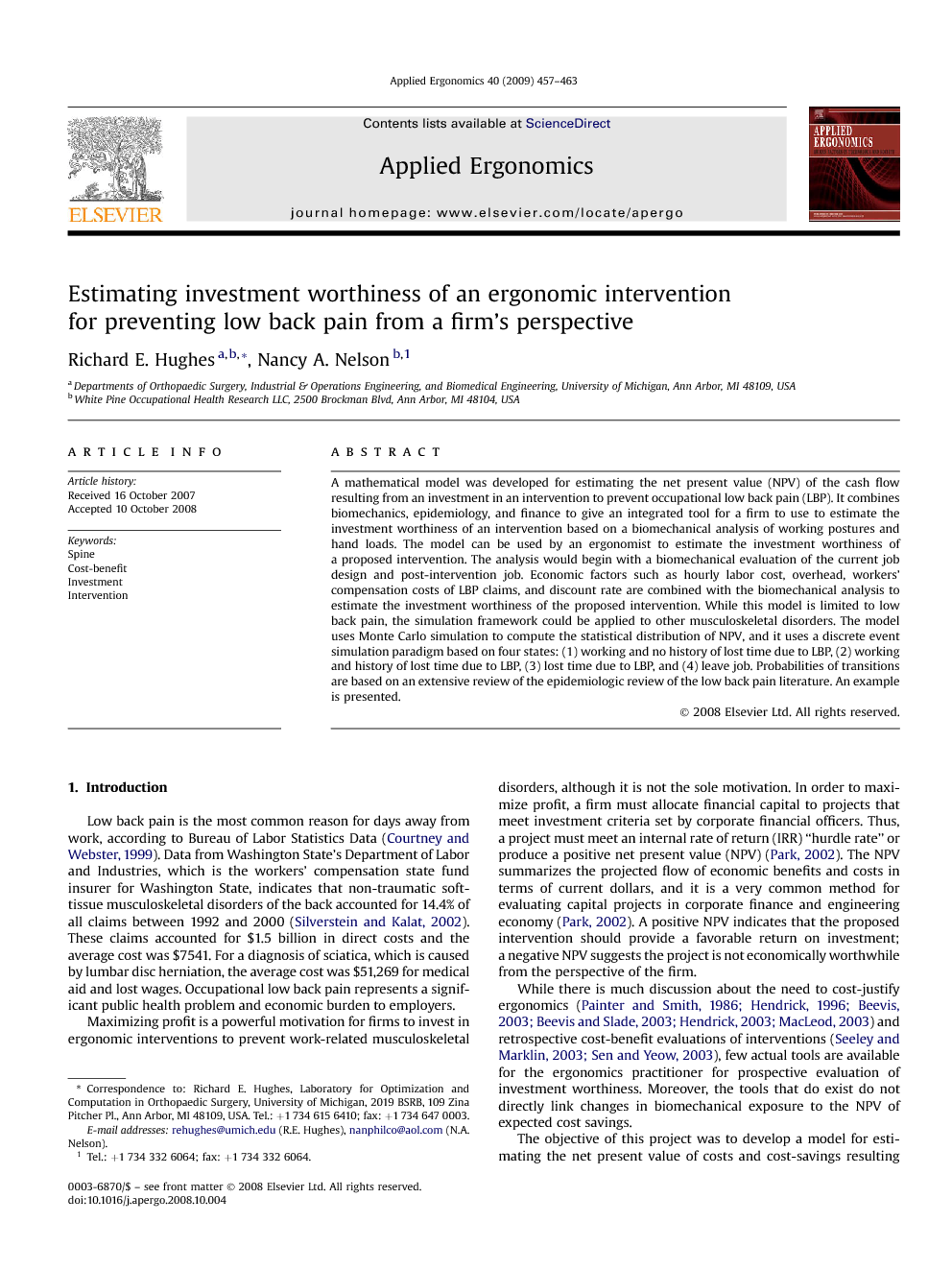 A mathematical model was developed for estimating the net present value (NPV) of the cash flow resulting from an investment in an intervention to prevent occupational low back pain (LBP). It combines biomechanics, epidemiology, and finance to give an integrated tool for a firm to use to estimate the investment worthiness of an intervention based on a biomechanical analysis of working postures and hand loads. The model can be used by an ergonomist to estimate the investment worthiness of a proposed intervention. The analysis would begin with a biomechanical evaluation of the current job design and post-intervention job. Economic factors such as hourly labor cost, overhead, workers' compensation costs of LBP claims, and discount rate are combined with the biomechanical analysis to estimate the investment worthiness of the proposed intervention. While this model is limited to low back pain, the simulation framework could be applied to other musculoskeletal disorders. The model uses Monte Carlo simulation to compute the statistical distribution of NPV, and it uses a discrete event simulation paradigm based on four states: (1) working and no history of lost time due to LBP, (2) working and history of lost time due to LBP, (3) lost time due to LBP, and (4) leave job. Probabilities of transitions are based on an extensive review of the epidemiologic review of the low back pain literature. An example is presented.

Low back pain is the most common reason for days away from work, according to Bureau of Labor Statistics Data (Courtney and Webster, 1999). Data from Washington State's Department of Labor and Industries, which is the workers' compensation state fund insurer for Washington State, indicates that non-traumatic soft-tissue musculoskeletal disorders of the back accounted for 14.4% of all claims between 1992 and 2000 (Silverstein and Kalat, 2002). These claims accounted for $1.5 billion in direct costs and the average cost was $7541. For a diagnosis of sciatica, which is caused by lumbar disc herniation, the average cost was $51,269 for medical aid and lost wages. Occupational low back pain represents a significant public health problem and economic burden to employers. Maximizing profit is a powerful motivation for firms to invest in ergonomic interventions to prevent work-related musculoskeletal disorders, although it is not the sole motivation. In order to maximize profit, a firm must allocate financial capital to projects that meet investment criteria set by corporate financial officers. Thus, a project must meet an internal rate of return (IRR) “hurdle rate” or produce a positive net present value (NPV) (Park, 2002). The NPV summarizes the projected flow of economic benefits and costs in terms of current dollars, and it is a very common method for evaluating capital projects in corporate finance and engineering economy (Park, 2002). A positive NPV indicates that the proposed intervention should provide a favorable return on investment; a negative NPV suggests the project is not economically worthwhile from the perspective of the firm. While there is much discussion about the need to cost-justify ergonomics (Painter and Smith, 1986, Hendrick, 1996, Beevis, 2003, Beevis and Slade, 2003, Hendrick, 2003 and MacLeod, 2003) and retrospective cost-benefit evaluations of interventions (Seeley and Marklin, 2003 and Sen and Yeow, 2003), few actual tools are available for the ergonomics practitioner for prospective evaluation of investment worthiness. Moreover, the tools that do exist do not directly link changes in biomechanical exposure to the NPV of expected cost savings. The objective of this project was to develop a model for estimating the net present value of costs and cost-savings resulting from an investment in an ergonomic intervention that reduces biomechanical stress on the low back. The model can assist occupational ergonomists in justifying ergonomic interventions to management; it will be made available to the ergonomics community as part of the Three-Dimensional Static Strength Prediction Program developed and distributed by the University of Michigan's Center for Ergonomics.

A stochastic model based on epidemiologic data and biomechanical modeling was developed to estimate the net present value of the cash flow over a finite time horizon resulting from an investment in an ergonomic intervention to prevent lifting-related occupational low back pain. The material handling example illustrated how the model can be used to evaluate the investment worthiness of an intervention. While the model is limited to occupational low back pain, the stochastic simulation framework could be applied to other musculoskeletal disorders. The model goes beyond existing cost-benefit methods by synthesizing biomechanics, epidemiology, and finance into one analysis tool. Other methods of cost-justification in ergonomics do not quantitatively link biomechanical job analyses to changes in injury costs. Moreover, the most detailed model yet developed by Oxenburgh (Oxenburgh, 1991 and Oxenburgh et al., 2004) is based on pay-back period as a metric of investment worthiness. Unfortunately for practicing ergonomists who would like to use that model, many firms use NPV or internal rate of return as methods for evaluating capital budgeting decisions and pay-back period is used less often (Graham and Harvey, 2001). Proprietary methods, such the Return on Health, Safety, and Environmental Investments (ROHSEI) software tool developed by ORC Worldwide (Washington, DC, USA), do not include a tool for linking changes in biomechanical stresses on the low back to changes in injury costs. We chose to model NPV using Monte Carlo simulation because some of the most important cost-drivers in the model, such as lost time, are best described using probability distributions. Monte Carlo simulation is a well-accepted method in engineering economics (Park and Sharp-Bette, 1990). We chose to use NPV instead of IRR as the primary metric of investment worthiness because the IRR is not mathematically well behaved when the cash flow changes sign over the planning horizon. Specifically, the IRR can be an irrational number when the cash flow switches from positive to negative multiple times. Using Monte Carlo simulation to model parameters as random variables creates situations where this may occur. Therefore, NPV was selected to avoid the problem of interpreting irrational rates of return. Erector spinae moment arm is a critical parameter in low back models because it is inversely related to spinal compression. Although more recent models have used a larger moment arm, we chose to use a moment arm value that was consistent with what Chaffin used to derive the exposure–injury relationship reported in the 1981 NIOSH Work Practices Guide from his epidemiological study (Chaffin and Park, 1973). At the time Chaffin was conducting the re-analysis of his epidemiological data for NIOSH, his research group was using an erector spinae moment arm value of 5.0 cm for all low back modeling (Chaffin, 1969 and Chaffin and Andersson, 1984). While it would be possible to integrate our approach with many biomechanical models of the low back, it is important to note if the assumed erector spinae moment arm differs from this value. The model has several limitations. It does not include the effects of low back pain for employees who do not file workers' compensation claims, which may include reduced productivity and increased sick leave. The model also limits the use of the four-state transition scheme to labor costs and does not extend it to productivity and quality, which must be modeled using View the MathML sourceBtproduction&quality. A departure from employment with the firm is not broken down into disability claim vs. non-disability claim; a retirement due to permanent LBP disability is modeled as a very prolonged stay in state 3. This infrequent but very costly event is included in the model by the long tail of the Weibull distribution. The range of applications for the model is also limited by the study population studied by Chaffin and Park (1973), which was a manufacturing workforce. Thus, the model is not suitable for studying seating and light work in the office environment. However, the jobs studied by Chaffin and Park (1973) had heavy biomechanical exposures, which suggests that their results should apply to jobs with similar heavy exposures. For example, other occupations with heavy exposures include manufacturing, health care, and construction. We chose to model the investment worthiness of interventions to prevent occupational LBP because LBP is a significant public health problem and cost driver for firms. It is important to recognize, however, that firms invest in ergonomics for many reasons beyond project return-on-investment, including the ethical obligation of providing a safe workplace, regulatory compliance, remaining competitive in the market for talented employees, and collective bargaining. Demonstrating a positive NPV should be viewed as one component of making a successful business case for an ergonomics intervention.