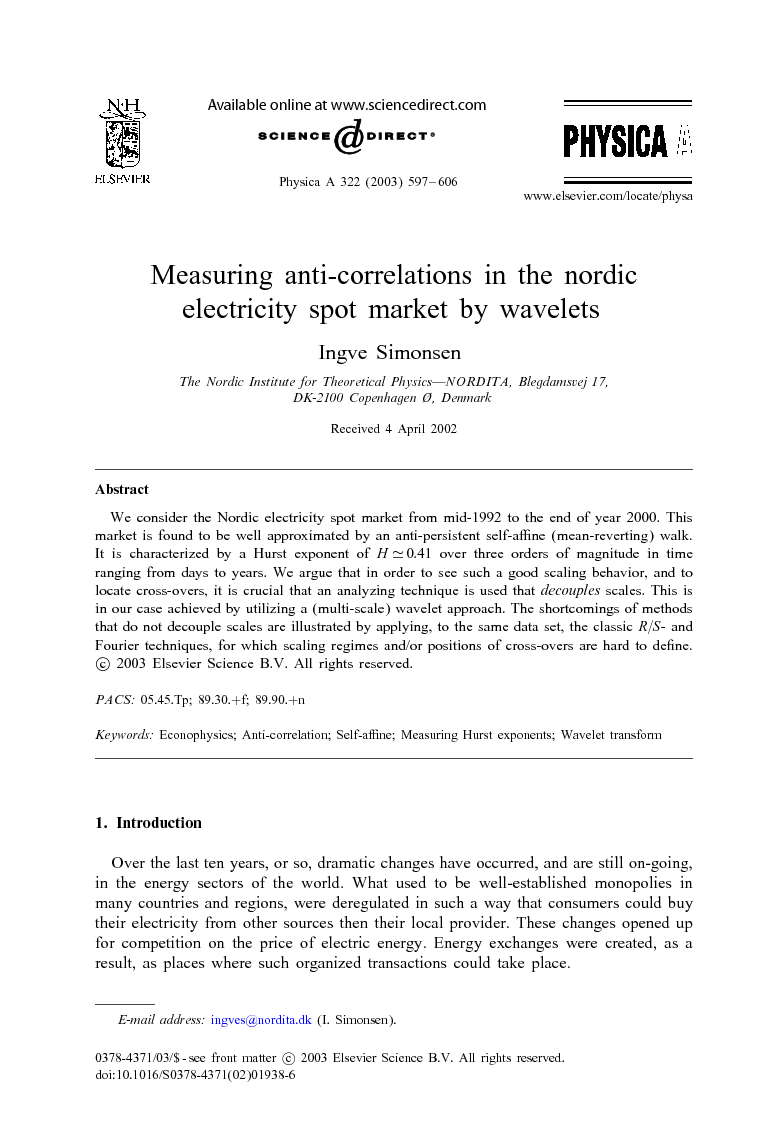 We consider the Nordic electricity spot market from mid-1992 to the end of year 2000. This market is found to be well approximated by an anti-persistent self-affine (mean-reverting) walk. It is characterized by a Hurst exponent of H≃0.41 over three orders of magnitude in time ranging from days to years. We argue that in order to see such a good scaling behavior, and to locate cross-overs, it is crucial that an analyzing technique is used that decouples scales. This is in our case achieved by utilizing a (multi-scale) wavelet approach. The shortcomings of methods that do not decouple scales are illustrated by applying, to the same data set, the classic R/S- and Fourier techniques, for which scaling regimes and/or positions of cross-overs are hard to define.

Over the last ten years, or so, dramatic changes have occurred, and are still on-going, in the energy sectors of the world. What used to be well-established monopolies in many countries and regions, were deregulated in such a way that consumers could buy their electricity from other sources then their local provider. These changes opened up for competition on the price of electric energy. Energy exchanges were created, as a result, as places where such organized transactions could take place. One of the first electricity markets in the world to be deregulated was the Norwegian, that was fully deregulated by 1992. The same year a Norwegian commodity exchange for electric power was established. Here one could trade short and long term electricity contracts in addition to contracts for next-day (View the MathML source) or immediate physical delivery. This market place, which now also includes the other Nordic countries, is today known as NordPool—the Nordic Power Exchange [1]. The next-day electricity market, i.e., where contracts for View the MathML source delivery are traded, is known as the spot market. This market, administrated by NordPool, is open View the MathML source a day 7 days a week all year around, and the (spot) price is fixed for each hour separately. In this market, participants (i.e., the buyers and sellers) tell the market administrator (NordPool) how much, and to what price and at what time they want to sell or buy a given amount of electric power. From these bid and ask data the administrator creates a market cross which sets the spot price for that particular hour. The market cross is obtained by forming the cumulative volume histograms, Vs(p) and Vb(p), that give respectively the total amount of electric energy that sellers (buyers) want to sell (buy) at a price higher (lower) then p. The spot price, S, is then defined as the price at which Vs(S)=Vb(S) (if such a point exists). Thus, the spot price is set such that the total volume of sold and bought electric power is balanced. All sellers asking a price p⩽S, as well as all buyers willing to pay p⩾S will get a transaction at the spot price for that particular hour. In all other cases no transactions will take place. If no market cross can be defined from the bid and ask data, no transactions will take place and the spot price for that particular hour remains unset. Recently, it has been suggested that the electricity spot price process is a so-called mean-reverting process [2] and [3]. Here, the degree of mean-reversion was quantified for the Californian spot power market by measuring its Hurst or roughness exponent by the R/S-analysis [4] and [5]. However, in order to perform this analysis, Weron and Przybyłowicz [2] had to consider the daily average returns instead of the hourly returns. This is due to a shortcoming of the R/S-method when analysing multi-scale time series as we will see explicitly in the discuss below. In this paper, however, we suggest to use another technique—a wavelet based analyzing technique that does not suffer from this shortcoming. The method is demonstrate on data from NordPool—the oldest multi-national power exchange in the world. It is found that the Nordic electricity power market is anti-persistent (mean-reverting), and the (Hurst) exponent characterizing the market is found to be H=0.41±0.02 for time scales ranging from days to years, where the error indicated is the regression error.

We have analyzed the hourly logged spot electricity prices from the Nordic electricity power market over a eight and a half years period starting in mid 1992. It is found that the spot price process is an anti-persistent self-affine walk (mean-reverting stochastic process) over at least three orders of magnitude in time ranging from days to years. Hence the increments in the spot price process are anti-correlated over the same time scales. The Hurst exponent that characterize this scaling behavior was measured by a wavelet technique and found to be H=0.41±0.02, where the error bar is a pure regression error. We also commented on other classical methods of measuring such exponents and stressed and showed that it is important to use methods that decouple scales when multi-scale time series are being analyzed.