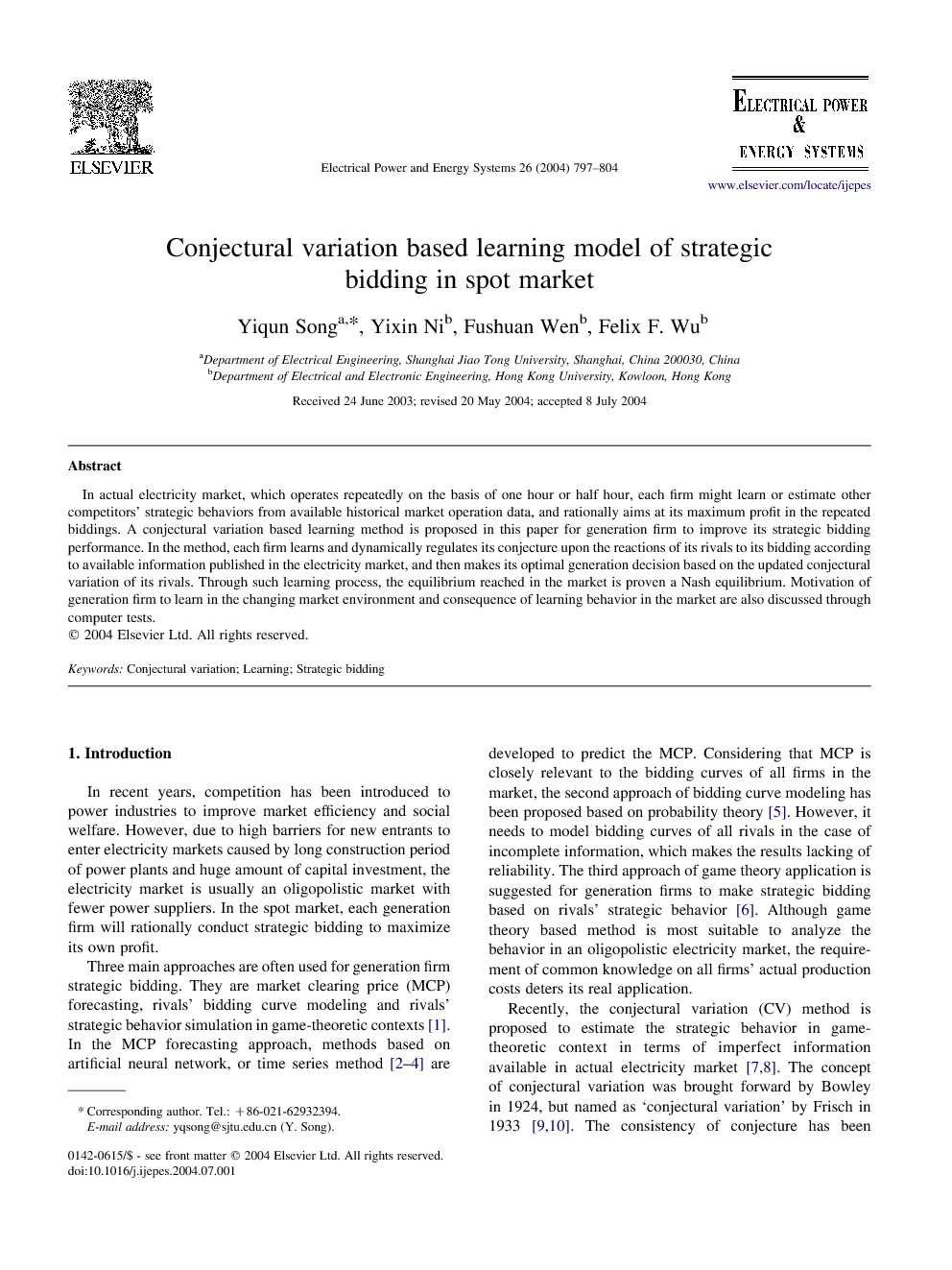 In actual electricity market, which operates repeatedly on the basis of one hour or half hour, each firm might learn or estimate other competitors' strategic behaviors from available historical market operation data, and rationally aims at its maximum profit in the repeated biddings. A conjectural variation based learning method is proposed in this paper for generation firm to improve its strategic bidding performance. In the method, each firm learns and dynamically regulates its conjecture upon the reactions of its rivals to its bidding according to available information published in the electricity market, and then makes its optimal generation decision based on the updated conjectural variation of its rivals. Through such learning process, the equilibrium reached in the market is proven a Nash equilibrium. Motivation of generation firm to learn in the changing market environment and consequence of learning behavior in the market are also discussed through computer tests.

In recent years, competition has been introduced to power industries to improve market efficiency and social welfare. However, due to high barriers for new entrants to enter electricity markets caused by long construction period of power plants and huge amount of capital investment, the electricity market is usually an oligopolistic market with fewer power suppliers. In the spot market, each generation firm will rationally conduct strategic bidding to maximize its own profit. Three main approaches are often used for generation firm strategic bidding. They are market clearing price (MCP) forecasting, rivals' bidding curve modeling and rivals' strategic behavior simulation in game-theoretic contexts [1]. In the MCP forecasting approach, methods based on artificial neural network, or time series method [2], [3] and [4] are developed to predict the MCP. Considering that MCP is closely relevant to the bidding curves of all firms in the market, the second approach of bidding curve modeling has been proposed based on probability theory [5]. However, it needs to model bidding curves of all rivals in the case of incomplete information, which makes the results lacking of reliability. The third approach of game theory application is suggested for generation firms to make strategic bidding based on rivals' strategic behavior [6]. Although game theory based method is most suitable to analyze the behavior in an oligopolistic electricity market, the requirement of common knowledge on all firms' actual production costs deters its real application. Recently, the conjectural variation (CV) method is proposed to estimate the strategic behavior in game-theoretic context in terms of imperfect information available in actual electricity market [7] and [8]. The concept of conjectural variation was brought forward by Bowley in 1924, but named as ‘conjectural variation’ by Frisch in 1933 [9] and [10]. The consistency of conjecture has been discussed by economists in [10], [11] and [12] to show the dynamic characteristics of CV. The method can easily model a market with different players, such as leaders, followers, and price takers. In conjectural variation model each firm in an oligopolistic market rationally maximizes its own profit while taking account of the reactions of its competitors. The conjectural supply function is proposed to simulate the Spain electricity market effectively in Ref. [7], and in Ref. [8] it is applied to simulate the E & W market using linear dc network. However, the previous work on CV has some limitations, which remains in a static framework and requires individual firm to make conjectures upon its rivals' cost functions parameters [8]. Since the conjecture of each firm usually differs from the actual response of its rivals, it will lead the firm to earn less profit. In authors' previous paper [13], it is shown that in the spot electricity market, numerous Nash equilibria exist, which correspond to different CV sets taken by GenCos. Till now there is no answer to the question of ‘which CV set is likely to be reached in a spot market after repeated biddings’ because of its dynamic nature. In this paper, a dynamic CV based learning method is suggested for generation firms to improve their strategic bidding behaviors in a spot market. In the method, each firm forms conjecture upon the reactions of its rivals to its bidding according to available information published in the electricity market, and then makes its optimal generation decision based on the conjectural variation of its rivals. It is shown that the equilibrium reached through the suggested learning process will be a Nash equilibrium. Computer test cases are used to illustrate that individual firms have motivations to conduct learning; learning of all firms will decrease the clearing price of spot markets and improve the social welfare in oligopolistic electricity markets; and the elasticity of demand has positive impacts on the convergence of learning process. The paper is arranged as follows. Section 2 presents math formulation of CV based dynamic learning and the proof that CV based learning will lead to a Nash equilibrium. Section 3 is the results of computer test cases, which show clearly the effectiveness of the method; the benefits of CV based learning and the impacts of load elasticity on CV based learning. The conclusion is drawn in Section 4.

In this paper, the dynamic conjectural variation based learning method is suggested for generation firms' strategic bidding in an oligopolistic spot market. It is shown that the learning process will lead to a Nash equilibrium; generation firms have incentives to learn according to the available information published in the actual electricity markets; the MCP will decrease and the social welfare will be improved after generation firms conduct learning; the demand elasticity has positive impacts on the convergence of the learning process. The effectiveness of the proposed method is also shown through computer test cases. It is pointed out that the convergence of CV based learning process in a multi-firm spot market should be improved in the future.