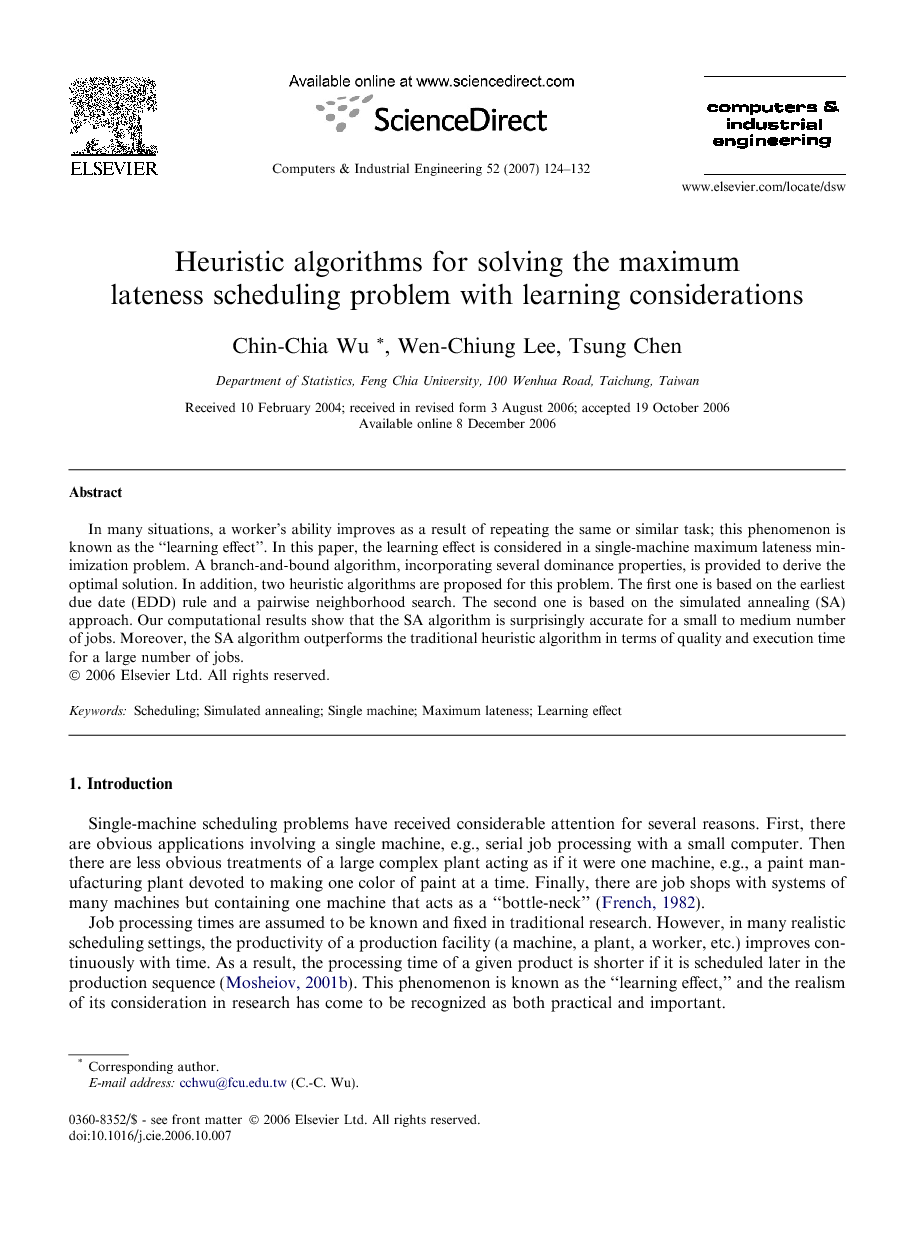 In many situations, a worker’s ability improves as a result of repeating the same or similar task; this phenomenon is known as the “learning effect”. In this paper, the learning effect is considered in a single-machine maximum lateness minimization problem. A branch-and-bound algorithm, incorporating several dominance properties, is provided to derive the optimal solution. In addition, two heuristic algorithms are proposed for this problem. The first one is based on the earliest due date (EDD) rule and a pairwise neighborhood search. The second one is based on the simulated annealing (SA) approach. Our computational results show that the SA algorithm is surprisingly accurate for a small to medium number of jobs. Moreover, the SA algorithm outperforms the traditional heuristic algorithm in terms of quality and execution time for a large number of jobs.

Single-machine scheduling problems have received considerable attention for several reasons. First, there are obvious applications involving a single machine, e.g., serial job processing with a small computer. Then there are less obvious treatments of a large complex plant acting as if it were one machine, e.g., a paint manufacturing plant devoted to making one color of paint at a time. Finally, there are job shops with systems of many machines but containing one machine that acts as a “bottle-neck” (French, 1982). Job processing times are assumed to be known and fixed in traditional research. However, in many realistic scheduling settings, the productivity of a production facility (a machine, a plant, a worker, etc.) improves continuously with time. As a result, the processing time of a given product is shorter if it is scheduled later in the production sequence (Mosheiov, 2001b). This phenomenon is known as the “learning effect,” and the realism of its consideration in research has come to be recognized as both practical and important. The impact of learning on productivity in manufacturing was first found by Wright (1936) in the aircraft industry and was subsequently discovered in many industries in both manufacturing and service sectors (Yelle, 1979). Numerous studies have been devoted to investigating the learning effect over a variety of industrial fields, but its research is still very limited in the scheduling field. Biskup (1999) considered a model that assumed the time needed to perform an operation decreases as a function of the number of repetitions and showed that three important single-machine problems remain polynomial solvable, namely, minimizing the flow time, minimizing the sum of job completion times, and minimizing the weighted sum of completion time deviations from a common due date. Mosheiov (2001a) gave several examples to demonstrate that the optimal schedule may be very different from that of the classical version of the problem when the learning effect is considered. In particular, he presented a counterexample to show that the EDD rule might not provide the optimal solution for the single-machine maximum lateness problem. However, the complexity of this problem remains open. Mosheiov and Sidney (2003) extended the study to the case of job-dependent learning curves, that is, when learning associated with some jobs is faster than that with others. They showed that the problems of makespan and total flow time minimization on a single machine, a due-date assignment problem, and total flow time minimization on unrelated parallel machines remain polynomial solvable. Apart from these articles, there are other approaches involving decreasing processing times that are similar to the concept of learning. (See Meilijson and Tamir, 1984, Dondeti and Mohanty, 1995, Dondeti and Mohanty, 1998, Gawiejnowicz, 1996 and Cheng and Wang, 2000.) The problem can be formulated as follows. There is a set of n jobs that are available at time zero. Each job i has a normal processing time ti and due date di. The actual processing time of job i is tira if it is scheduled in position r in a sequence, where a is the learning effect. For a given schedule S, the lateness of job i in S is defined as Li(S)=Ci(S)-di,Li(S)=Ci(S)-di, where Ci(S) denotes the completion time of job i in S. Thus, the problem is to determine a schedule that minimizes the maximum lateness View the MathML sourceLmax(S)=max1⩽i⩽n{Li(S)}. This paper is organized as follows: an exact solution procedure incorporating several dominance properties is presented in the next section. A heuristic algorithm based on EDD is derived in Section 3. A simulated annealing algorithm and the implementation details for the problem are described in Section 4. The simulation experiment and its results are provided in Section 5. Conclusions are presented in the last section.

In this study, the learning effect is taken into consideration for the single-machine maximum lateness scheduling problem. Although the complexity of this problem remains open, the EDD rule and two proposed heuristic algorithms are tested. One is based on the EDD rule and some traditional pairwise improvement moves, and the other is the increasingly popular SA method. It is found that the optimal EDD rule for the traditional problem no longer provides the exact solution but actually strays significantly from the optimal schedule most of the time, as shown by the computational experiment. The performance of the SA algorithm is clearly superior. It outperforms the traditional heuristic algorithm in terms of accuracy for small to medium-sized problems. Moreover, the SA algorithm outperforms the other heuristic in terms of solution quality and consistency of execution time for large problem sizes.