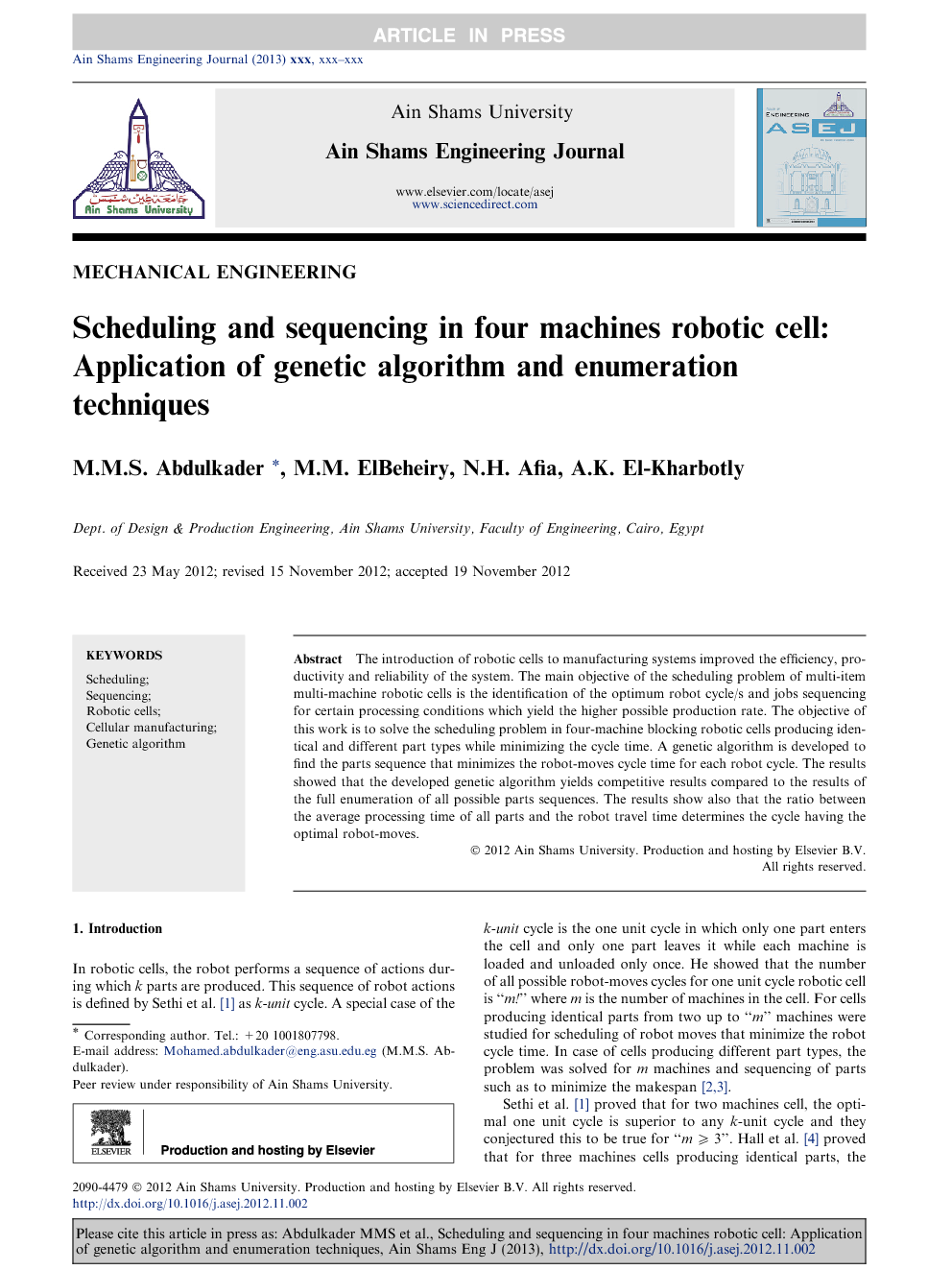 The introduction of robotic cells to manufacturing systems improved the efficiency, productivity and reliability of the system. The main objective of the scheduling problem of multi-item multi-machine robotic cells is the identification of the optimum robot cycle/s and jobs sequencing for certain processing conditions which yield the higher possible production rate. The objective of this work is to solve the scheduling problem in four-machine blocking robotic cells producing identical and different part types while minimizing the cycle time. A genetic algorithm is developed to find the parts sequence that minimizes the robot-moves cycle time for each robot cycle. The results showed that the developed genetic algorithm yields competitive results compared to the results of the full enumeration of all possible parts sequences. The results show also that the ratio between the average processing time of all parts and the robot travel time determines the cycle having the optimal robot-moves.

A genetic algorithm was developed and used to solve the problem of scheduling robot moves and jobs sequencing in four-machines blocking robotic cells producing identical or different jobs to minimize the cycle time. The developed GA was tested against the full enumeration procedure and showed high performance in solving the problem. Enumeration was efficient only in scheduling small size problems incorporating a limited number of jobs in a four machine robotic cell. As the number of jobs increases, enumeration fails to reach a solution. On the other hand, GA proved to be efficient in solving problems with large number of parts in considerably short time, whether the problems are unconstrained or constrained (MPS) and with identical or non-identical parts in four machines robotic cells. The ratio between the mean processing time and robot travel time plays major role in determining which robot cycle has the minimum cycle time. In general, cycle #24 gives the minimum cycle time for values of (tp/tt) higher than 5 which agree with previous research in the field. Although cycle #9 yielded optimal cycle time in the same range of (tp/tt), cycle #24 is most dominant. For lower values of (tp/tt), other cycles show better cycle times. Among these cycles are cycles number 11, 19, 13, and 21. It was shown that cycle #21 is superior to other cycles for (tp/tt) in the range between 1.02 and 5. Cycle #1 is the optimum robot cycle and superior to other cycles for low ratios of (tp/tt) lower than 0.95. The cycle/s that yields the optimum robot cycle time are independent of the number of jobs being processed. Although more than one cycle may give the minimum robot cycle time, the best cycle is determined based on the robot utilization, the smaller the utilization the better the cycle. Also robot utilization determines the optimum robot cycle(s) when all cycles are process dominant.