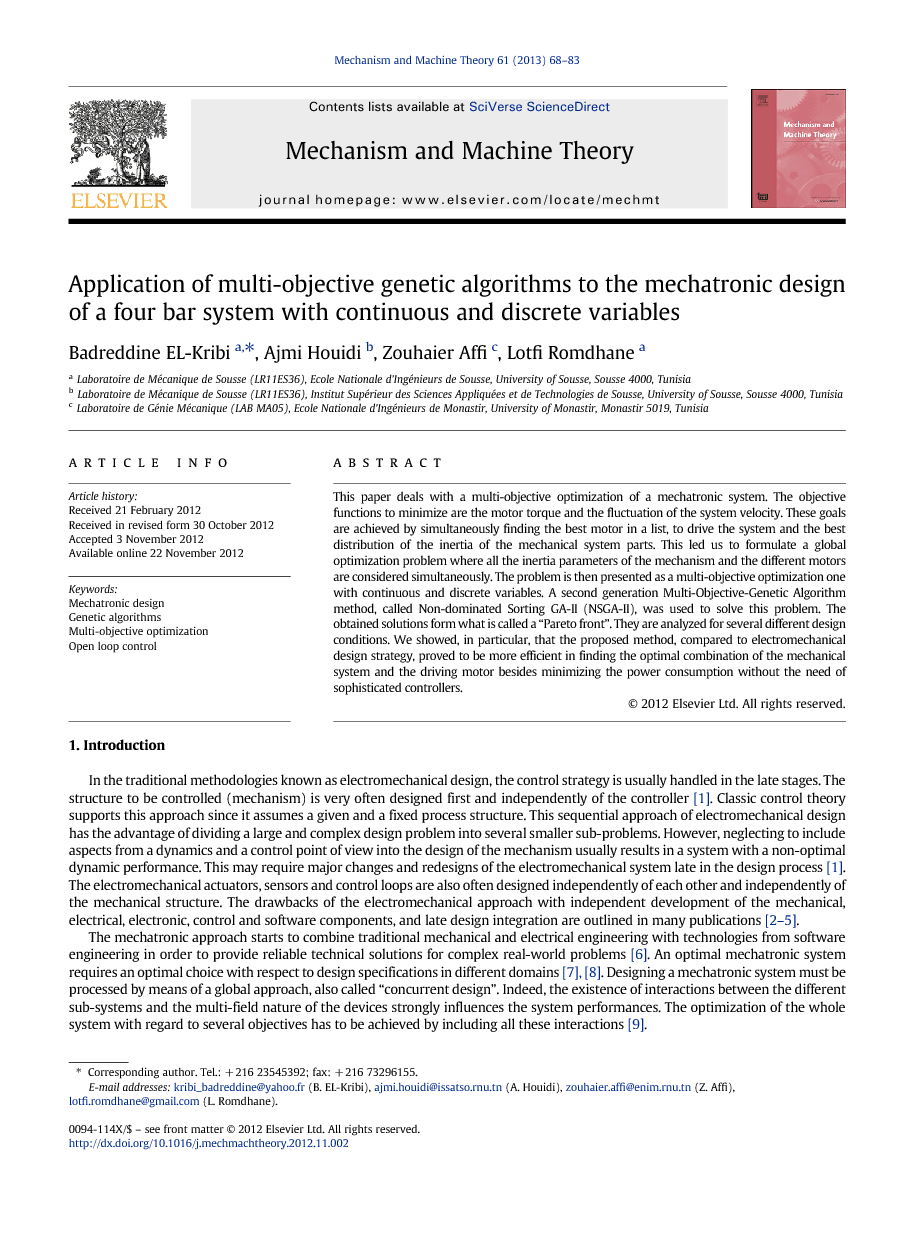 This paper deals with a multi-objective optimization of a mechatronic system. The objective functions to minimize are the motor torque and the fluctuation of the system velocity. These goals are achieved by simultaneously finding the best motor in a list, to drive the system and the best distribution of the inertia of the mechanical system parts. This led us to formulate a global optimization problem where all the inertia parameters of the mechanism and the different motors are considered simultaneously. The problem is then presented as a multi-objective optimization one with continuous and discrete variables. A second generation Multi-Objective-Genetic Algorithm method, called Non-dominated Sorting GA-II (NSGA-II), was used to solve this problem. The obtained solutions form what is called a “Pareto front”. They are analyzed for several different design conditions. We showed, in particular, that the proposed method, compared to electromechanical design strategy, proved to be more efficient in finding the optimal combination of the mechanical system and the driving motor besides minimizing the power consumption without the need of sophisticated controllers.

In the traditional methodologies known as electromechanical design, the control strategy is usually handled in the late stages. The structure to be controlled (mechanism) is very often designed first and independently of the controller [1]. Classic control theory supports this approach since it assumes a given and a fixed process structure. This sequential approach of electromechanical design has the advantage of dividing a large and complex design problem into several smaller sub-problems. However, neglecting to include aspects from a dynamics and a control point of view into the design of the mechanism usually results in a system with a non-optimal dynamic performance. This may require major changes and redesigns of the electromechanical system late in the design process [1]. The electromechanical actuators, sensors and control loops are also often designed independently of each other and independently of the mechanical structure. The drawbacks of the electromechanical approach with independent development of the mechanical, electrical, electronic, control and software components, and late design integration are outlined in many publications [2], [3], [4] and [5]. The mechatronic approach starts to combine traditional mechanical and electrical engineering with technologies from software engineering in order to provide reliable technical solutions for complex real-world problems [6]. An optimal mechatronic system requires an optimal choice with respect to design specifications in different domains [7] and [8]. Designing a mechatronic system must be processed by means of a global approach, also called “concurrent design”. Indeed, the existence of interactions between the different sub-systems and the multi-field nature of the devices strongly influences the system performances. The optimization of the whole system with regard to several objectives has to be achieved by including all these interactions [9]. Li et al. [1] developed a concurrent framework for a mechatronic design, called Design For Control (DFC). The considered objective was to facilitate the controller design, expressed as a reduction of the shaking force/moment of the actuators. Seo et al. [10] integrated genetic programming (GP) and bond graph modeling (BG) in a mechatronic systems design. They studied specifically the mechanical part of the mechatronic system and the controller was designed at a later stage. Affi et al. [11] have shown the advantages of the simultaneous approach over the sequential one when designing a mechatronic system. The geometry and the dynamics are taken separately in a sequential approach and then simultaneously in the global one. They demonstrated the advantages of a multi-objective optimization approach over the single-objective one. Several other authors proposed methods and criteria to select the drive motor for mechatronic applications [12], [13], [14] and [15]. Fathy et al. [14] identified four different strategies for integrated optimization of physical systems and controllers: Sequential, Iterative, Nested and Simultaneous. The two first ones represent strategies that have only the potential of finding designs that are optimal within each domain, but sub-optimal on the system level. The two other methods can find, from a system perspective, the optimal design. A meta-model based method was proposed by Y. Cao et al. [16]. They studied mechatronic system behavior modeling where bi-direction model exchange between SysML and Simulink was proposed based on a triple graph grammar. However, most of the existing literature about the design of mechatronic systems did not include the type of drive motor as a design variable. In this paper, we will present a global optimization of the mechanical system including the choice of the best-suited drive motor. This leads us to a multi-objective optimization with continuous and discrete variables, which will be solved using a Multi-objective genetic algorithm method. The objective functions are the minimization of the required torque to drive the system with the low fluctuations of the input velocity. These goals will be achieved by a better redistribution of the inertia parameters of the mechanical system parts and the choice of the best-suited DC motor out of an existing list of drive motors. In this paper, we will find the best combination (driving motor)–(mechanical system) in order to minimize the required peak torque and the fluctuation of the input crank velocity. The idea is to design a mechatronic system with very low speed fluctuations without the need of a closed loop controller. The paper will be structured as follows: in Section 2, we present the problem formulation in a general way. Section 3 describes the electromechanical approach of modeling of the mechanism and the driving motor. Section 4 contains an electromechanical design of the four-bar–motor system. In this section we will discuss the effect of maximizing the effective inertia on the open loop system response. In Section 5, a mechatronic model of the whole system is presented where we couple mechanical and dynamic parameters of the mechanical part with those of the driving motor. Multi-objective optimization and objective functions definitions are presented in Section 6. The results of this modeling are then presented in Section 7, where they are compared to the results found in the bibliography. The paper ends with some concluding remarks.

In this paper, a concurrent design of a mechatronic system is presented. A multi-objective optimization using the GA with continuous and discrete variables was conducted. The objective functions are the minimization of the motor's torque and the minimization of the fluctuation of the input velocity. These goals have been achieved by a better redistribution of the dynamic parameters of the mechanical system and the choice of the best suited DC drive motor. Moreover, we showed that the proposed method proved to be efficient in finding the optimal combination of the mechanical system and the driving motor. This method can be applied early in the design process to obtain a system with high dynamic performances, i.e., minimum power consumption and minimum velocity fluctuation, without the need of a sophisticated controller. Moreover, this approach improves the search of optimal mechatronic systems using continuous and discrete variables. It can easily be extended to more complex mechanisms such as planar parallel manipulators.