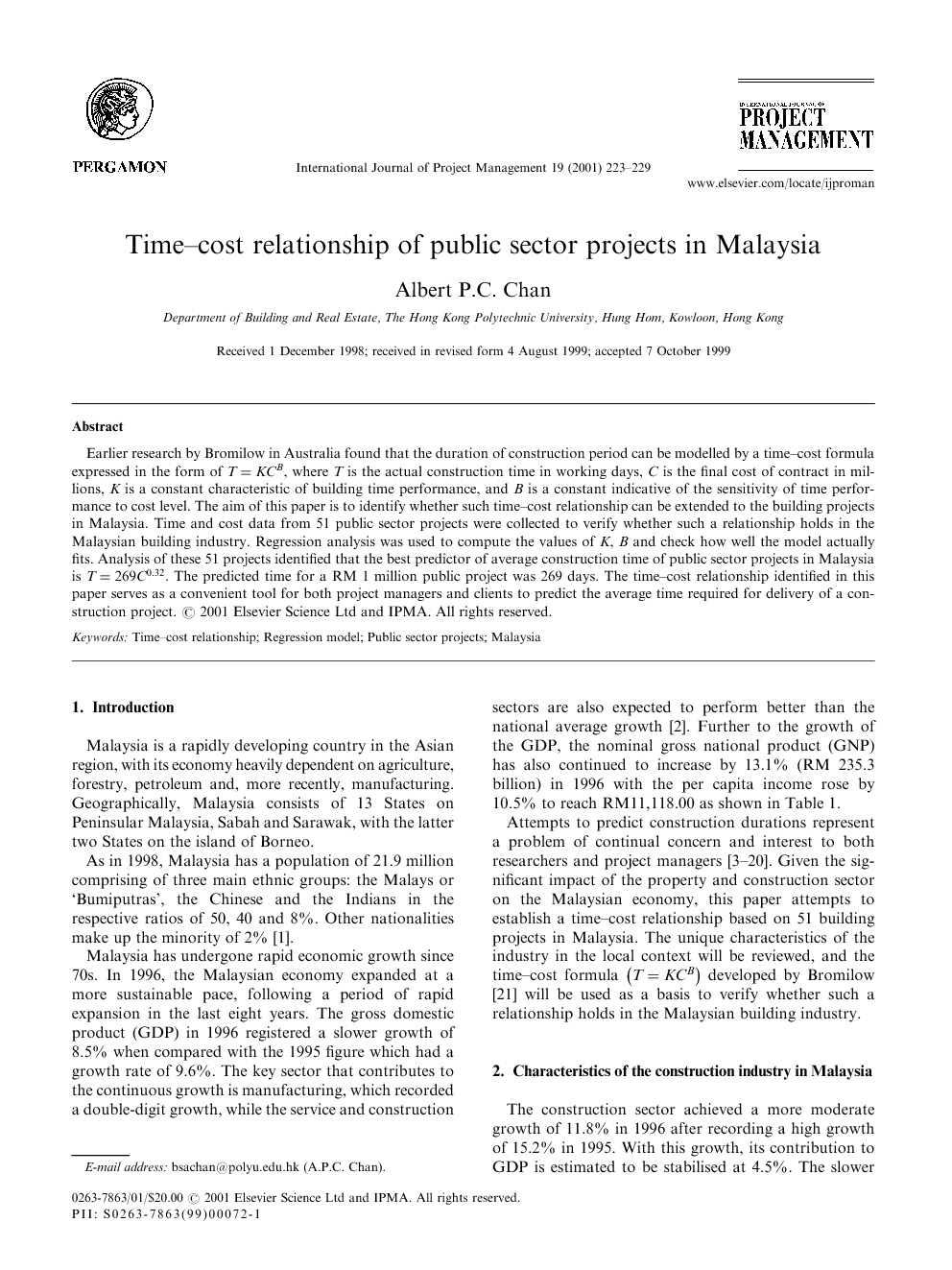 Earlier research by Bromilow in Australia found that the duration of construction period can be modelled by a time–cost formula expressed in the form of T=KCB, where T is the actual construction time in working days, C is the final cost of contract in millions, K is a constant characteristic of building time performance, and B is a constant indicative of the sensitivity of time performance to cost level. The aim of this paper is to identify whether such time–cost relationship can be extended to the building projects in Malaysia. Time and cost data from 51 public sector projects were collected to verify whether such a relationship holds in the Malaysian building industry. Regression analysis was used to compute the values of K, B and check how well the model actually fits. Analysis of these 51 projects identified that the best predictor of average construction time of public sector projects in Malaysia is T=269C0.32. The predicted time for a RM 1 million public project was 269 days. The time–cost relationship identified in this paper serves as a convenient tool for both project managers and clients to predict the average time required for delivery of a construction project.

Malaysia is a rapidly developing country in the Asian region, with its economy heavily dependent on agriculture, forestry, petroleum and, more recently, manufacturing. Geographically, Malaysia consists of 13 States on Peninsular Malaysia, Sabah and Sarawak, with the latter two States on the island of Borneo. As in 1998, Malaysia has a population of 21.9 million comprising of three main ethnic groups: the Malays or ‘Bumiputras’, the Chinese and the Indians in the respective ratios of 50, 40 and 8%. Other nationalities make up the minority of 2% [1]. Malaysia has undergone rapid economic growth since 70s. In 1996, the Malaysian economy expanded at a more sustainable pace, following a period of rapid expansion in the last eight years. The gross domestic product (GDP) in 1996 registered a slower growth of 8.5% when compared with the 1995 figure which had a growth rate of 9.6%. The key sector that contributes to the continuous growth is manufacturing, which recorded a double-digit growth, while the service and construction sectors are also expected to perform better than the national average growth [2]. Further to the growth of the GDP, the nominal gross national product (GNP) has also continued to increase by 13.1% (RM 235.3 billion) in 1996 with the per capita income rose by 10.5% to reach RM11,118.00 as shown in Table 1.Attempts to predict construction durations represent a problem of continual concern and interest to both researchers and project managers [3], [4], [5], [6], [7], [8], [9], [10], [11], [12], [13], [14], [15], [16], [17], [18], [19] and [20]. Given the significant impact of the property and construction sector on the Malaysian economy, this paper attempts to establish a time–cost relationship based on 51 building projects in Malaysia. The unique characteristics of the industry in the local context will be reviewed, and the time–cost formula View the MathML source developed by Bromilow [21] will be used as a basis to verify whether such a relationship holds in the Malaysian building industry.

The main objective of this paper is to investigate the time–cost relationship for the building projects in Malaysia based on Bromilow’s model. The unique characteristics of the Malaysian building industry and the various models to predict construction times for building projects were reviewed. Analysis of 51 public sector projects in Malaysia has confirmed that the contract time and cost has a relationship in the form of T=KCB. The best predictor of average construction time of public sector projects in Malaysia is T=269C0.32. The study concludes that the Malaysian public sector takes 269 days to complete a project with a contract sum of RM 1 million. The time–cost relationship identified in this research serves as a convenient and useful tool for project managers and clients to predict the reasonable time required for the delivery of a construction project. The derived time–cost relationship, expressed in the form of T=KCB, provides an alternative and objective method of estimating construction time to supplement the current practice of estimation largely based on the individual project manager’s experience. The identified equations also provide an important benchmark for future research to study the time performance of public building projects in Malaysia and facilitate international comparison of time performance.