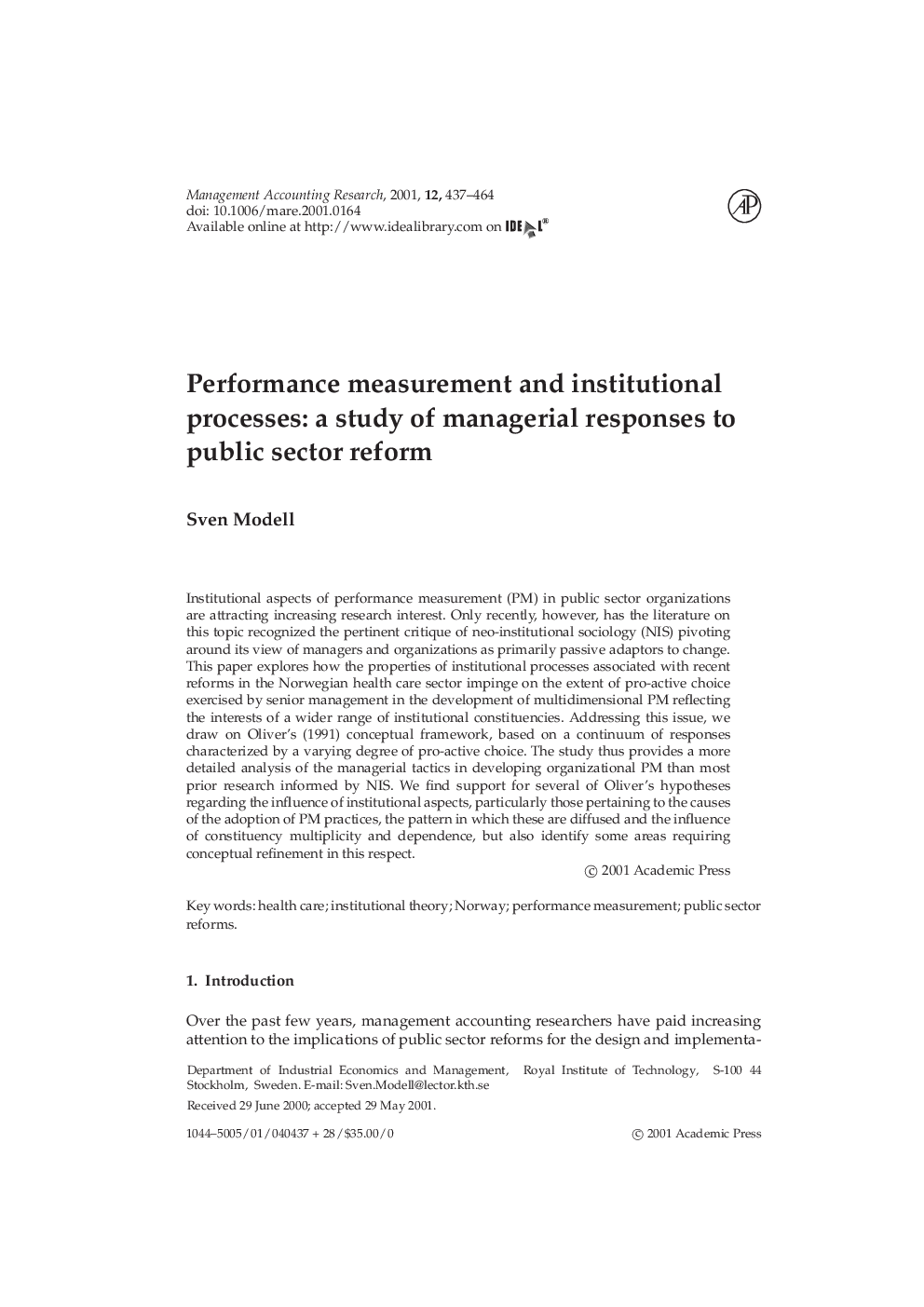 Institutional aspects of performance measurement (PM) in public sector organizations are attracting increasing research interest. Only recently, however, has the literature on this topic recognized the pertinent critique of neo-institutional sociology (NIS) pivoting around its view of managers and organizations as primarily passive adaptors to change. This paper explores how the properties of institutional processes associated with recent reforms in the Norwegian health care sector impinge on the extent of pro-active choice exercised by senior management in the development of multidimensional PM reflecting the interests of a wider range of institutional constituencies. Addressing this issue, we draw on Oliver’s (1991) conceptual framework, based on a continuum of responses characterized by a varying degree of pro-active choice. The study thus provides a more detailed analysis of the managerial tactics in developing organizational PM than most prior research informed by NIS. We find support for several of Oliver’s hypotheses regarding the influence of institutional aspects, particularly those pertaining to the causes of the adoption of PM practices, the pattern in which these are diffused and the influence of constituency multiplicity and dependence, but also identify some areas requiring conceptual refinement in this respect.

Over the past few years, management accounting researchers have paid increasing attention to the implications of public sector reforms for the design and implementa-tion of systems for performance measurement (PM) (e.g. Lapsley and Mitchell, 1996;Ballantine et al., 1998; Modell, 1998; Johnsen, 1999; Kloot and Martin, 2000). Severalauthors have proposed a multidimensional approach to PM, reflecting the interestsof a broader range of stakeholder interests, as a means of widening the conception ofpublic sector performance from financial, efficiency-based measures (Mayston, 1985;Pollitt, 1986; Brignall, 1993; Ballantine et al., 1998; Kloot and Martin, 2000). Muchof this research has been informed by a functionalistic perspective where improvedmeasurement and information systems are regarded as pivotal for assisting managersin making better informed trade-offs and thus balancing more or less conflictingstakeholder interests in the overall control of organizations. More recently, however,the considerable problems in achieving such a balance have stimulated someinterest in neo-institutional sociology (NIS) as an alternative basis for exploring thepremises impeding a wider conception of performance in public sector organizations (Llewellyn, 1996; Brignall and Modell, 2000; Lawton et al., 2000).The present paper extends these efforts to study PM from an NIS perspective byexamining the responses of senior management and staff specialists to recent reformsin the public health care sector in Norway. While ample attention has been paid to theresponses of operating-level employees and managers occupying dual professionaland administrative roles to recent public sector reforms (e.g. Purdy, 1993; Pettersen,1995; Jones and Dewing, 1997; Llewellyn, 1997; Jacobs, 1998; Llewellyn, 1998; Modell,2000), more in-depth investigations of the less extensively explored issues of howand why senior management influences PM in public sector organizations may provide important complementary insights. Some prior studies indicate that thedevelopment of novel PM practices and other formalized control mechanisms inresponse to public sector reforms tend to be dominated by senior management andstaff specialists (Laughlin et al., 1994; Lawton et al., 2000). In their capacity as systemsdesigners, senior managers may thus function as translators of change through theirinteractions with the organization’s institutional environment (cf. Czarniawska andJoerges, 1996), which may involve some arbitration between conflicting constituentinterests (Brignall and Modell, 2000).Contrary to the assumptions invoked by much early theorizing in NIS, however,managers are not necessarily confined to passively comply with institutionalpressures, but may possess much wider action repertoires involving a greaterelement of pro-active choice (see e.g. DiMaggio, 1988; Powell, 1991; Scott, 1995;Beckert, 1999). While this insight is spreading among management accountingscholars informed by NIS (e.g. Abernethy and Chua, 1996; Covaleski et al., 1996; Euske and Riccaboni, 1999), no empirical study of multidimensional PM to date has systematically explored the responses of senior management along these lines. Giventhe capacity of PM to render visible the implications of public sector reforms forvarious organizational constituencies (cf. Brunsson, 1990; Broadbent, 1995), seniormanagement may need to exercise considerable caution in compiling performanceinformation for the purpose of legitimization. Hence, pro-active and careful selectionof indicators reflecting a broader range of financial and non-financial performanceaspects of concern to key constituencies may be warranted to balance conflictinginterests, although the institutional context of reforms is likely to pose someconstraints in this respect (Brignall and Modell, 2000).Following the discussion in the foregoing, the overriding research question to beexplored in this paper can be stated as follows: how do the properties of institutional