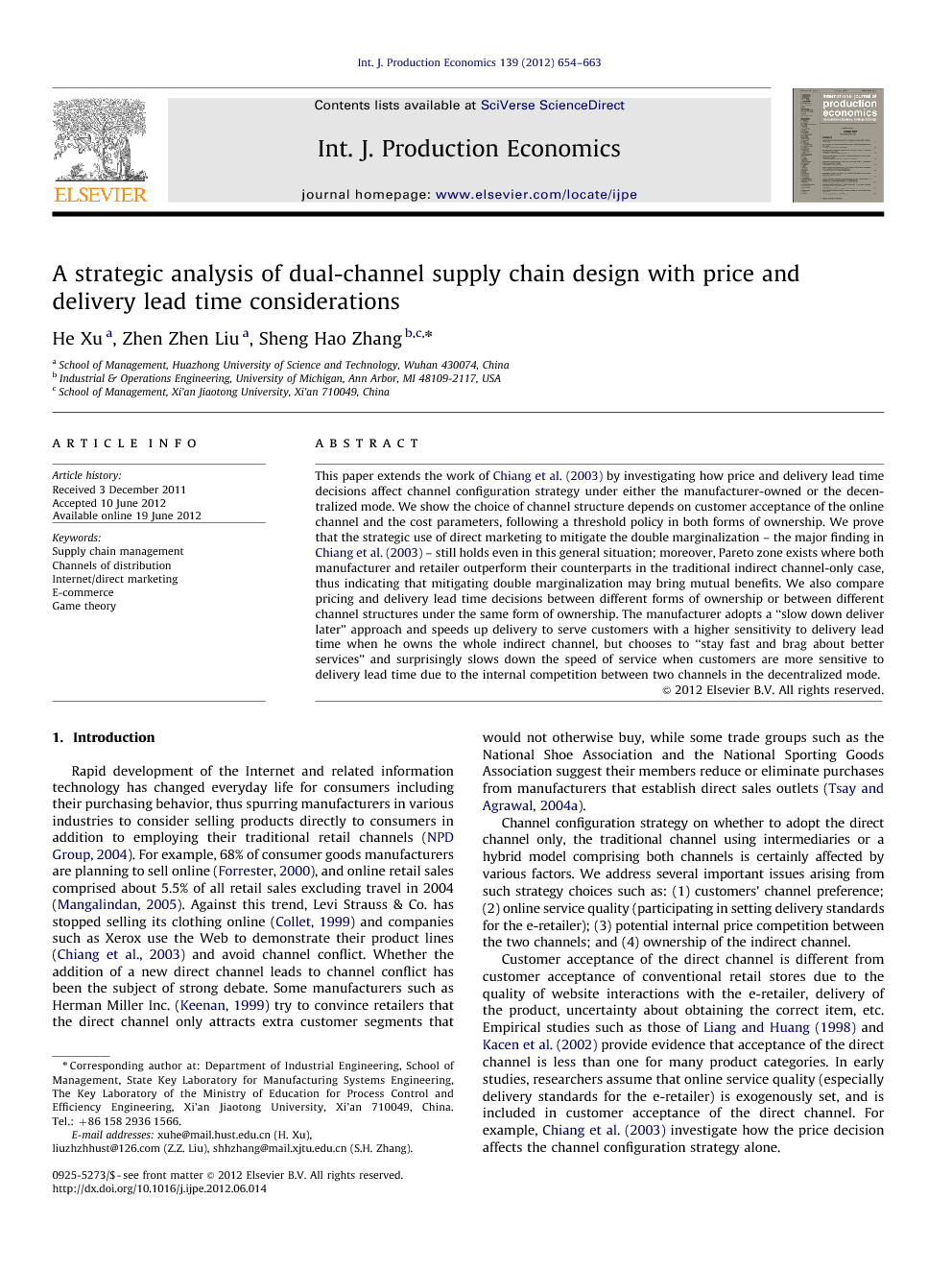 This paper extends the work of Chiang et al. (2003) by investigating how price and delivery lead time decisions affect channel configuration strategy under either the manufacturer-owned or the decentralized mode. We show the choice of channel structure depends on customer acceptance of the online channel and the cost parameters, following a threshold policy in both forms of ownership. We prove that the strategic use of direct marketing to mitigate the double marginalization – the major finding in Chiang et al. (2003) – still holds even in this general situation; moreover, Pareto zone exists where both manufacturer and retailer outperform their counterparts in the traditional indirect channel-only case, thus indicating that mitigating double marginalization may bring mutual benefits. We also compare pricing and delivery lead time decisions between different forms of ownership or between different channel structures under the same form of ownership. The manufacturer adopts a “slow down deliver later” approach and speeds up delivery to serve customers with a higher sensitivity to delivery lead time when he owns the whole indirect channel, but chooses to “stay fast and brag about better services” and surprisingly slows down the speed of service when customers are more sensitive to delivery lead time due to the internal competition between two channels in the decentralized mode.

We extend the findings of Chiang et al. (2003) by demonstrating the channel configuration strategy to be adopted when both price and delivery lead time in the online channel are endogenously determined under either the manufacturer-owned or the decentralized mode. Our paper shows that a threshold policy similar to that proposed by Chiang et al. (2003) controls the channel configuration strategy, even in this general situation. Specifically, when the manufacturer owns the indirect channel, it may adopt any channel structure (indirect channel only, direct channel only or dual channel), while it may adopt either the indirect channel only or a dual channel strategy in the decentralized mode, depending on customer acceptance of the online channel and the cost parameters. We also observe that the direct channel is used as an instrument to threaten the independent retailer and mitigate double marginalization in the decentralized mode. With the aid of analytical and numerical methods, we compare pricing and delivery lead time decisions between different forms of ownership or different channel structures under the same form of ownership and show that a Pareto zone exists where both manufacturer and retailer outperform their counterparts in the traditional channel, thus indicating that mitigating the double marginalization effect may bring mutual benefits. Future work on this topic should include empirical studies such as those of Liang and Huang (1998) and Kacen et al. (2002). As we decouple the delivery speed effect from customer acceptance of the online channel as defined by Chiang et al. (2003), empirical studies are needed to verify this new parameter. Moreover we assume that customers have homogenous tastes on direct channel performance. Future studies should consider how the heterogeneity of customers affects channel selection strategy. Another issue worthy of investigation is how different types of customers affect channel selection strategy, a question previously touched on by Cai (2010). A final issue of interest is to understand how the asymmetric information (like delivery cost) affects channel configuration strategy together with pricing and delivery decisions. We leave these questions for future research.