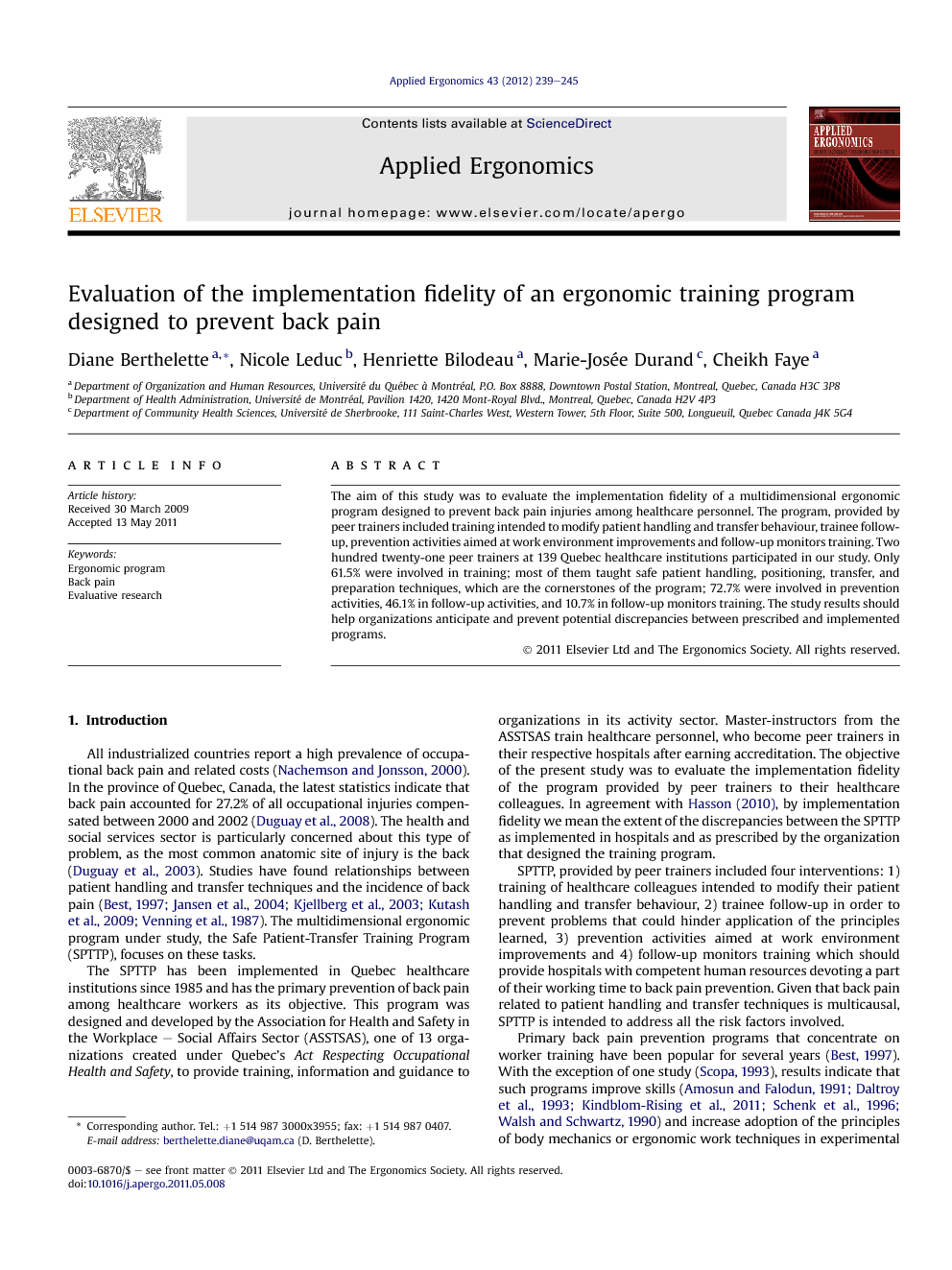 The aim of this study was to evaluate the implementation fidelity of a multidimensional ergonomic program designed to prevent back pain injuries among healthcare personnel. The program, provided by peer trainers included training intended to modify patient handling and transfer behaviour, trainee follow-up, prevention activities aimed at work environment improvements and follow-up monitors training. Two hundred twenty-one peer trainers at 139 Quebec healthcare institutions participated in our study. Only 61.5% were involved in training; most of them taught safe patient handling, positioning, transfer, and preparation techniques, which are the cornerstones of the program; 72.7% were involved in prevention activities, 46.1% in follow-up activities, and 10.7% in follow-up monitors training. The study results should help organizations anticipate and prevent potential discrepancies between prescribed and implemented programs.

Our results were useful to the ASSTSAS, which became aware of the problems associated with the implementation of its program and was prompted to seek solutions. Furthermore, the results will allow any organization studying the feasibility of implementing a program similar to the SPTTP to anticipate discrepancies likely to arise between the prescribed and implemented programs. The results could also guide administrators seeking to appraise their own program implementation and introduce corrective measures. Based on their systematic review of clinical trials, Maher (2000) and Van Poppel et al., 1998 and Van Poppel et al., 2004 found limited evidence that training did not help prevent back pain in the workplace. Most epidemiological studies of back pain training programs have adopted the black box approach (Chen and Rossi, 1983), in which the authors neglect to specify the underlying program theory. Without knowledge of the underlying program theory, it is difficult to ascertain the external validity and usefulness of the study’s inferences. In the systematic reviews, when clinical trial results are available, the authors often exclude the other types of designs, which are described as methodologically weaker and as coming from disciplines other than epidemiology, such as evaluative research or ergonomics (Neumann et al., 2010). The results of observational evaluations must be taken into account in practical evidence-based guidelines. Without them, such guidelines would be biased, reflecting interventions that are easy to evaluate using epidemiological methods but that are not necessarily more efficient or are characterized by a high cost/benefit ratio (Des Jarlais et al., 2004). Given the prevalence of occupational back pain and the lack of scientific evidence on the effectiveness of multidimensional programs designed to prevent its incidence, more evaluative research is needed. However, the implementation fidelity of such complex programs must be appraised and ensured before their effectiveness is evaluated in real work settings. Otherwise, studies may conclude erroneously that the program is ineffective when the real problem could be faulty implementation (Dobson and Cook, 1980 and Hasson, 2010).