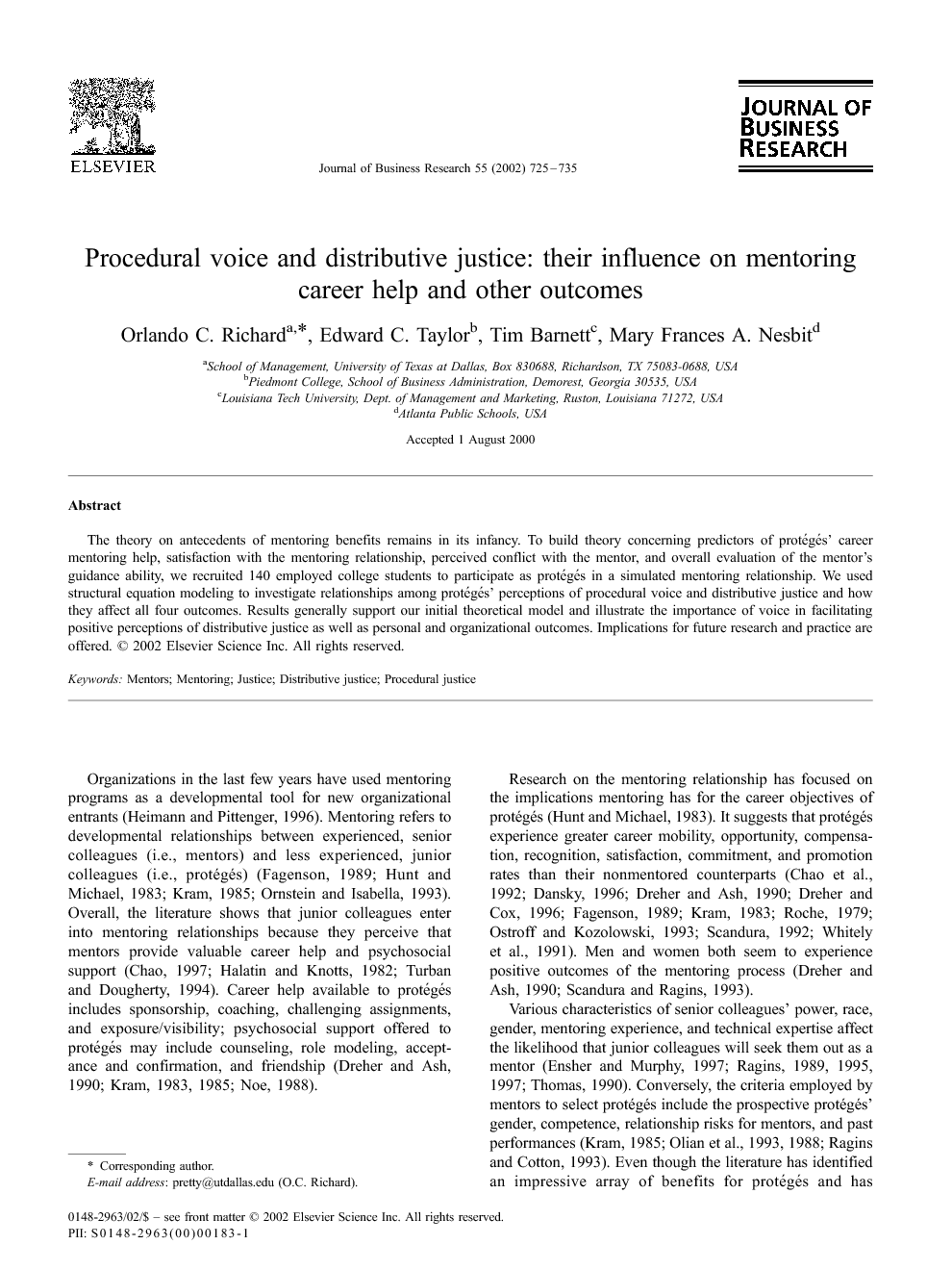 The theory on antecedents of mentoring benefits remains in its infancy. To build theory concerning predictors of protégés' career mentoring help, satisfaction with the mentoring relationship, perceived conflict with the mentor, and overall evaluation of the mentor's guidance ability, we recruited 140 employed college students to participate as protégés in a simulated mentoring relationship. We used structural equation modeling to investigate relationships among protégés' perceptions of procedural voice and distributive justice and how they affect all four outcomes. Results generally support our initial theoretical model and illustrate the importance of voice in facilitating positive perceptions of distributive justice as well as personal and organizational outcomes. Implications for future research and practice are offered.

4.1. Research implications The results were generally consistent with our theoretical model and support an organizational justice perspective regarding protégés' realization of the benefits of mentoring relationships. Respondents perceived the mentoring relationship in more positive terms when they perceived that the mentoring process was fair (procedural voice) and when they perceived the outcomes of the process as fair (distributive justice). Voice has been identified as an important component of procedural justice and the present study suggests that it is potentially an important factor in the success of mentoring relationships. Our results suggest that voice operates in at least two ways to positively impact mentoring outcomes. First, in a manner consistent with the group-value model of procedural justice (Lind and Tyler, 1988), procedural voice signals to protégés that they are a valued member of the organization and that mentors are genuinely interested in their problems, ideas, and opinions. Protégés respond favorably to this signal by perceiving the mentoring relationship in more positive terms. Second, in a manner consistent with the fair-process effect (Greenberg, 1990), procedural voice increases protégés' perception that the outcomes of the mentoring relationship will be fair. In turn, the perception of distributive justice is associated with more positive evaluations of the mentoring relationship. The generalizability of this study is affected by the use of students with limited work experience. Nevertheless, these findings are consistent with applicable theory and suggest a framework for a follow-up study in the workplace using respondents who have already faced the situations in the scenarios. Future research should address these relationships within an organizational justice framework, utilizing protégés who either have been or are currently involved in a mentoring relationship. We recommend utilization of more valid, established dependent measures than the one-item measures we used to measure outcomes. For example, recent research provides validated and reliable scales measuring conflict types Jehn, 1995 and Jehn, 1997. Affective conflict refers to the interpersonal clashes characterized by anger, distrust, animosity, fear, frustration, and other forms of negative emotional conflict. Task conflict, which contributes to a more complete analysis of issues, refers to disagreements between those involved about the content of the tasks being performed, including differences in viewpoints, ideas, and opinions (Pelled, 1996). Hence, while procedural and distributive justice may negatively relate to affective conflict consistent with our findings, a positive impact might be found for task conflict. Future research should investigate the possible relationships. 4.2. Implications for managers Research documenting the beneficial effects of voice on distributive justice judgments has implications for the organizational decision-making process. Given the positive effects that offering voice can provide to protégés, institutions should implement more participatory decision-making practices. This is especially important for formal mentoring programs in light of the fact that research has shown that protégés already gain less career help from formal relationships, compared to informal relationships (Chao et al., 1992). Kram (1986) warned of potential problems with formally assigned mentorships. Thus, given the potential problems associated with formal mentoring relationships, voice may serve as one mechanism facilitating the effectiveness of formal mentoring. This study suggests that mentors with management styles emphasizing “protégé voice” can enhance the likelihood of successful outcomes. It follows then that diversity programs using mentorships to provide opportunities for women and minorities could benefit from attention to the procedural and distributive justice issues. We found that when protégés have voice, they are more likely to be satisfied with the distributive outcomes and ultimately perceive more career mentoring help, more satisfaction with the arrangement, and less conflict, as well as a higher evaluation of the mentor's ability to guide. Thus, it appears that both the protégés and the organization gain when a fair procedure, incorporating voice, is used in the mentoring relationship.