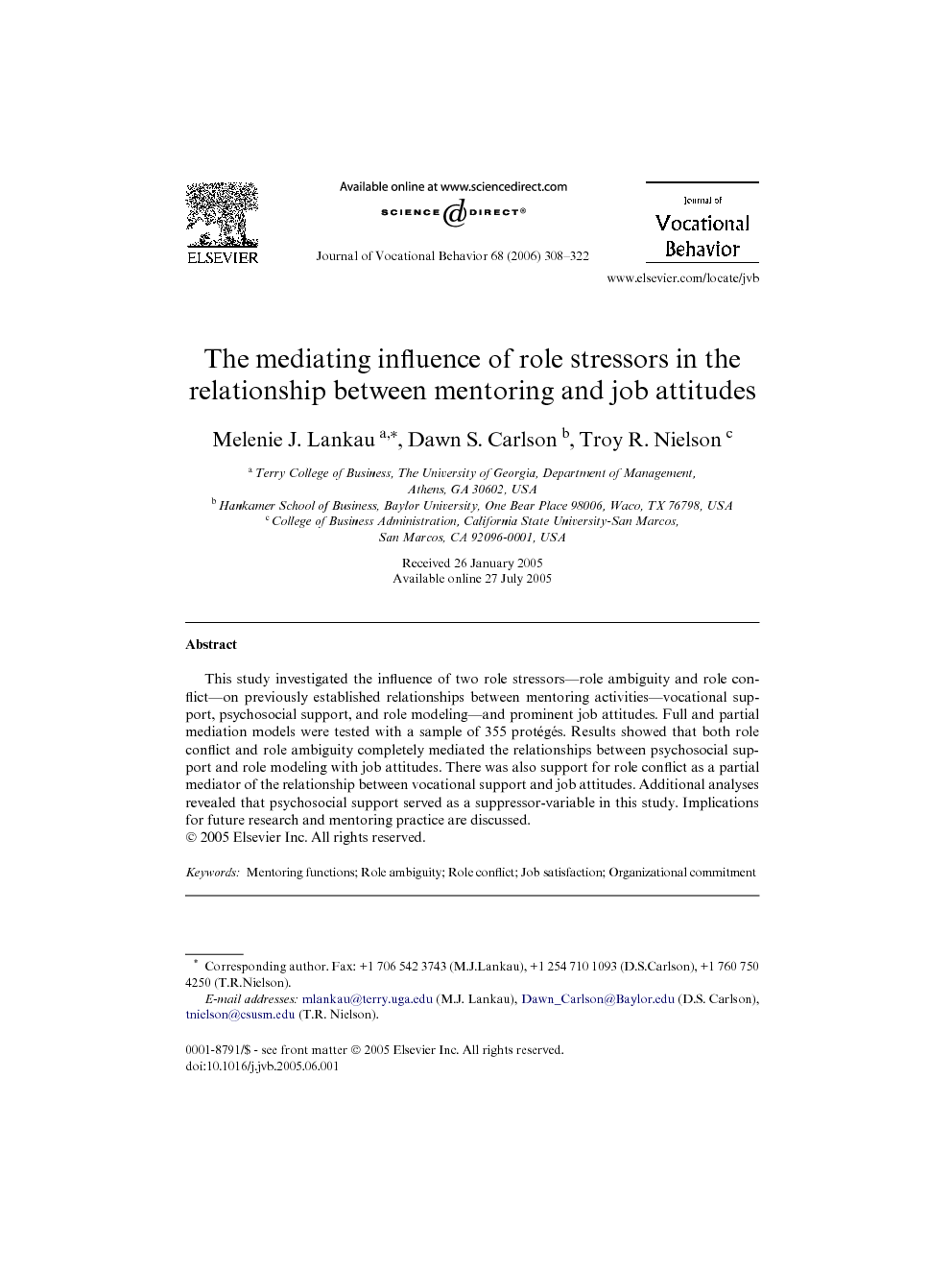 This study investigated the influence of two role stressors—role ambiguity and role conflict—on previously established relationships between mentoring activities—vocational support, psychosocial support, and role modeling—and prominent job attitudes. Full and partial mediation models were tested with a sample of 355 protégés. Results showed that both role conflict and role ambiguity completely mediated the relationships between psychosocial support and role modeling with job attitudes. There was also support for role conflict as a partial mediator of the relationship between vocational support and job attitudes. Additional analyses revealed that psychosocial support served as a suppressor-variable in this study. Implications for future research and mentoring practice are discussed.

Mentoring has been studied vigorously in the past two decades and a recent meta-analysis on protégé outcomes confirms that mentoring is positively related to attitudinal and career outcomes for protégés (Allen, Eby, Poteet, Lentz, & Lima, 2004). However, a comprehensive review of the mentoring literature highlighted the absence of research on mediators that explain how the mentoring process influences distal intrinsic outcomes like job satisfaction (Wanberg, Welsh, & Hezlett, 2003). Only three studies to date have tested and found support for mediators. Young and Perrewé (2000) found that mentors’ and protégés’ perceptions of met expectations of the other member of the dyad mediated the relationship between mentoring functions and relationship quality. Lankau and Scandura (2002) found that protégés’ personal learning mediated the relationship between mentoring functions and role ambiguity and job satisfaction. Lastly, Day and Allen (2002) found support for the mediating influences of self-efficacy and career motivation in the relationship between vocational support and self-reported performance effectiveness. However, more research on mediating mechanisms is warranted so that additional outcomes of mentoring may be identified from a greater understanding of how the mentoring process works (Wanberg et al., 2003). In this article, we propose that reductions in work role stress may represent another mediating mechanism to explain why mentoring has positive effects on protégés’ attitudes. Two of the most frequently examined types of work stress are role conflict and role ambiguity (Ivancevich and Matteson, 1980 and Jackson and Schuler, 1985). These role stressors have consistently been found to influence job satisfaction, organizational commitment, work family conflict, and intentions to quit (Carlson and Kacmar, 2000, Igbaria and Siegel, 1992, Jackson and Schuler, 1985 and King and Sethi, 1998). The literature has identified organizational training programs and supervisory practices as interventions to reduce the amount of stress experienced by organizational members (Chebat and Kollias, 2000, O’Driscoll and Beehr, 1994 and Russ et al., 1998). However, the impact of mentoring on role stressors has received minimal attention. The purpose of this study was to examine whether role stressors mediate the relationships between mentoring functions and two well-established outcomes of mentoring–job satisfaction and organizational commitment. We propose that greater levels of mentoring functions are associated with lower levels of role stressors for protégés and that lower levels of role stressors are associated with higher levels of job satisfaction and organizational commitment. This study addresses two important gaps in the literature: (1) the need to uncover mediating mechanisms in the mentoring-attitudinal outcomes process; and (2) the need to examine additional organizational practices that can help employees better cope with stress from work roles.

The importance of the mentoring relationship is once again confirmed by this study. Mentors not only contribute to employee career outcomes such as pay and promotions, but they may also help employees cope with uncertainty in the work environment, which can positively affect job satisfaction and organizational commitment. Organizations should be particularly interested in this finding since the ability of employees to adapt to stressful changes in work design, organizational structure, technology, and customer demands represents a competitive advantage. It is hoped that managers and human resource practitioners will encourage positive mentoring relationships and more specifically utilize mentoring as a mechanism for employees to cope with the high levels of ambiguity and conflict present in the workplace today.