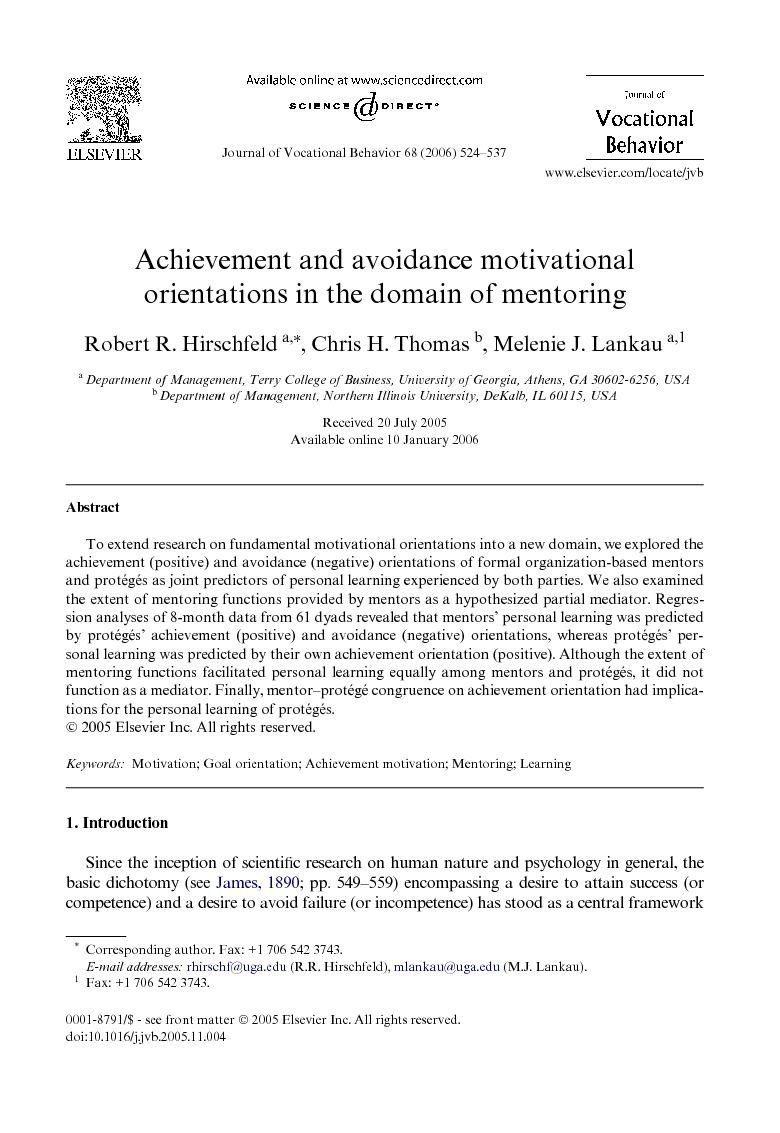 Since the inception of scientific research on human nature and psychology in general, the basic dichotomy (see James, 1890; pp. 549–559) encompassing a desire to attain success (or competence) and a desire to avoid failure (or incompetence) has stood as a central framework for researching and understanding human motivation and behavior (Elliot, 1999, Higgins, 1997, James and Mazerolle, 2002 and McClelland, 1951). In underscoring the continuing and widespread relevance of this basic framework for psychological research in the 21st century, Elliot and Thrash recently proposed that “the distinction between approach and avoidance motivation is fundamental and integral to the study of affect, cognition, and behavior and that this distinction may be used as a conceptual lens through which to view the structure of personality” (2002, p. 804). The notion that approach and avoidance motivations are distinct phenomena rather than virtual opposites, as implied by Elliot and Thrash, is perhaps counterintuitive. Yet, designating them as relatively independent within the structure of personality and self-regulation stems from the neurological “go” or approach system (left hemisphere of the frontal cortex) being separate from the neurological “no go” or avoidance system (right hemisphere) (for overviews, see Carver and Scheier, 2000, Elliot and Thrash, 2002 and Graziano and Eisenberg, 1997). As a consequence of being rooted in distinct dispositional systems, approach and avoidance motivations should be at most only moderately (rather than strongly) inversely related. Although approach and avoidance motivations have together played a central role in understanding much of human experience, research has not applied them to understanding the experiences of mentors and protégés. In this study, we incorporated these motivations by focusing specifically on achievement and avoidance orientations as propensities with unique implications for the learning experiences of individuals in mentoring relationships. In particular, we investigated in tandem the achievement and avoidance motivational orientations of mentors and protégés as predictors of personal learning experienced by both parties in a formal mentoring relationship. We also examined whether the predicted relationships between these motivational orientations and personal learning are accounted for by extent of mentoring functions provided. Finally, we explored whether mentor–protégé congruence on achievement and/or avoidance orientations had ramifications for personal learning, extent of mentoring functions provided, or both.