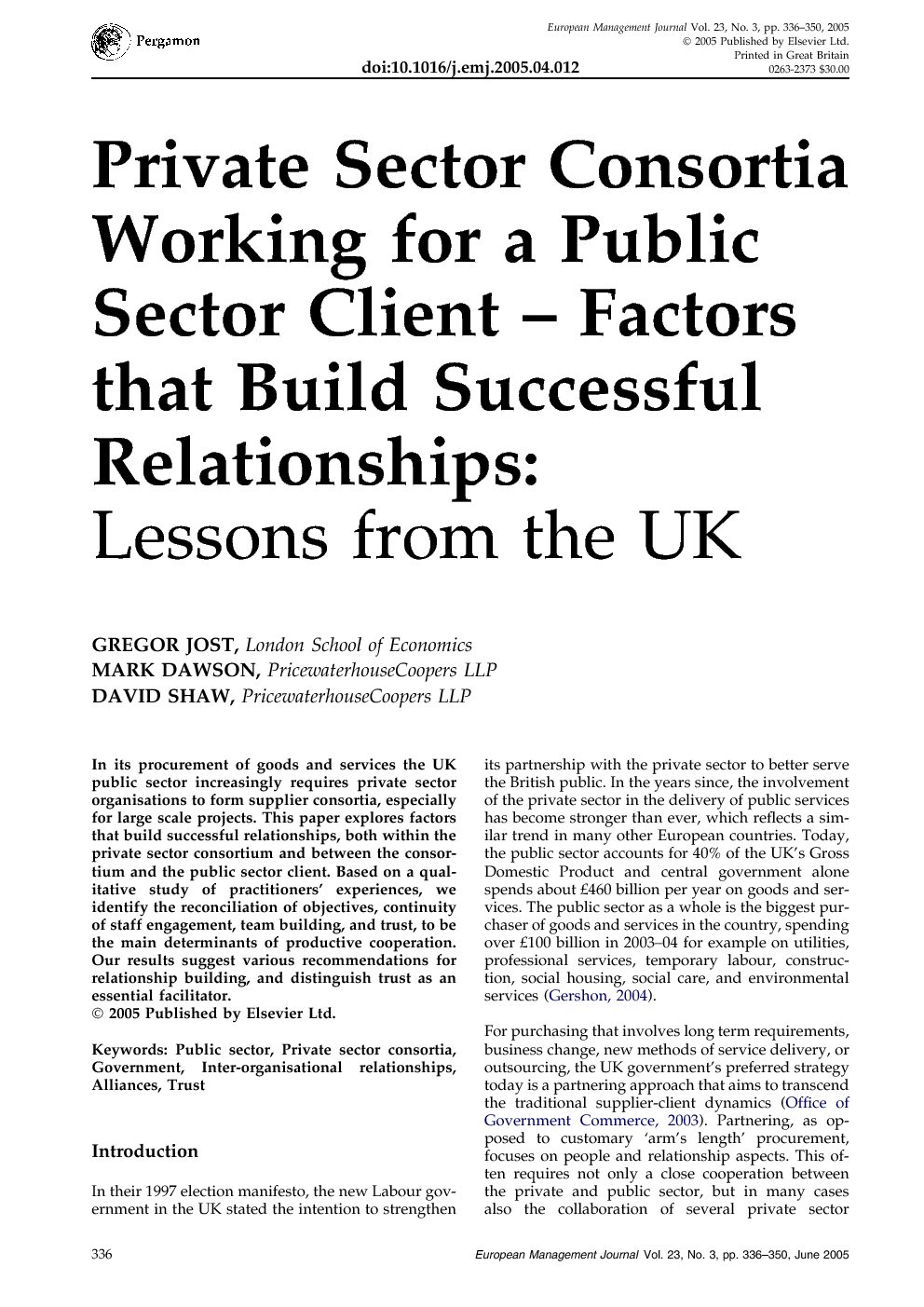 In its procurement of goods and services the UK public sector increasingly requires private sector organisations to form supplier consortia, especially for large scale projects. This paper explores factors that build successful relationships, both within the private sector consortium and between the consortium and the public sector client. Based on a qualitative study of practitioners’ experiences, we identify the reconciliation of objectives, continuity of staff engagement, team building, and trust, to be the main determinants of productive cooperation. Our results suggest various recommendations for relationship building, and distinguish trust as an essential facilitator.

In their 1997 election manifesto, the new Labour government in the UK stated the intention to strengthen its partnership with the private sector to better serve the British public. In the years since, the involvement of the private sector in the delivery of public services has become stronger than ever, which reflects a similar trend in many other European countries. Today, the public sector accounts for 40% of the UK’s Gross Domestic Product and central government alone spends about £460 billion per year on goods and services. The public sector as a whole is the biggest purchaser of goods and services in the country, spending over £100 billion in 2003–04 for example on utilities, professional services, temporary labour, construction, social housing, social care, and environmental services (Gershon, 2004). For purchasing that involves long term requirements, business change, new methods of service delivery, or outsourcing, the UK government’s preferred strategy today is a partnering approach that aims to transcend the traditional supplier-client dynamics (Office of Government Commerce, 2003). Partnering, as opposed to customary ‘arm’s length’ procurement, focuses on people and relationship aspects. This often requires not only a close cooperation between the private and public sector, but in many cases also the collaboration of several private sector organisations that are linked in a supplier consortium. As will be explained further below, there is often a formal or informal requirement for suppliers to join forces. While the government can define its objectives in such arrangements (Strategic Partnering Taskforce, 2004), for many private sector companies this is a novel situation. Not only will a range of different stakeholders have to be accommodated, but productive cooperation with potentially many different partners is imperative. Hence, consortium partners face a unique set of challenges that necessitate systematic examination. Barringer and Harrison (2000) acknowledge this by pointing out that the contextual influences and the effectiveness of consortium arrangements have not been subject to much applied research. In the present study we therefore attempt to shed light on this type of partnering between the private and public sector by means of an empirical investigation with involved practitioners. In order to fully understand the specific scenario of private sector organisations teaming up to serve a public sector client, it is essential to first of all explore the wider context of collaborations between organisations. In the following, the dynamics involved in such arrangements will be introduced.

Achieving the desired outcomes when private sector consortia work for public sector clients depends to a large degree on managing the relationships between a diverse set of organisations. The illustrated key drivers in this effort function at three levels of analysis and have been identified as the reconciliation of organisational objectives, the continuity of staff engagement on the project, and team building across consortium organisations. According to the respondents in this study, heeding those factors depends on as well as facilitates the building of trust as the underlying fundament of constructive collaboration. In consequence, trust as a mediator between the identified variables and desired outcomes should be the core objective when attempting to manage relationships in consortium arrangements.