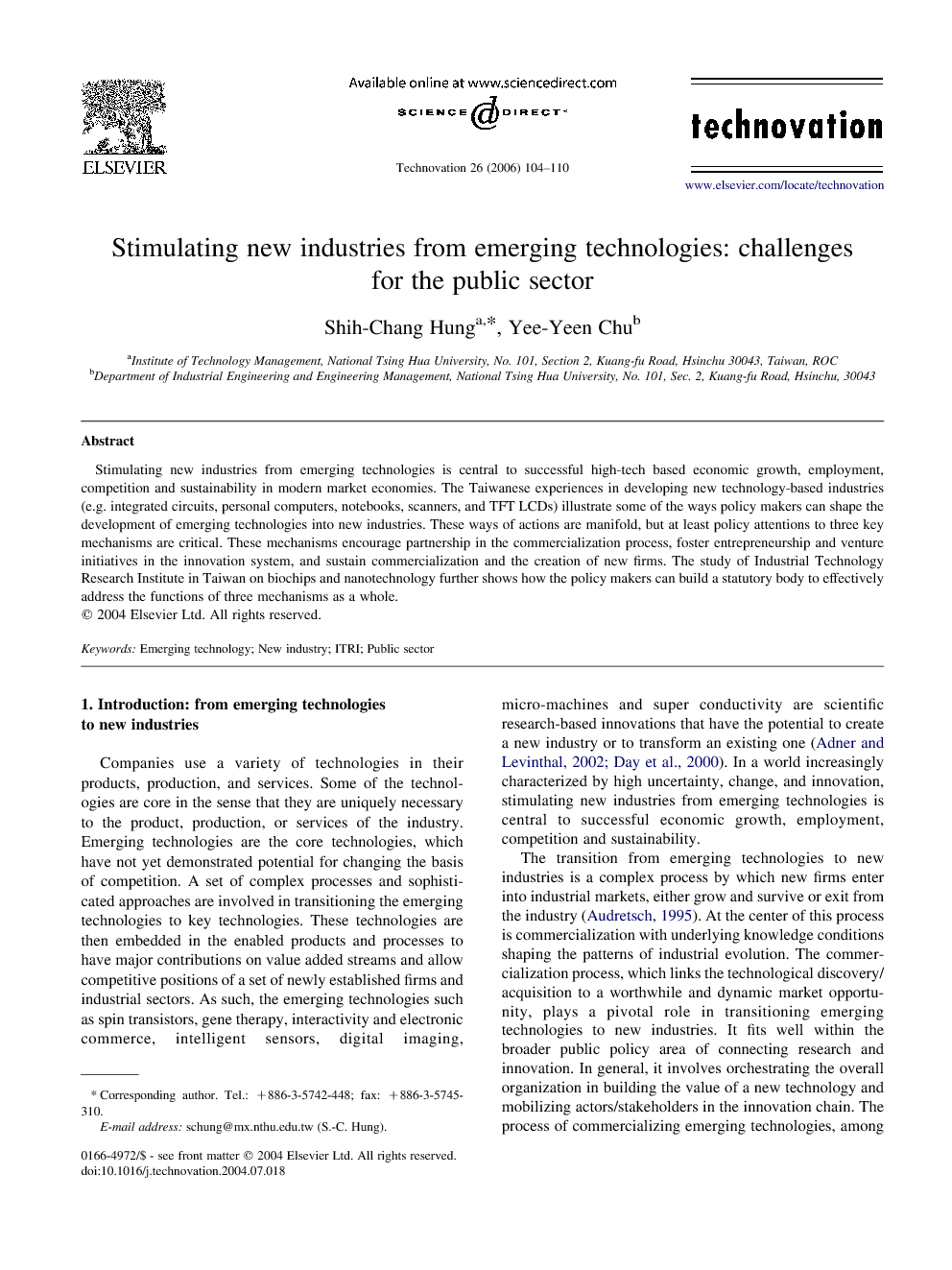 Stimulating new industries from emerging technologies is central to successful high-tech based economic growth, employment, competition and sustainability in modern market economies. The Taiwanese experiences in developing new technology-based industries (e.g. integrated circuits, personal computers, notebooks, scanners, and TFT LCDs) illustrate some of the ways policy makers can shape the development of emerging technologies into new industries. These ways of actions are manifold, but at least policy attentions to three key mechanisms are critical. These mechanisms encourage partnership in the commercialization process, foster entrepreneurship and venture initiatives in the innovation system, and sustain commercialization and the creation of new firms. The study of Industrial Technology Research Institute in Taiwan on biochips and nanotechnology further shows how the policy makers can build a statutory body to effectively address the functions of three mechanisms as a whole.

Speeding up the transition process from emerging technologies to new industries is central to successful economic growth, employment, competition and sustainability in economies. There are three key mechanisms in speeding up the process. The first mechanism speaks to the encouragement of partnership in the process of commercialization. Some of the issues of concern are incentives and regulations provided to support innovation and cooperative R&D, partial public funding of privately performed R&D, and the setup of effective public/private partnership mechanisms. The second mechanism in speeding up the transition process is related to the promotion of entrepreneurship and venture initiatives in the innovation system. Some of the issues of concern in the new economy are fostering the community dynamics of entrepreneurship, the effective support mechanisms for private innovation, incentives for entrepreneurship in the transition, and the international corporate entrepreneurship. The third mechanism addresses the sustainability of the commercialization process and the creation of new firms. Some of the issues of concern are the fostering R&D ventures and entrepreneurial capacity, establishing public support mechanisms targeted for sources of innovation market failures, mobilizing public support to enhance the post-entry performance, and designing an effective policy for stimulating technology diffusion and development of the industry sector. The three mechanisms are, however, neither isolated nor difficult to build up once they are initiated properly, as the case study of ITRI in biochips and nanotechnology demonstrates how the government can build a statutory body to effectively address the functions of the mechanisms as a whole.