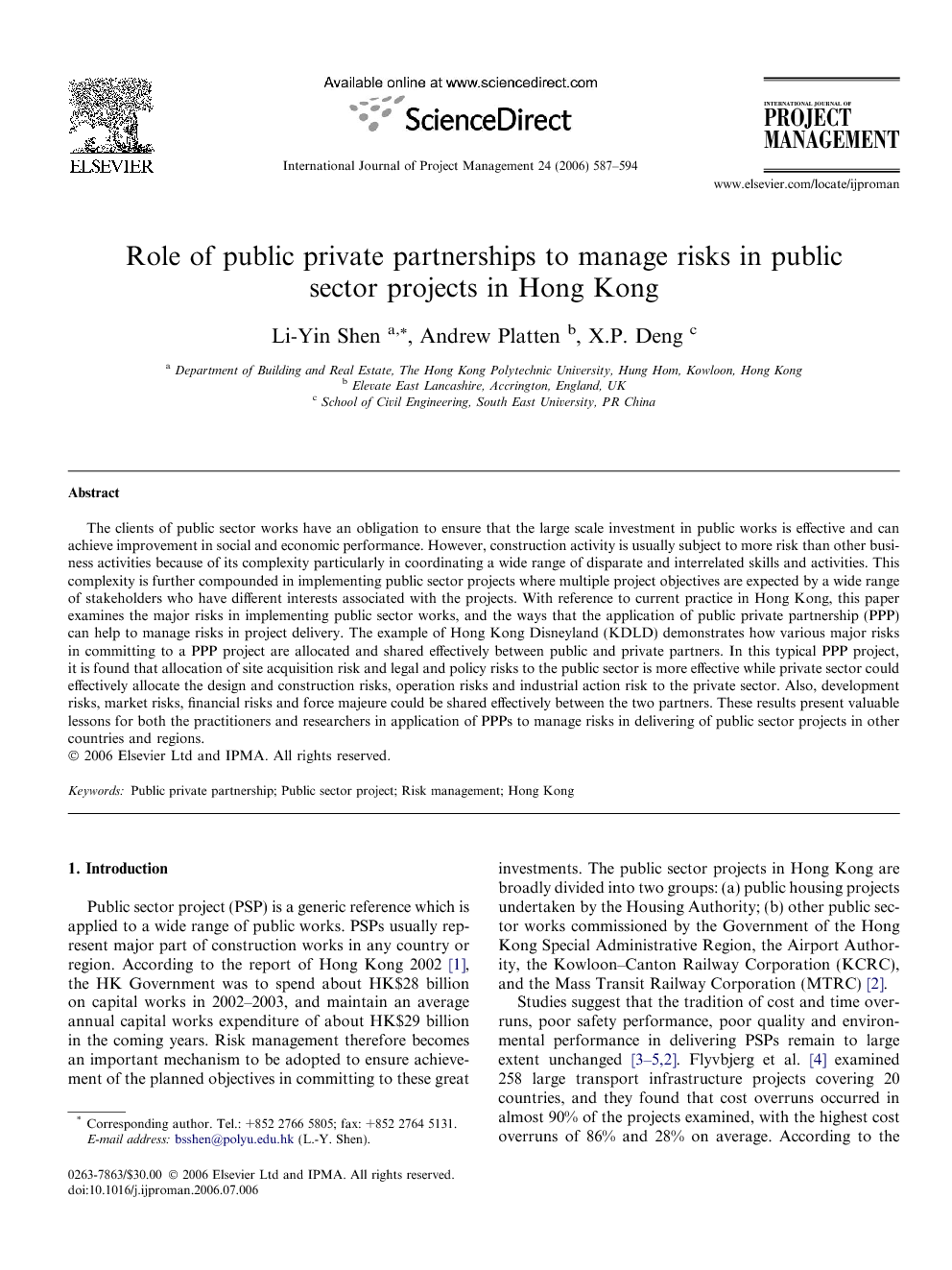 The clients of public sector works have an obligation to ensure that the large scale investment in public works is effective and can achieve improvement in social and economic performance. However, construction activity is usually subject to more risk than other business activities because of its complexity particularly in coordinating a wide range of disparate and interrelated skills and activities. This complexity is further compounded in implementing public sector projects where multiple project objectives are expected by a wide range of stakeholders who have different interests associated with the projects. With reference to current practice in Hong Kong, this paper examines the major risks in implementing public sector works, and the ways that the application of public private partnership (PPP) can help to manage risks in project delivery. The example of Hong Kong Disneyland (KDLD) demonstrates how various major risks in committing to a PPP project are allocated and shared effectively between public and private partners. In this typical PPP project, it is found that allocation of site acquisition risk and legal and policy risks to the public sector is more effective while private sector could effectively allocate the design and construction risks, operation risks and industrial action risk to the private sector. Also, development risks, market risks, financial risks and force majeure could be shared effectively between the two partners. These results present valuable lessons for both the practitioners and researchers in application of PPPs to manage risks in delivering of public sector projects in other countries and regions.

Public sector project (PSP) is a generic reference which is applied to a wide range of public works. PSPs usually represent major part of construction works in any country or region. According to the report of Hong Kong 2002 [1], the HK Government was to spend about HK$28 billion on capital works in 2002–2003, and maintain an average annual capital works expenditure of about HK$29 billion in the coming years. Risk management therefore becomes an important mechanism to be adopted to ensure achievement of the planned objectives in committing to these great investments. The public sector projects in Hong Kong are broadly divided into two groups: (a) public housing projects undertaken by the Housing Authority; (b) other public sector works commissioned by the Government of the Hong Kong Special Administrative Region, the Airport Authority, the Kowloon–Canton Railway Corporation (KCRC), and the Mass Transit Railway Corporation (MTRC) [2]. Studies suggest that the tradition of cost and time overruns, poor safety performance, poor quality and environmental performance in delivering PSPs remain to large extent unchanged [3], [4], [5] and [2]. Flyvbjerg et al. [4] examined 258 large transport infrastructure projects covering 20 countries, and they found that cost overruns occurred in almost 90% of the projects examined, with the highest cost overruns of 86% and 28% on average. According to the report of NAO [6], approximately 70% of the projects financed by the central government experienced delays in final completion in the UK, for example. Other consequences due to poor project performance include poor investment returns from the use of the project, delay in the utilisation of the public facilities and extended inconvenience for the public. All of these problems exert a huge financial pressure on government, and they can hold back or impair planned economic development. To improve the efficiency of managing project risks, the Hong Kong Government has been promoting the application of new procurement strategies for the implementation of public sector works, in particular, the mechanism of public private partnerships (PPPs). PPP is an effective approach to enhance project productivity by bringing in management efficiency and creative skills from business practice, and reducing governmental involvement by using private sectors in the provision of public services. PPP is a development from the procurement strategy of BOT (Build, Operate and Transfer) and it is particularly suitable for large scale infrastructure projects. BOT system has been mainly promoted in developing economies where infrastructure works account for the majority of public investment. This situation arises from the need to reduce the public sector budget contribution to infrastructure investment and where efficiency gains from commercial practices can be imported to the sector. In order to reduce public borrowing to finance direct expenditure, the governments in developing countries have found private sources of project finance as an effective strategy to assist implementation of these projects [7]. The application of PPP has become increasingly popular in developed economies for gaining the advantage of improving efficiency and mitigating risks. The Hong Kong Efficiency Unit [8] opted that effectiveness of PPP is based on a partnership approach, where the responsibility for the delivery of services is shared between the public and private sectors, both of which bring in their complementary skills to the enterprise. By referring to the practice in Hong Kong, this paper examines the major risks in the implementation of public sector works, and thereby the ways that the application of PPP can effectively manage risks in project delivery. Two constructive interviews with senior officials in the Efficiency Unit of the Hong Kong SAR Government were conducted for data collection and discussions. The discussions over the two planned interviews generated valuable data and understanding of the application of PPPs in Hong Kong public sector works. The Efficiency Unit is the official department for promoting the application of PPPs in Hong Kong [8]. A case study analysis on PPP project in Hong Kong was also conducted. The selected case study is a typical PPP project in Hong Kong which constitutes the public real estates operated by private sectors. The analyses on these data will result in valuable research findings to present lessons learned in application of PPPs to manage risk in public sector projects in other countries or regions. The paper is structured in the following manner. First, the paper presents an investigation into the delivering of public sector projects in Hong Kong, which will lead to an analysis of typical risks in public sector projects. Third, the role of PPP to manage risks in public sector project is presented in a framework based on insights from the above analysis. Forth, the framework is applied to conduct a case study on a PPP project in recreational sector in Hong Kong. Finally, conclusions and recommendations follow.

The adoption of PPP in developing public sector projects has been widely promoted to aim at achieving multiple project objectives and mitigating project risks. By using PPP approach, the private partner’s skills in managing an enterprise and controlling the efficiency and effectiveness in running a business can be brought to improve the effectiveness in mitigation of operation risks in running public sector projects. For example, by partnership, the government concerned and the private partners have sufficient time to develop project specifications before the construction of a project, thus mitigating the design errors which could become very costly during the construction stage. By referring to the practice in Hong Kong, this paper examines the nature of public sector projects and the major risks in the implementation of public sector works. These major risks are identified as project-related, government-related, client-related, design-related, contractor-related, consultant-related, and market-related risk factors. When PPP mechanism is adopted in implementing public sector projects, these risks can be controlled and managed effectively by allocating them between the government and the private sector. The example of HKDLD demonstrates how various major risks in committing to a PPP project are allocated or shared effectively between the government and private partner. In this typical PPP project, it is found that allocation of site acquisition risks, inexperienced private partner risk and legal and policy risks to the public sector is appropriate. Also, allocation of the design and construction risks, operation risks and industrial action risks to the private sector, and sharing of development risks, market risks, financial risks and force majeure between the two parties is important. These results present valuable lessons for both the practitioners and researchers in application of PPPs to manage risks in delivering public sector projects in other countries and regions.