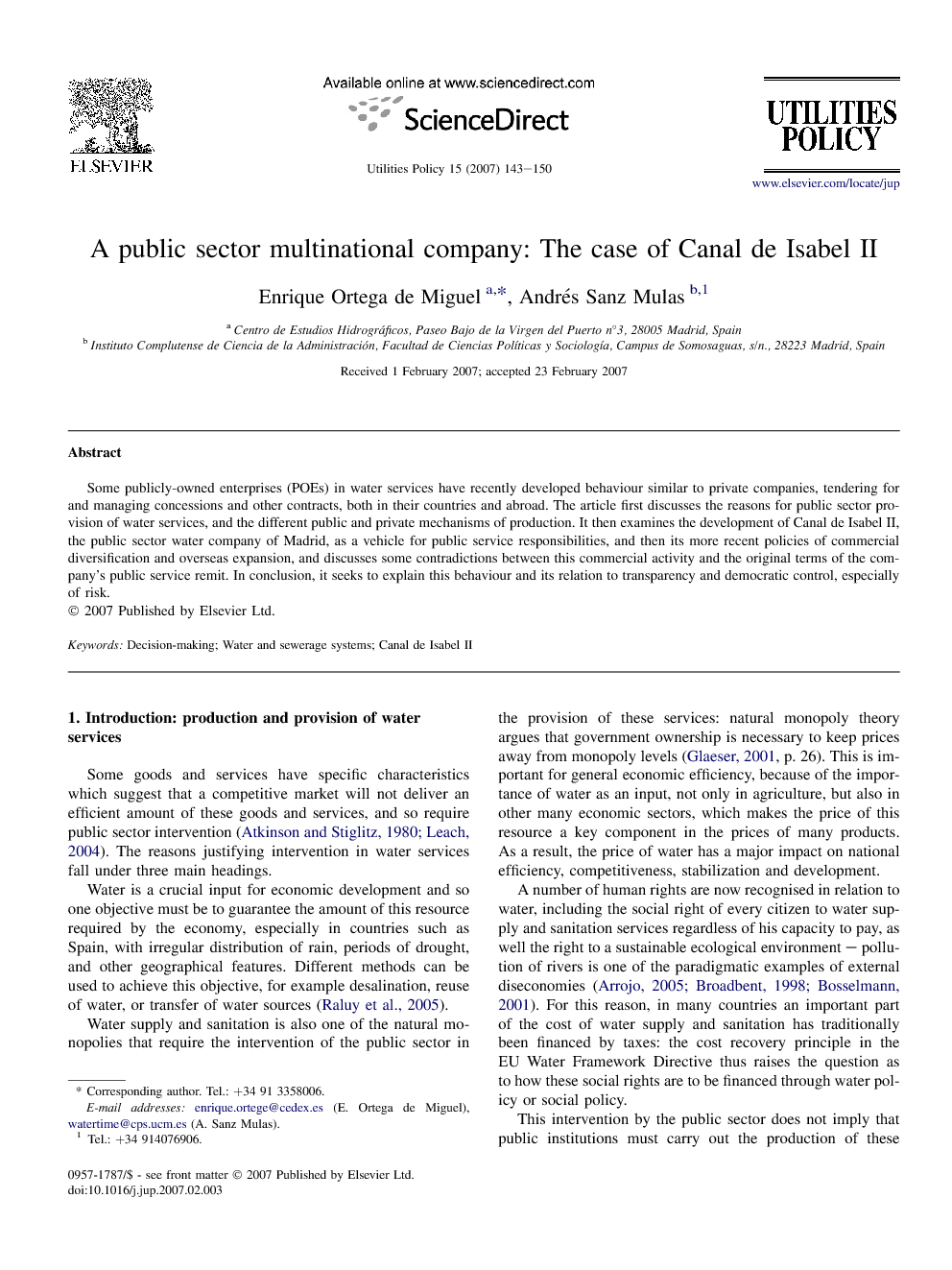 Some publicly-owned enterprises (POEs) in water services have recently developed behaviour similar to private companies, tendering for and managing concessions and other contracts, both in their countries and abroad. The article first discusses the reasons for public sector provision of water services, and the different public and private mechanisms of production. It then examines the development of Canal de Isabel II, the public sector water company of Madrid, as a vehicle for public service responsibilities, and then its more recent policies of commercial diversification and overseas expansion, and discusses some contradictions between this commercial activity and the original terms of the company's public service remit. In conclusion, it seeks to explain this behaviour and its relation to transparency and democratic control, especially of risk.

Some goods and services have specific characteristics which suggest that a competitive market will not deliver an efficient amount of these goods and services, and so require public sector intervention (Atkinson and Stiglitz, 1980 and Leach, 2004). The reasons justifying intervention in water services fall under three main headings. Water is a crucial input for economic development and so one objective must be to guarantee the amount of this resource required by the economy, especially in countries such as Spain, with irregular distribution of rain, periods of drought, and other geographical features. Different methods can be used to achieve this objective, for example desalination, reuse of water, or transfer of water sources (Raluy et al., 2005). Water supply and sanitation is also one of the natural monopolies that require the intervention of the public sector in the provision of these services: natural monopoly theory argues that government ownership is necessary to keep prices away from monopoly levels (Glaeser, 2001, p. 26). This is important for general economic efficiency, because of the importance of water as an input, not only in agriculture, but also in other many economic sectors, which makes the price of this resource a key component in the prices of many products. As a result, the price of water has a major impact on national efficiency, competitiveness, stabilization and development. A number of human rights are now recognised in relation to water, including the social right of every citizen to water supply and sanitation services regardless of his capacity to pay, as well the right to a sustainable ecological environment – pollution of rivers is one of the paradigmatic examples of external diseconomies (Arrojo, 2005, Broadbent, 1998 and Bosselmann, 2001). For this reason, in many countries an important part of the cost of water supply and sanitation has traditionally been financed by taxes: the cost recovery principle in the EU Water Framework Directive thus raises the question as to how these social rights are to be financed through water policy or social policy. This intervention by the public sector does not imply that public institutions must carry out the production of these goods and services. As Atkinson and Stiglitz (1980) explain, “we need to make an important distinction, between public production and public provision. Both are often confused, though logically and in practice they are distinct. The government provides for the National Defence, yet much of the production of the goods purchased for national defence is within the private sector”. Thus in the case of Spain, the provision of these services is the competence of municipalities, a public provision, but the production of these services may be carried out by public or private institutions (Puente, 2005). The system of production can be evaluated against public goals, including the objectives of efficiency and accountability. Public production could produce inefficient results, due to so-called government failures, but the assumption of a greater level of efficiency in the case of private production is based on the assumption of a competitive market amongst public services suppliers, and since there are no competitive markets in this field, private production is carried out in a monopoly or oligopoly context, and so in this case the allocation of resources will be inefficient (Mas-Collell et al., 1995). With the public sector, it is possible to establish mechanisms to reduce inefficiency through transparency and citizens' participation in decision-making (Sanz, 1998). Thus, public production permits the combination of efficiency and also the control, participation and accountability that any public provision requires. Efficiency improvements are also expected to come from creating an ‘arms-length’ publicly-owned enterprise (POE), permitting a greater level of management flexibility and as a result more efficiency and effectiveness, but the reduced level of public control of decision-making generates a greater risk that public goals may be reduced in importance. Thus, contrary to common assumptions, there is ample evidence of satisfactory achievement of social and public service objectives through efficient public sector undertakings, in transition and developing countries as well as in developed ones (Lobina and Hall, 2000). The water company of Madrid, Canal de Isabel II (CYII) is one example of a public organizations that has been able to provide and supply water services in an efficient and effective way over the years, as acknowledged in a World Bank report (World Bank, 2002). Other big Iberian cities have had private concessions for many years, though some of these returned to public management – Seville after a concession lasting from 1882 to 1966, and Lisbon after a concession lasting from 1868 to 1974 (Cámara de Cuentas de la Comunidad de Madrid, 2005a). But in recent years CYII has developed a commercially oriented strategy, developing this POE into a multinational holding company. This article focuses on the case of CYII as an example not only of efficient public production of water services, but also of the impact on public goals and objectives when a publicly-owned enterprise begins to operate commercially, and so more like private companies. The account of CYII is based on the report in the Watertime project (www.watertime.net) and the Urban Water Cycle Report of the Camara de Cuentas de la Comunidad de Madrid (Regional Audit Office) (Cámara de Cuentas de la Comunidad de Madrid, 2005a).

The performance of CYII, and other POEs, confirms the theoretical arguments set out in the introduction that such companies can be the most efficient and effective system for producing goods and services such as public water supply. Nevertheless CYII, and other POEs, has diversified and taken on unnecessary risks in multiple countries and sectors – other examples are Águas de Portugal and Acea, Roma (Lobina, 2005). This behaviour can be attributed to principal-agent problems. The first such problem arises because the Board of Directors, or the manager or other executives, have interests different from those of the Parliament or the public in relation to the objectives and the scope of these public companies. In the case of CYII, diversification and territorial expansion could generate great possibilities of new jobs, status, power and income for these executives, which fit the classic agency account where managers have selfish reasons for pursuing goals contrary to those of the principal. In one paper the managing director and economic director of CYII explained that, “CYII is committed to becoming one of the world-class groups in the sectors of water, energy and environment”, an objective that makes no sense for the Madrid parliament, but holds clear benefits for the mangers, its agents. The behaviour and objectives of the management of these POEs are very similar to those of private companies, which can also explain their use of PPP mechanism like the concession in Alcala. The resulting conglomerates often operate inefficiently – strong divisions, for example, may subsidize the weak – leading private investors to punish diversified companies (Kwak, 2002). But in diversified POEs, these risks are assumed by the public sector – either by being formally guaranteed by the public authority, or by being supported by a cross-subsidy from the revenues of the core water service. This is a problem for the public authority, and its citizens, as they incur this risk without any corresponding gain. But it is a benefit to the agents and their commercial partners in other private firms, because their cost of borrowing is reduced by this government “umbrella”. There is also a principal-agent problem in relation to accountability and transparency and public participation. The strategies of diversified multinational companies demand a high degree of confidentiality, and the capacity of the board to control managers is weakened by the network of company operations far beyond the local network which the board is concerned. The manager gains considerably from this confidentiality and lack of accountability, but it is contrary to the interests of the principal – the public authority and citizens – who require transparency and accountability in order to protect themselves against inefficiencies, incompetence or fraud. This principal-agent problem explains why participation and transparency levels are predictably low in such POEs, as described in the 2005 audit report on CYII and Madrid's water service: “In the course of the audit a hostile attitude has been observed in relation to transparency and therefore to the possibility of citizen participation. The configuration of grupo CYII as a corporate conglomerate that defines a medium and long term strategy in different markets, makes access to information and participation difficult” (Cámara de Cuentas de la Comunidad de Madrid, 2005a, p. 40). In summary, the case of CYII allows us to see some principal-agent problems that pervert the public production mechanism of water services, by creating organisations that use the advantages of public sector status to pursue private interest objectives. One way of avoiding this situation is through greater parliamentary control, greater requirements for information, and stronger external control mechanisms. Citizens' participation in the board of directors of this POE, like in EMACSA (Córdoba), could make it easier to protect public interest objectives in such companies.