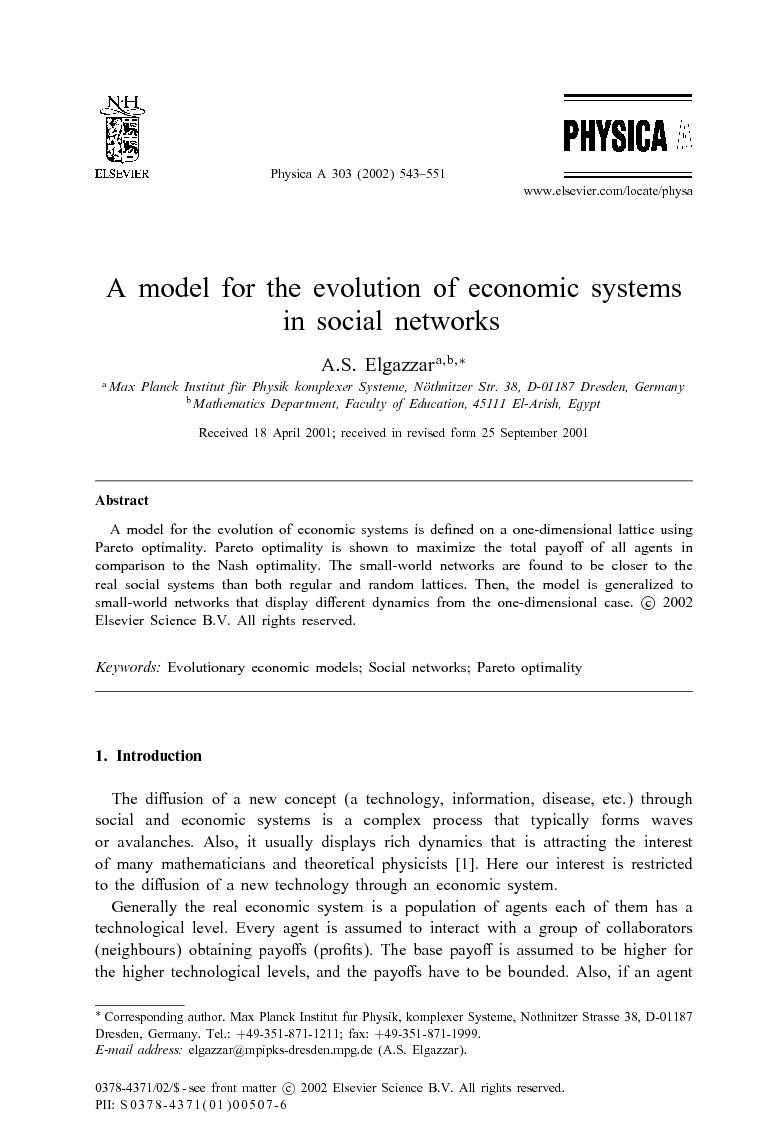 A model for the evolution of economic systems is defined on a one-dimensional lattice using Pareto optimality. Pareto optimality is shown to maximize the total payoff of all agents in comparison to the Nash optimality. The small-world networks are found to be closer to the real social systems than both regular and random lattices. Then, the model is generalized to small-world networks that display different dynamics from the one-dimensional case

The diffusion of a new concept (a technology, information, disease, etc.) through social and economic systems is a complex process that typically forms waves or avalanches. Also, it usually displays rich dynamics that is attracting the interest of many mathematicians and theoretical physicists [1]. Here our interest is restricted to the diffusion of a new technology through an economic system. Generally the real economic system is a population of agents each of them has a technological level. Every agent is assumed to interact with a group of collaborators (neighbours) obtaining payoffs (profits). The base payoff is assumed to be higher for the higher technological levels, and the payoffs have to be bounded. Also, if an agent is too advanced or too backward relative to his (her) neighbours, he (she) always has an incompatibility cost. Every agent has to modify his (her) technological level to obtain the best payoff. After a long time of interaction, the population reaches a state at which each agent is satisfied with his (her) payoff. Then an improved technological level is introduced by an agent. Usually the new technology has a cost. The neighbours of this agent update their technological levels according to the new conditions. They have the possibility to accept or refuse the new technology. The new technology may diffuse through the whole population making a uniform front for cheap updating cost. On the other hand, if the cost is very high, only few agents can modify their levels. For intermediate cost values, the updating process continues through the population making an avalanche until another stable state is reached, and so on. The avalanche's size, s is the number of agents that updated their levels in a step. It has been shown that [2] the avalanches size and several aspects of social and economic systems can be described in terms of power law distribution as, Towards a theoretical approach to this phenomena, an important step was taken by Arenas et al. [3], where a general model for the evolution in socio-economic environments is introduced. Their model considers a population of agents distributed on a regular one-dimensional (1d) lattice with periodic boundary conditions. Only local interactions are considered. Initially each agent i is proposed to have a random positive real variable ai which represents his (her) technological level. Each agent interacts with his (her) nearest neighbours, j=i±1, obtaining payoffs calculated according to the following function: At each time step, the technological level of a randomly chosen agent i is increased by a random variable Δ∈(0,1). Each of the nearest neighbours, j=i±1 has to update his (her) technological level. Agents are supposed to use Nash updating rule, which is defined as follows: Definition 1 Nash optimality. If the payoff of an agent is not the greatest payoff with respect to his (her) nearest neighbours, he (she) changes his (her) technological level to the level of one of his (her) nearest neighbours that raises his (her) payoff. This means the agent j selects the technological level which maximizes his (her) payoff from {aj−1,aj,aj+1}. In contrast to the previous model, it has been observed that [4] in many realistic situations the updating rule is Pareto not Nash. Definition 2 Pareto optimality. An agent changes his (her) technological level to the level of one of his (her) nearest neighbours that raises his (her) payoff only if his (her) payoff is less than the average payoff of his (her) group (he/she and the nearest neighbours). The implementation of this definition in the model is given in the next section. The person who uses the Nash updating rule behaves like he (she) is selfish. In contrast, the one who uses the Pareto updating rule is cooperative, because he (she) tries to maximize the average payoff of his group. Pareto optimality usually implies less erratic behaviour than Nash optimality [5]. Also, it has been proved that the payoff from Pareto updating rule is generally higher or equal to that from Nash updating rule [6]. In the real social networks, every one has a group of collaborators, some of them will often be collaborators of another person, this property is called clustering. Also, it has been found that [7] any two randomly chosen persons in the world are separated by a few number of acquaintances, this phenomenon is known as small-world effect. For a graph, this means that the average shortest vertex to vertex distance is very short compared with the size of the lattice. Regular lattices display the clustering property only. On the other hand, random graphs [8] show the small-world effect, but do not display clustering. Recently, small-world networks (SWN) have been introduced [9] and [10] to combine both features. Currently, SWN are considered to be a good description for real social networks. The aim of this work is to redefine the Arenas et al. model [3] for the evolution of economic systems on both 1d and SWN lattices using Pareto updating rule. The paper is organized as follows: In Section 2, some analytical and numerical results for the 1d model are given. Also, a comparison between Pareto and Nash optimality is presented. Some properties of SWN are derived in Section 3. The model is generalized to SWN in Section 4. Section 5 contains some conclusions.

SWN are a good approach in modelling real social and economic systems. Both generalizing the model to SWN and using the Pareto optimality do not destroy the critical behaviour of the original model. If all agents of an economic system use the Pareto optimality, their payoff will be maximized better and faster than the case when the Nash optimality is used. Also, the increase of the number of collaborators will increase the payoff of each one.