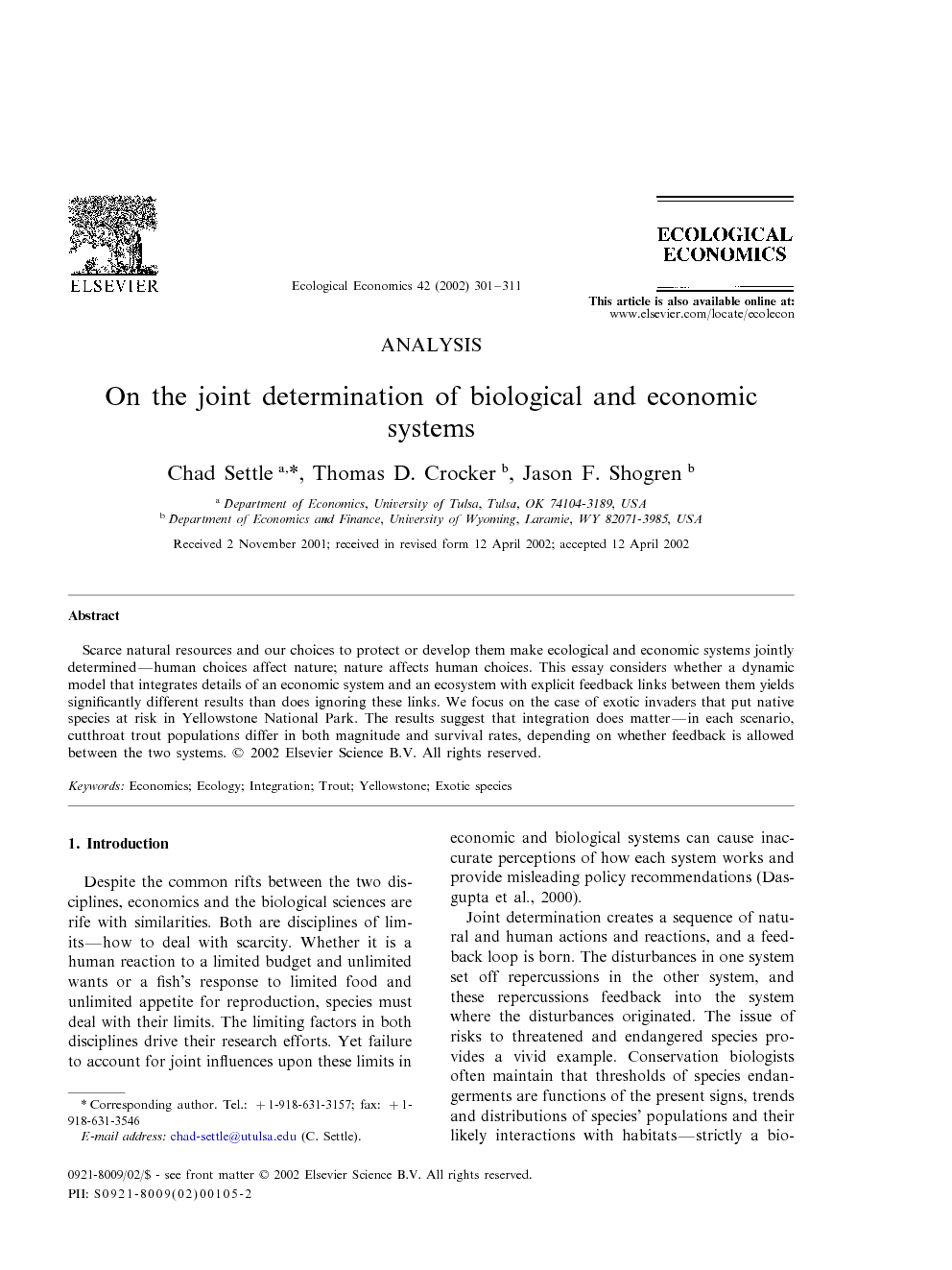 Scarce natural resources and our choices to protect or develop them make ecological and economic systems jointly determined—human choices affect nature; nature affects human choices. This essay considers whether a dynamic model that integrates details of an economic system and an ecosystem with explicit feedback links between them yields significantly different results than does ignoring these links. We focus on the case of exotic invaders that put native species at risk in Yellowstone National Park. The results suggest that integration does matter—in each scenario, cutthroat trout populations differ in both magnitude and survival rates, depending on whether feedback is allowed between the two systems

Despite the common rifts between the two disciplines, economics and the biological sciences are rife with similarities. Both are disciplines of limits—how to deal with scarcity. Whether it is a human reaction to a limited budget and unlimited wants or a fish's response to limited food and unlimited appetite for reproduction, species must deal with their limits. The limiting factors in both disciplines drive their research efforts. Yet failure to account for joint influences upon these limits in economic and biological systems can cause inaccurate perceptions of how each system works and provide misleading policy recommendations (Dasgupta et al., 2000). Joint determination creates a sequence of natural and human actions and reactions, and a feedback loop is born. The disturbances in one system set off repercussions in the other system, and these repercussions feedback into the system where the disturbances originated. The issue of risks to threatened and endangered species provides a vivid example. Conservation biologists often maintain that thresholds of species endangerments are functions of the present signs, trends and distributions of species' populations and their likely interactions with habitats—strictly a biological question. We hold that this perspective is too narrow. Economic circumstances affect the quality of habitat. The circumstances that matter include the relative returns to human users from alternative sites, the relative returns from alternative uses on a particular site, and human welfare. Sites with low relative returns in their ‘highest and best’ use are more likely to be left undisturbed. Moreover, the rich can better afford to set aside quality habitat. Species survival is determined by economic as well as by biological parameters. Lacking unequivocal evidence to the contrary, the validity of separate treatments of the two parameter sets ought to be systematically demonstrated rather than routinely invoked. Models in which economic systems affect ecosystem outcomes are abundant in the economic literature. Fishery and forestry management models incorporate economic function into ecosystem representations (Clark, 1976). In the fishery context, these models often include predator–prey relations, selective harvesting or multiple species and may even introduce a spatial component which humans can influence. But these models are missing an important point of integration—feedbacks. Allowing for fishing pressure or harvest effort in a model accounts for how economic agents can alter the ecosystem. Having fishing pressure or harvesting effort as a constant, however, does not account for how humans adapt to a change in the fishery. With constant fishing effort, as fish populations fall due to an array of biological considerations, the harvest of fish also falls. Integrating economic systems and ecosystems via fishing effort captures this initial change. What it does not capture is how a change in one system can lead to a change in behavior in the other. When the fish species declines, will fishing effort actually be constant? When the fish population declines, an array of economic factors can cause humans to shift their efforts from one fish species to another or from fishing to other activities. This shift in behavior could lead to a different ecosystem steady state than if no account were taken of these feedbacks. This essay evaluates what taking account of the evolution of the details of jointly determined natural and human systems implies for a key, but heretofore empirically untreated, question in the management of environmental and natural resources. Can a dynamic model that integrates an economic system and an ecosystem by formulating the details of feedback links between the two systems yield significantly different results than does the standard practice of giving short shrift to these links? We show how accounting for feedback between humans and nature affects the predicted ecological impacts—the population of a native prey species—caused by an exotic invader in Yellowstone Lake in Yellowstone National Park, Wyoming. The results show how acknowledgement of feedbacks might alter the core propositions, procedures, and public policy implications of both ecology and economics.

Mark Twain said “Pain there was none, nor infirmity, nor any physical signs to mark the flight of time … in Eden”. But when “Eve reached for an apple!—oh farewell Eden, and your sinless joys, come poverty and pain, hunger and cold heartbreak, … strife, …, age, weariness, remorse …” (Twain, 1991). Our aspirations and our temptations have cursed us with scarcity. We yield to human arrogance and ignorance—reaching for and biting the apple, and in so doing, we affect nature, ‘oh farewell Eden’, and thus cause nature to affect us—‘come poverty and pain’. This curse of Adam and Eve says that scarcity and the choices it necessitates make ecological and economic systems jointly determined: human choices affect nature; nature affects human choices. The curse of scarcity matters in the management of exotic invaders in Yellowstone Lake. Our results suggest that a dynamic model that integrates biological and economic systems with explicit treatment of some of the complexities of feedback links between the two systems yields significantly different results than when one ignores these links. In each scenario, cutthroat trout populations differ in both magnitude and survival rates once feedback is allowed between the two systems. For the best-case and the policy scenarios, no feedback leads to a lower estimate of the steady state population of cutthroat trout than does feedback. But with the worst-case scenario, ignoring feedback actually leads the model to a higher estimate of the cutthroat population than does the model with feedback—a steady state population of 1 million versus none. This suggests that basing policy recommendations in Yellowstone Lake on data from models without feedback puts cutthroats at greater risk than would be true if feedback was explicitly considered. The potential policy relevance of the joint determination of biological systems and economic systems and the feedback it implies extends well beyond the Yellowstone Lake case. Policy makers should take the curse of Adam and Eve seriously. Consider AIDS, for example. Traditional epidemiological practice treats a person's decisions concerning frequency of sexual contact and number of partners to be independent of the prevalence of the disease. But concede that people make choices about contacts and partners based on the odds of infection and the benefits and costs of what they can do to influence these odds. The predicted incidence of AIDS will be misestimated if the determinants of people's choices are not taken into account. The light cast by making joint determination visible raises features of the AIDS system which would otherwise go unnoticed. Routine dismissal of the joint determination could compel similar errors in valuing alternative environmental states. For example, the gains from reducing the risk of lead poisoning in U.S. children have been estimated to at least double when one accounts for parents' decisions to reduce children's exposures to and body burdens of lead (Agee and Crocker, 1996). The inclusion of the behavioral interactions of economics and ecosystems for protection of North Carolina brackish wetland acreages leads to an average ninefold increase in calculated benefits (Swallow, 1996). In each case, the added benefits result from combinations of protection expenditures and natural asset price increases avoided, and the effects upon natural asset productivity of human adaptations to these avoided expenditures and price increases. The routine acceptance of the separability of natural events and human adaptations is not just one move in the long line of trade-offs between tractability and completeness which effective science in support of policy requires. The separability question runs much deeper. The habitual invocation of separability obstructs economists' and other social scientists' opportunity—and obligation—to help define the thresholds of human health and ecosystem resilience, which underpin environmental policy. Like the snake in the apple tree of Eden, the invocation does a serious disservice to the common weal. One has to go beyond recognizing that the snake exists—actively seeking out more ways to map the details of scarcity and the jointness of natural and human systems is one path. In their extant studies of environmental–economy interactions, the two disciplines are biased in opposite directions. Ecologists are prone to regard anthropogenic environmental impacts as exogenous parameter shocks; they disregard the complexity of economic systems. Economists tend to view the environment as an aggregate or macro form in which interactions with the form can be dismissed; they therefore disregard the complexity of the ecological system. Explicit recognition of joint determination has an additional advantage: both ecology and economics can be better motivated to account for the complexities of both ecosystems and economic systems.