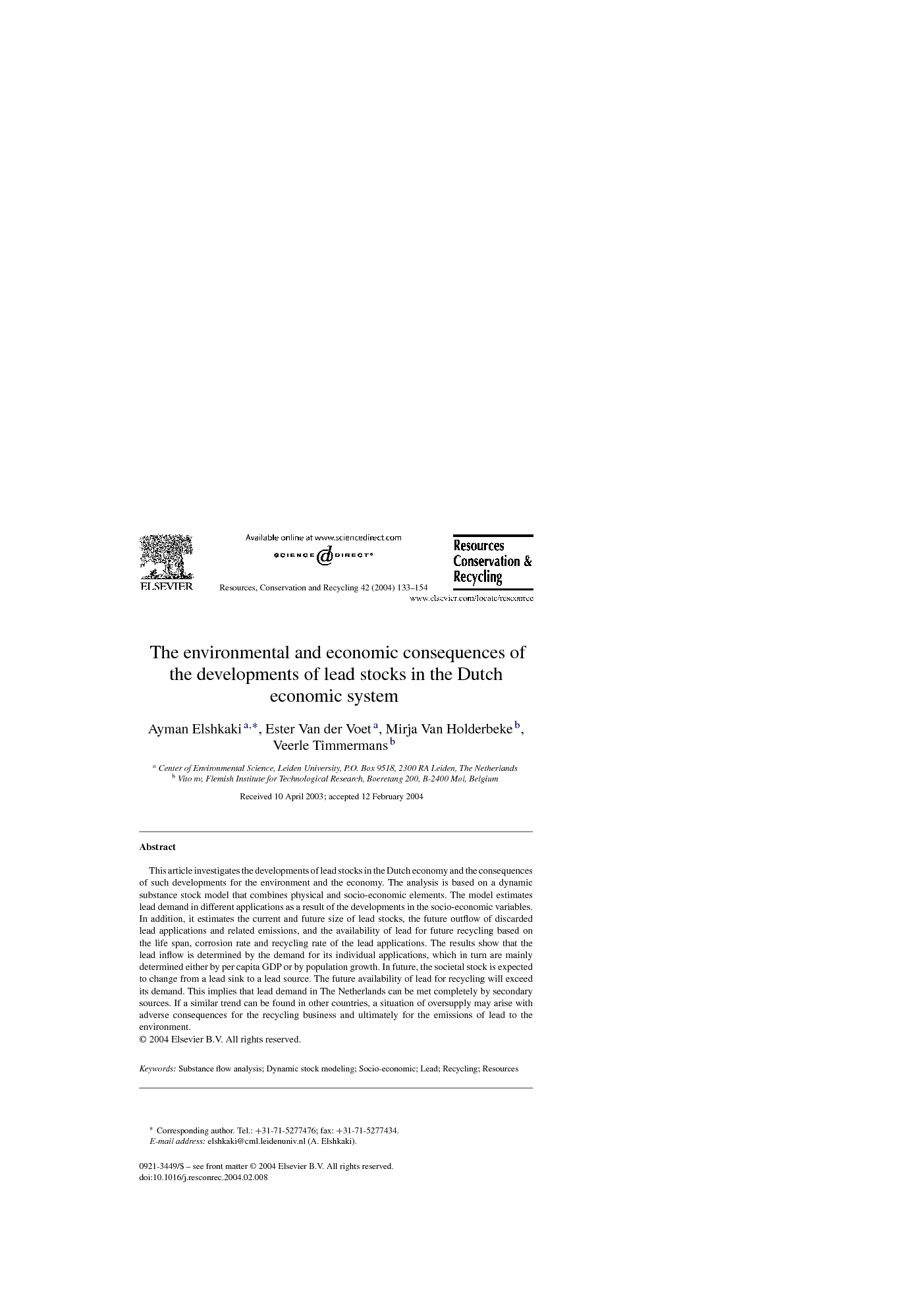 This article investigates the developments of lead stocks in the Dutch economy and the consequences of such developments for the environment and the economy. The analysis is based on a dynamic substance stock model that combines physical and socio-economic elements. The model estimates lead demand in different applications as a result of the developments in the socio-economic variables. In addition, it estimates the current and future size of lead stocks, the future outflow of discarded lead applications and related emissions, and the availability of lead for future recycling based on the life span, corrosion rate and recycling rate of the lead applications. The results show that the lead inflow is determined by the demand for its individual applications, which in turn are mainly determined either by per capita GDP or by population growth. In future, the societal stock is expected to change from a lead sink to a lead source. The future availability of lead for recycling will exceed its demand. This implies that lead demand in The Netherlands can be met completely by secondary sources. If a similar trend can be found in other countries, a situation of oversupply may arise with adverse consequences for the recycling business and ultimately for the emissions of lead to the environment.

Over the last century, the increase of the global population and the growth of the economic activities have been accompanied with an increase of materials demand, and consequently with an increase of extracting, processing, using and waste treatment activities. This has raised the concern about the depletion of resources and the emissions during resources life cycle especially those of heavy metals. Environmental policies aiming at the reduction of the emission of heavy metals include end-of-pipe processes, but also more integrated measures like the stimulation of recycling and the phasing out of hazardous intended (e.g. lead in gasoline) or not-intended (e.g. cadmium in phosphate fertilizer) applications. Although these policy measures seem to be effective on the short term, their effectiveness on the long term is questionable. A well-known example concerns cadmium recycling. On the short term, recycling may reduce cadmium emissions, however, on the long term these emissions will increase due to the fact that the inflow of cadmium into the economy is supply driven (Huppes et al., 1992). This implies that a reduced demand does not result in a reduced supply. A comparable example concerns mercury. The demand for mercury has decreased so much as a result of a strict policy, that its supply can be covered completely from by-product sources, such as from the purification of natural gas. In this case, policies aimed at phasing out or recycling mercury applications therefore will lead to an increase of its stock in society (Maxson et al., 1991). This article investigates the dynamic behavior of lead stocks in the Dutch economy. Lead has been chosen because it is one of the most extensively used heavy metals in the economic processes on the one hand, and because of its toxic characteristics and its accumulation in the economy on the other hand (Scoullos et al., 2001). In The Netherlands, policy aims at a reduction of lead emissions by phasing out certain lead applications and increasing recycling. On the short term, the phasing-out policy has resulted in a reduction of lead emissions (Tukker et al., 2001), while recycling has led to a reduced landfill of lead containing waste. On the long term, however, both types of measures may have unexpected and undesirable side effects, comparable with cadmium and mercury. The present article investigates the consequences of the past and future developments of lead stocks on the long-term lead management. The cases of cadmium and mercury as mentioned above have been analyzed using substance flow analysis (Van der Voet, 1996). These analyses are based on static modeling. It is argued, however, that for long-term management, information is required on the dynamic behavior of substances in the economy (Guinée et al., 1999). Recently, it is acknowledged that including the dynamics in the system is connected to the inclusion of stocks in society (Bergbäck and Lohm, 1997). The dynamics of such stocks are very important for the generation of future waste and emissions. Considering stocks so far has resulted in a few specific substance stock inventories or models (Boelens and Olsthoorn, 1998 and Kleijn et al., 2000). The analysis in this article is carried out using a general dynamic substance stock model that combines physical and socio-economic elements. The article is structured as follows. Section 2 will outline the dynamic stock model. In Section 3, a description is presented of the lead applications and the past and future inflows, outflows, and wastes streams of lead are quantified. Section 4 contains the results of the model calculations and Section 5 is dedicated to discussion and conclusions.

The lead model presented in this paper is a dynamic substance stock model that combines physical and economic elements. By combining physical and economic elements into one model, the limitation of the existing economic and material flow models can be bypassed and their strengths combined. The model operates at two levels: the product level and substance level. This has enabled us to overcome the difficulties of modeling the substance stock: often it is not possible to directly model the substance stock because it is built up out of large number of applications, each showing a different behavior in the economic system. The model calculates the development of the lead stock over time by the inflow and outflow characteristics of the individual lead applications. For each application, the inflow in the past is modeled as a function of the development in certain socio-economic factors using regression analysis. These factors appear to be sufficient to describe the past inflow. The derived model for the past then is transferred to the future, based on expectations about the development in the socio-economic factors. For the future, however, some other variables such as substitution and technological development might be equally important. These are as yet not included. The forecasts therefore are only valid assuming that no unpredicted changes, such as the development of a completely new substitute, will occur. The outflow out of the stock of products-in-use is basically determined by two physical processes: leaching and delay. The leaching outflow, emissions during the use of the product, is modeled as a fraction of the stock-in-use. The delay outflow of waste products is modeled as the inflow of some time ago. Two factors play an important role in determining the accuracy of the outcome of the model, namely the emission factors and the life span. The emission factors are assumed to be constant and the life span is assumed to fit a Weibull distribution. In reality both are subject to changes. Moreover, the estimates of both parameters are rather uncertain. The model estimates the end-of-life treatment in the future-recycling, landfilling and incineration-based on the assumption that the current distribution of the waste stream over the three destinations will remain the same. In reality, these streams are subject to changes because of policy, technical, or economic reasons. In general, lead flows in waste and emissions should not be treated as final figures for several reasons. First, waste streams contain lead flows from other sources as well, such as waste from mining and industry. Loops and cycles within the end-of-life treatment system make especially the figures for landfill quite uncertain. Second, the model quantifies only part of the emissions from the use phase, while other emission sources such as emissions from extraction, production and waste treatment processes are not included at all. The lead model includes most of the intentional applications of lead, which constitute the largest part of the societal lead use. However, some other important applications from an environmental point of view, such as lead in ammunition or in fertilizers, are not included. The picture of the emissions to the environment resulting from the stock model is therefore far from complete. Despite the above-mentioned limitations, the stock model provides relevant information for a substance management. The results of this model can be presented in different ways, depending on the policy issue at hand. For example, the contribution of the different applications to landfill or to diffusive emissions can be specified over time, which is useful information for a waste prevention or pollution prevention policy. Another example is the future estimate of what will become available for recycling. From the model calculations it follows that the amount of lead available for recycling will increase and may even become larger than the demand for lead in the near future. This means that at least in The Netherlands the demand will be more than covered by the supply of secondary lead only. To draw a general conclusion, however, the analysis should be made on a larger scale (regional or global) where import and export do not play a big role. If comparable developments can be detected on a larger scale level as well, this may have consequences for the future management of lead. On the one hand, the demand for lead drops due to phase out policies. On the other hand, the supply from secondary sources increases as a result of the past building up of stocks in society. Moreover, the supply from primary sources still continues and is expected to continue for other reasons besides the demand for lead. All this may have consequences for the lead price and thus also for the profitability of primary production as well as the recycling industry. Consequently, this might increase the landfill and incineration streams at the expense of recycling, and ultimately may lead to an increase in the emissions. The stock model has proven to be applicable and has delivered interesting results that cannot be obtained in any other way. The next step is then to put the stock model as a central module into a general substance flow model. In that way, the picture can be completed and the full implications of the interaction of stocks and flows may become apparent.